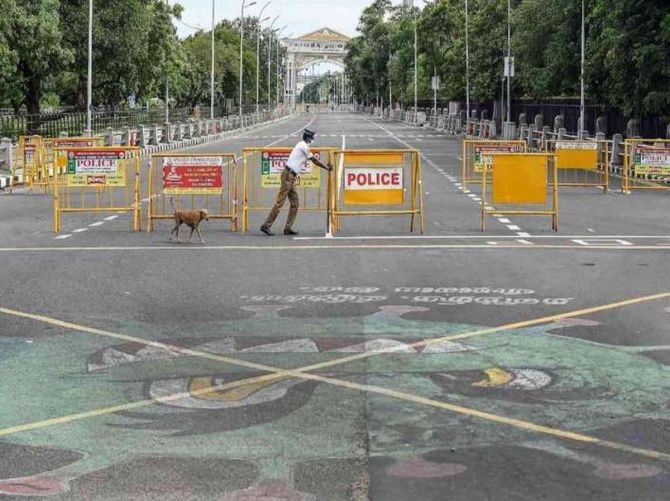 Amid a high COVID positivity rate, Kerala has imposed a triple lockdown in four districts in addition to the statewide lockdown. The triple lockdown is in place in Ernakulam, Thiruvananthapuram, Thrissur and Malappuram.

Entry to these districts is banned, the interior roads are closed and even essential services such as groceries are allowed to open only on alternate days. However, there is widespread confusion over the orders issued by the respective district administrations. There are also complaints that blocking the roads, especially in containment zones, creates hurdles to the people in need of emergency medical care.

As the name suggests, a triple lockdown entails three levels of cubs. The first is locking down assigned districts as per caseload. The second applies to more specific containment zones in those districts. Residents are told to stay strictly indoors and the areas are cordoned off. The third lockdown is for houses where patients and their primary contacts reside.

The Kerala Government Medical Officers Organisation (KGMOA), the collective of doctors in government service in Kerala, has already expressed concern over the cordoning off of roads impeding the movement of health workers and people in need of medical care. Talking to The Federal, Santhosh Babu, Thiruvananthapuram District President of the KGMOA, said that as the entry to national highways is blocked, he wasted 1.5 hours this morning on his way to the hospital.

“I live in Pongumood, which is only a few kilometres away from Thiruvananthapuram Medical College. This morning I found that the byroads to the highway were completely blocked and left unmanned. What if an ambulance passes by? There are a lot of people who’ve tested positive and living in home isolation in these areas,” asked Santhosh, an anaesthetician at the Women and Children Hospital at Thycaud.

He added that closing down the roads and leaving them unmanned could prove fatal for those in need of critical medical care. As his hospital performs deliveries, he is often called in at odd hours.

Santhosh’s fear is not unfounded. Vinod, an ambulance driver who transported a dialysis patient to the Medical College Hospital, Thiruvananthapuram, found the road blocked at Chenkottukonam, 9 km away from the hospital. He has taken a video of the ambulance waiting behind the barricade for want of police permission, and shared it on social media.

“The road was clear when I went from the Medical College to Nerikkal, the village where the patient lives. By the time I came back, many small roads were closed. I took a longer route and reached Chenkottukonam, but the cops refused to let me go. They were not even ready to verify that there was a patient in need of dialysis,” Vinod told The Federal.

He observed that such unmindful application of rules only defeats the objective of saving lives through lockdowns.

Similarly, closing down grocery shops on alternate days and reducing their working hours only creates crowding, said some. There was a lot of criticism on social media on the irrationality of these decisions.

For instance, the district collector of Malappuram instructed people to carry ration cards while going to grocery shops. This is irrational and uncalled for, said critics.

Restaurants are allowed to operate; they cannot offer parcel service, but online delivery is allowed.  According to small and medium restaurant owners, this only helps larger outlets that are networked with online services such as Swiggy and Zomato. A large number of people depend on food purchased from small eateries, and the curbs hit them hard.

While questions pile up on the Facebook pages of district collectors demanding clarity, no responses have been given so far.

Over the past few days, Ernakulam, Malappuram, Thiruvananthapuram and Thrissur have consistently shown alarmingly high levels of case positivity, ranging from 24% to 26%. Strict curbs are meant to keep people home, say police personnel.

“This is to give a message to the people to sit at home as best as possible. We are taking decisions on a case-by-case basis, though,” said a cop checking vehicles at Kalamassery in Ernakulam. “There are lot of vehicles on the road, but all have genuine reasons. So far, we have sent back only one person who had no emergency purpose.”

State Police Chief Loknath Behra has said there is clear instruction to allow health workers, sanitation workers and media persons to travel without hindrance. “The administrative orders should be self-explanatory. The District Collectors cannot issue incomplete and confusing orders only for the reason that they can evoke the Disaster Management Act. People will not adhere to these rules if they do not understand the logic,” said High Court lawyer Harish Vasudevan.

AAP govts claim on implementation of one nation one ration card misl...