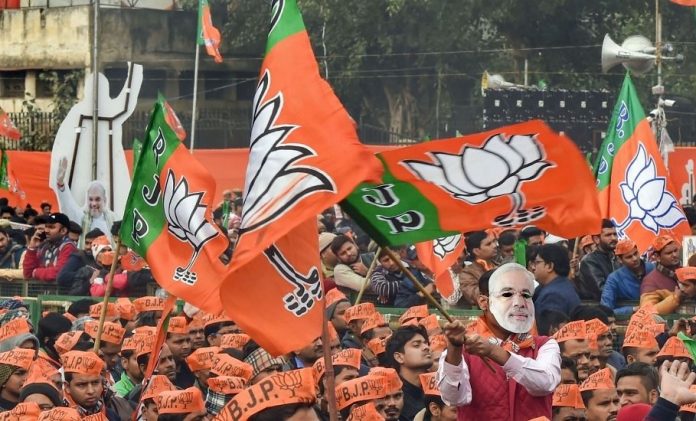 As Kerala goes to the polling booth today (December 8) for electing local body members, the BJP in the state is eyeing to capture two corporations and a few municipalities in addition to strengthening the vote base in rural pockets where the party had shown a significant presence. (The polling for the first of the three-phase elections started in the morning).

The recent allegations of scams that put the LDF government in the dock are the central themes of the campaign for the party in general. The election to the local self-government is largely governed by local issues and the individual popularity of the candidates, yet politics plays a major role as this is being considered a curtain-raiser to the state Assembly election to be held in 2021.

In the present scenario, the party has only very marginal representation in civic bodies. The NDA could win 14 grama panchayats and one municipality, but could not grab a single block panchayat, district panchayat or corporation in 2015. This time, the BJP hopes to win Thiruvananthapuram and Thrissur corporations and to increase the seats in Kollam, Ernakulam, and Kozhikode corporations.

In the 2015 election, the saffron party won 35 wards out of 100 in Thiruvananthapuram Corporation. Thiruvananthapuram is the only district from where the BJP could manage to send one member to the Legislative Assembly (O Rajagopal from Nemam) in 2016. The BJP hopes that there is a significant change from 2015 in which the party could not make much headway.

“We would win two corporations at least, and not less than 200 grama panchayats, and six to seven municipalities too,” K. Surendran, the party chief in Kerala told The Federal, and added that the BJP has made substantial growth in the urban and middle-class voters of Kerala.

“Corruption by both the ruling LDF and the opposition UDF is the central theme of our campaign. That apart, not less than 40 lakh families in Kerala have received the benefits of various schemes instituted by the central government,” says Surendran.

The BJP has a history of slow but consistent growth in terms of vote share in the state. The NDA grabbed 15% votes in the 2016 Assembly election which was a giant leap from the average vote share of 5 to 6% till then. In the 2014 Parliament election, the NDA had a vote share of 10.85 % that grew into 15% in 2019 of which BJP alone accounted for 13%.

In Kerala, the BJP has to play a different game compared to what they do in other states. The allegations of corruption against the government as well as the opposition and the welfare schemes being launched by the Centre are the central themes of the campaign for the party in Kerala.

The party does not visibly give much focus on issues like “Love Jihad” and conversion in campaigns. Even ‘Sabarimala’ has not been there in the limelight. Surendran, who was the poster boy of Sabarimala protest last year, is not very confident about bringing the issue back to the central stage. He told The Federal that “Sabarimala may have only very little impact this time”.

However, the BJP has not rolled back from raising communally volatile issues as they usually do. The communally charged messages have been spread mostly through WhatsApp and family meetings. A recent video of Krishna Kumar, actor turned BJP activist shows that the party takes up communal issues clandestinely while being loud on other issues like corruption. In the video, Kumar calls for casting vote on behalf of Lord Ayyappa. He says that “our duty is to cast a vote for the lotus and the rest will be taken care of by Ayyappa”.

The LDF raises the allegation that there is a widespread understanding between UDF and BJP. “The NDA does not have candidates in not less than 5,000 wards. There are common independent candidates for the UDF and BJP in several wards,” says A.A. Rahim, the state secretary of Democratic Youth Federation of India.

On the other hand, fringe Muslim groups like Welfare Party (the political party of Jamaat e Islami) too go with UDF hand in hand. In the Lok Sabha election last year, the Welfare Party’s open call to vote in favour of the UDF is believed to have been resulted in a massive erosion of Muslim votes as far the Left is concerned. M.B. Rajesh, former MP and the state committee member of the CPI(M) calls it a “rainbow coalition of communal forces against the Left”. “This is sufficient enough reason for the secular people to extend their support to the Left,” says Rajesh.