As incessant rains continue to batter Kerala, the India Meteorological Department (IMD) has issued a red alert (extremely heavy rain) for 10 districts and orange alert for the rest of the state on August 2 and August 3.

Red alerts have also been issued across seven reservoirs of the state with water level in several dams inching fast toward the flood-warning mark. 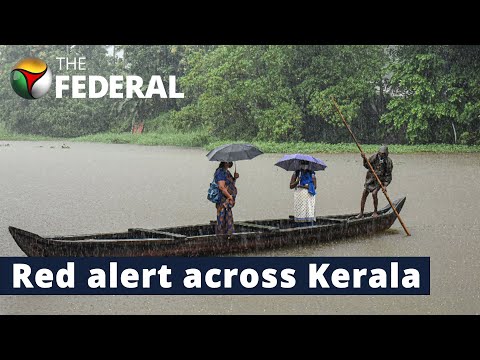 Invoking grim memories of the devastating floods of 2018, several areas in Kottayam, Pathanamthitta, Alappuzha, Ernakulam, Thrissur and Kannur districts have already been inundated and rescue operations are underway to save life and property.

Relief camps have been opened all over the state and nine companies of National Disaster Response Force (NDRF) have been engaged in relief and rescue operations in different locations.

Landslides have been reported in Kottayam and Kannur districts while roads and bridges in hilly terrains have been washed off by torrential rains. A two-and-half-year-old girl died in a landslide in Vellara in Kannur while the family was trying to escape. The girl was swept away by the floodwaters when the grip of her mother on her wrist loosened due to the water current.

According to the Kerala State Disaster Management Authority (KSDMA), extremely heavy rainfall (more than 204 mm rain in 24 hours) and high intensity rainfall (above 50 mm rain in an hour) may cause flash floods and landslides over the next two days.

The Central Water Commission has issued flood alert across southern and central Kerala in view of the swift rise in the water level of the three rivers, Manimala, Meenachilar and Achan Kovilar.

Revenue Minister K Rajan has assured that the state is well-prepared to minimize human casualties.

“The revenue and local administration along with the disaster management authority have undertaken a coordinated effort to shift people living in low lying areas to camps,” he told reporters.

Rajan said that people in low-lying or vulnerable areas are being shifted in advance instead of being rescued after the flooding. Maps of flood and landslide-hit areas have been already prepared by the KSDMA in advance and were distributed to the local administration even before the onset of the southwest monsoon.

In 2018, Kerala received 300 to 400 mm rain in several places across the state. Hence the possibility of 200 mm rain in 24 hours for the next three days (till August 4) brings the danger of flash floods and landslides along with a rise in the water level in key reservoirs.

Ministers camping in various rain-hit districts are coordinating the relief and rescue activities. Chief Minister Pinarayi Vijayan has said that around a thousand people have been evacuated and sent to 47 relief camps across the state.  The tourism centres in Kerala have been closed down and night travel to hilly terrains has been banned.

Kerala experiences the longest and heaviest spell of rains during the Southwest monsoon (from June to September). Even though the state receives rain across all the four seasons, 60 to 70 per cent of the rainfall (in one year) is received in this season. Considering the seasons, it is pertinent to see that Kerala receives rain almost all across the year.

It has been statistically proved that weather forecast is a tough task in Kerala. In six years, between 2011 and 2021, Kerala received excess rainfall than predicted by the IMD. The data of the rainfall since the last 17 years show that the rain forecast often go wrong in the state. For 10 years, between 2005 and 2021, the state has received surplus rainfall.

Learning lessons from the 2018 floods, the KSDMA, in a precautionary measure mapped the flood-hit areas of the state as well as locations vulnerable to landslide and distributed it to the local self-governments.

“The local administration is authorised to take the lead to coordinate the activities of disaster preparation based on the highly localised maps and weather information given to them. Kerala could successfully bring down the human causality after 2018 by the disaster preparedness adopted by KSDMA,” an official told The Federal.