Former Union minister and controversial BJP MP Anantkumar Hegde on Sunday (April 26) fired a salvo against Twitter India for its alleged anti-India stand and blocking him with very prejudiced intentions.

The MP from Uttara Kannada has also written to Prime Minister Narendra Modi against the Digital colonisation by a corporate entity.

Hegde, in a Facebook post on Sunday said he took offence against a Khalistan supporter and the hidden agenda of the Tablighi Jamat movement within India.

He said he had written to the Prime Minister and Home Minister Amit Shah on April 20 against Gurupatwant Singh Pannun advocating independence of Punjab by advocating
formation of Khalistan. 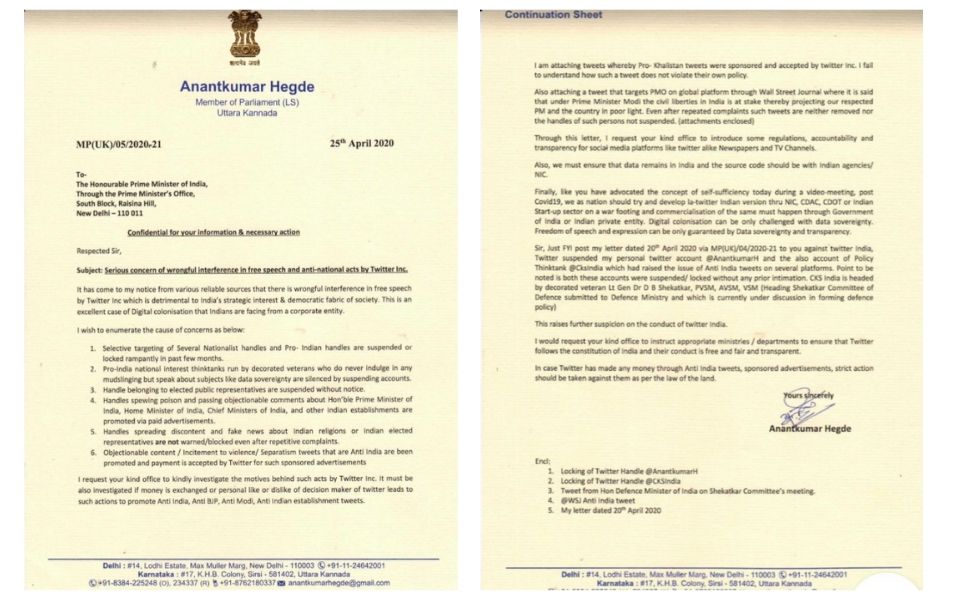 The MP shared the message he received from Twitter where he was asked to delete the tweets that violate its rules. Twitter also said that if he felt that it has made a
mistake, he can appeal the violation. Hegde said he would not delete the tweet “because it was to expose the wrong being done under the umbrella of a
religion.

Undoubtedly I am not against any religion, but being an Indian, I will never allow any person or organisation to spread hatred or to provoke people to indulge in any anti-
social or anti-national activity.

“I stand affirm on my statement and will defend it strongly,” Hegde stated. The MP wrote to Modi on Saturday against Twitter India about “selective targeting” of several national handles and pro-Indian handles by suspending or locking rampantly in the
past few months.

He also charged some twitter handles with targetting the Prime Minister and Home Minister for their own pecuniary interests.

Hegde demanded that the selective targeting by Twitter be investigated.

Hegde has a history of making controversial remarks.

Earlier this month, the state Congress had accused him of giving a call that Tablighi people should be shot down in the backdrop of a religious meet of the organisation in Delhi
turning into a coroanvirus hotspot.

In February this year, he had reportedly claimed that the entire freedom movement was staged with the consent and support of the British, and the independence movement led by
Mahatma Gandhi was a “drama”,drawing the BJP leaderships ire.

He had earlier opposed the state celebrations of Tipu Jayanti during Congress rule in Karnataka since it was started in 2015 and had called the festival a “shameful event
glorifying a brutal killer.”

In 2017, as a union minister he had kicked up a row saying that the Constitution would be changed, but later apologised in the Lok Sabha after facing flak.