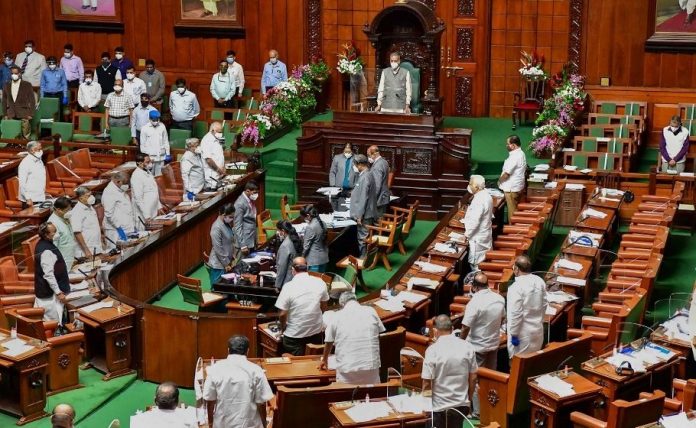 The joint session of the Karnataka Legislature, set to begin today (January 28), is likely to be a stormy affair with opposition Congress all geared up to corner the state’s BJP government over a series of issues including the recent accident in illegal mines in Chief Minister BS Yediyurappa’s home turf Shivamogga that resulted in five deaths.

Besides, the legislature is likely to witness feisty exchanges over corruption charges against the chief minister in which the Karnataka High Court has allowed restoration of a criminal case against him and others, the anti-cow slaughter ordinance, farmers’ protests, and the border issue with Maharashtra.

Over the past week, Congress leader Siddaramaiah, also a former chief minister, attacked the government saying illegal mining was rampant in the state and it could not be possible without the support of the chief minister. He further alleged that Rural Development Minister K. S. Eshwarappa had instructed officers to turn a blind eye to illegal mining activities in the state.

The Congress leader said a BJP MLA (Ayanur Manjunath) has claimed that there are over 100 illegal mining sites in Shivamogga. “Who is responsible for illegal mining at such a large scale in the home district of the Karnataka chief minister?” Siddaramaiah asked.

Illegal mining is rampant in the State flouting all the rules of Mines & Geology department.

It is impossible to carry out illegal mining without the support of @CMofKarnataka @BSYBJP.

On the farmers’ agitation too, he said that the Yediyurappa government will have to pay the price for his anti-farmer stand and atrocities against them.

Besides, Maharashtra Chief Minister Uddhav Thackeray raking up the border row and issuing a veiled threat to Karnataka, will also be a point of discussion during the joint session.

Thackeray on Wednesday asserted that Marathi-speaking areas in Karnataka will be included in Maharashtra. He further said that areas dominated by Marathi-speaking people on the state’s border with Karnataka should be declared union territory until the Supreme Court delivers its final verdict on the issue.

MLAs from the bordering districts (particularly in Belgaum) of Karnataka are requesting the government to send a strong message to the neighbouring state even as Yediyurappa has said in the past that Thackeray’s demands were obnoxious and regionalism talks are detrimental to national unity.

Related news | In the name of the cow, Karnataka’s ordinance slaughters civil liberties

Reacting quickly to the developments, Karnataka Deputy Chief Minister C. N. Ashwathnarayan asserted whoever lives in Karnataka is a Kannadiga. “We’re the only state to constitute a (development) board for Marathi speakers’ welfare. It’s unfair to create an issue unnecessarily. We’re all Indian,” news agency ANI quoted him as saying.

In November 2020, the BJP government in Karnataka formed a Maratha development corporation aimed towards financial, social, educational, and religious development of the Maratha community in the bordering areas.

Also, with the state government bringing the anti-cow slaughter ordinance without discussion in the legislature, the contentious law is set to come to the fore again during the joint session.

Election to the posts of chairman and deputy chairman of the Legislative Council are also likely to be held during the session. The last session was adjourned sine-die with the BJP-JD(S) combine trying to remove Council Chairman K Pratapachandra Shetty, a Congress leader. The two parties had served a no-confidence motion against him, but faced legal hurdles. Reports suggest the chairman cannot be removed without filling the post of deputy dhairman, which had fallen vacant following the alleged suicide of SL Dharme Gowda, who was claimed to be upset over being manhandled during a council proceeding.

For Chief Minister Yediyurappa, who’s struggling with cabinet reshuffle and has changed portfolios four times in the past week after his initial cabinet expansion on January 21, the most important task would be to convince the rebels and disgruntled old guards within the party.

He tried to rope in his Lingayat legislators and former ministers, Umesh Katti and Murugesh Nirani, into the cabinet by giving them plum portfolios of Food and Civil Supplies and Mines and Geology respectively. Both had expressed displeasure in the past over not getting a cabinet berth early on.

Social activist and industrialist Alam Pasha, who had filed corruption charges against Yediyurappa, Nirani, and others in the past, wrote to Prime Minister Narendra Modi urging him to intervene and remove Nirani as a minister as he faces criminal cases. Pasha threatened to launch a hunger strike before Vidhana Soudha if Nirani is not removed from the cabinet.