The Karnataka government’s decision to operate intra-state buses to help migrant workers return home is pushing many of them into a debt trap as they are being charged exorbitant rates for the travel.

On Saturday (May 2), nearly 5,000 migrant workers and some people working in the IT sector reached the Majestic Bus Stand to take buses to their respective locations. But many were in for a rude shock as the government charged them two to three times the regular fare. The charges were for the round trip though it was a one-way journey. Besides this, the government added toll charges to the fare.

After furore by civil society groups and migrant workers, the government said it would charge one-way fare henceforth. The announcement was made around 3 pm, but by then nearly 40 buses had already departed after charging the migrants for the round trip. From Bengaluru to Bidar, the bus fare is ₹1,984. To Kalaburagi, it is ₹1,619, Belagavi ₹1,478, Bagalkot ₹1,311, Gadag ₹1,070 and Ballari ₹884.

With the crowd swelling every single hour, the social distancing norms and compulsory wearing of masks went for a toss. Many people had no choice and the government hadn’t made enough arrangements. By 6 pm, about 90 buses had carried 2,700 people to various districts in the state. The government arranged these buses depending on the demand for travel to a specific location.

“We walked 5 km to reach the bus stand. After reaching, we were told that we had to pay ₹1,411 a person. We are a group of 15 people, including two kids. How can we arrange such a large amount all of a sudden,” asks Mallamma, a migrant worker who was waiting to return to Yadgir district. 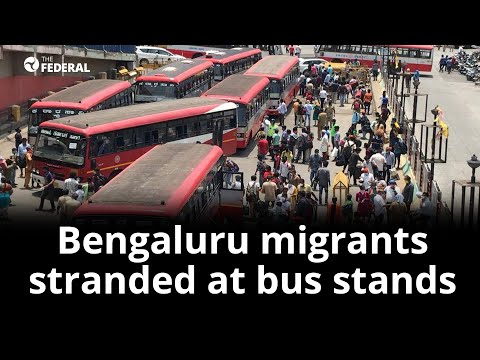 Mallamma’s husband sent two members of his family to take a loan from where they had been working so that they could return home. “All we want is to return home. If someone gives us money, we will surely repay them once we reach home. We can neither stay at the bus stand for a long time, nor can we walk back home,” Mallamma says.

Mallamma has been working as a construction labourer in the city for a decade now. She returned from the village only in February, but the entire family is desperate to go back as they cannot find any job due to the lockdown. It has hit them hard. “For the last one month, we could not earn anything. How could we pay the huge amount?” she asks.

The state has also limited the number of passengers. Each bus with a capacity of 55 passengers will run with 30 people. Though the idea is to maintain distance between individuals during the travel, the government has charged the migrants for the vacant seats. This is the plight of many other migrants too.

Many people were waiting for helping hands to lend them some money so that they could return home. However, authorities were not lenient with those who could not afford the high fare, but had walked all the way to the bus stand.

Having worked in a finance firm in the city for 14 years, Anil Kumar wanted to return home as his parents were worried. Though he wanted to go to his native Koppal, there weren’t enough people to travel with him on the same bus. So he waited for nearly four hours to get the bus. “I can afford to pay the fare, but not all migrants who work as daily wagers,” he says.

The government had planned to operate only 100 buses on May 2. So, around 600 people were waiting for the buses in the evening. They either had to walk back with the luggage to the place where they had come from or will have to wait at the bus stand, taking the risk of contracting the virus.

Between April 24 and April 30, deputy commissioners (DC) were bringing migrants to their respective districts from different cities at free of cost. However, after the Union Ministry of Home Affairs issued an order allowing special buses to transport stranded persons, the state government announced that the people should bear the cost.

The transport department has pointed fingers at the state and the Centre. “The buses were run based on an agreement that the respective DCs would bear the cost. So we did not charge the people initially,” BT Prabhakar Reddy, divisional controller of Bengaluru, told The Federal. “However, the state government decided to stop this, following the MHA’s orders. So we just followed the state’s decision to charge them.”

With rumours spreading, many migrant workers from Bihar, Uttar Pradesh and other states walked to the city hoping they would also be able to return home without any hassle. But they had to apply online at sevasindhu.karnataka.gov.in, or register at Bangalore One Centres and BBMP ward offices in the city. The state is yet to decide on the train service.

Related News: How the COVID-19 lockdown changed the course of a migrant worker’s life

The government’s idea was to draw an estimate before resuming the inter-state bus services.  With news spreading that the government is arranging for buses for migrants, several contract workers in the Bangalore Metro Rail Corporation decided to go home. However, they had no money as the contractor had not paid them for February and March, they alleged.

Anil Gupta, a migrant working for URC Construction, said nearly 700 workers were yet to get paid. URC is in a joint venture with BMRCL to build the Metro Rail in Bengaluru. But BMRCL Chief PRO BL Yeshwanth Chavan denied the chares and said all workers had already been paid.

Ekta Mittal is the co-founder of Maraa, a media and arts collective in Bengaluru that is working to help BMRCL contract workers. Though representatives from the company tried to persuade the workers to continue work, they were determined to return home given the hardship they faced last month, says Mittal.

“Poor communication from the Central and state governments has led to a chaos which also puts the workers at a greater risk of contracting and transmitting the virus,” Mittal says.