Karnataka witnessed the highest single day spike in cases with 129 COVID-19 positive cases reported between 5 pm on Monday (May 18) till 12 pm on Tuesday (May 19). According to the health department data, the total number of cases rose to 1,373, of which 802 are active.

Almost 62 per cent of the fresh cases reported (317) since May 16 entered the state borders via domestic travel after which the state decided to allow people from states like Gujarat, Maharashtra, and Tamil Nadu in a staggered manner, while special cases will be allowed on request. Even as it included Kerala in the list, later, the government issued a clarification saying “Kerala isn’t in the list of restricted states.” 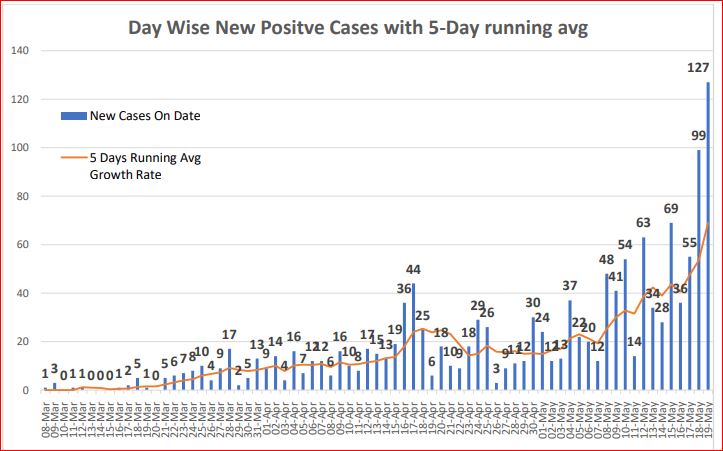 The spike comes amid the state government led by B.S. Yediyurappa eased lockdown restrictions to encourage the businesses to resume operations.

Even as more number of cases were reported in Bengaluru and Mysuru in the initial days with most of the patients having travel history, besides the cases from the Pharma company in Nanjangud cluster in Mysuru, the recent rise in cases in North Karnataka are attributed to inter-state movement of people.

Mysuru and Kodagu that reported no positive cases for almost two weeks, witnessed fresh cases this week. The health department officials resorted to institutional quarantining after domestic travellers returned to the state and tested positive.

Nearly half of the active cases are in North Karnataka districts of Belagavi, Kalaburagi, Davangere, Bagalkote, Vijayapura, Bidar, Gagad, Raichur, Haveri, and Koppal. 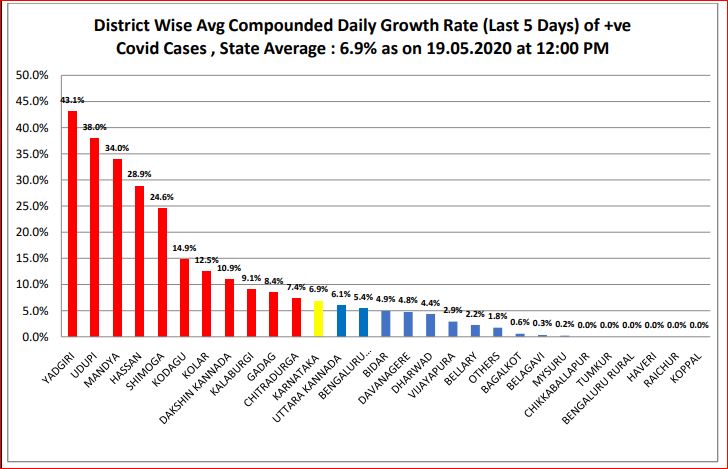 Officials now plan to micro manage the containment zone with the help of ASHA workers with rigour to improve the testing and contract tracing amid rising cases in new districts. Pool testing will also be implemented for those having domestic travel history.

“People coming from other state, those having mild symptoms will be placed under institutional quarantine. But the asymptomatic will be stamped and home-quarantined,” Commissioner for Health and Family Welfare Pankaj Kumar Pandey said.

While the positivity rate remained at one per cent of the total tests conducted, the state has a doubling rate of 13 days as compared to Kerala which had 43 days, Telangana-31 days, Andhra Pradesh-21 days. Tamil Nadu has the doubling rate of 11 days as per the government’s daily bulletin.

Yadgir in North Karnataka, Mandya  in southern region, and Udupi in the coastal area are emerging as the hub with the growth rate in cases ranging from 35-43 per cent on a daily basis in the past two days. 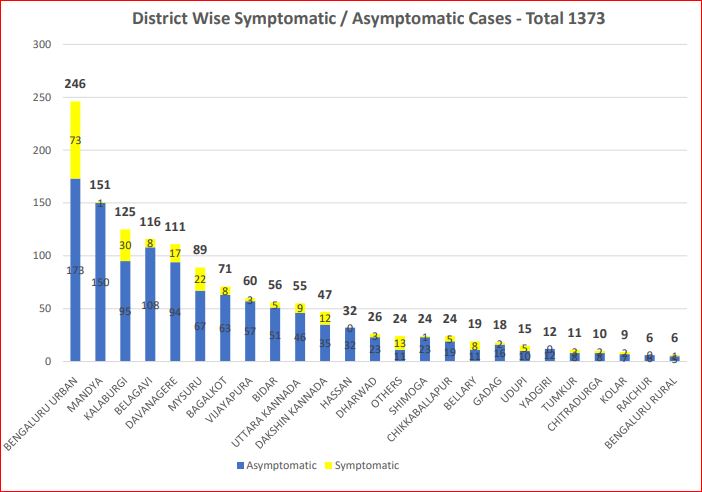 Officials in the health department attributed the rise in cases to increased testing in the wake of inter-state travel. “While the state tested 5000-7000 cases every day in the past week, the government plans to rise the testing capacity to 10,000 by may end,” Medical Education minister K Sudhakar said.

Meanwhile, the state plans to conduct a survey of vulnerable population through ASHA/ANMs in Karnataka for early identification of COVID-19.

“Compulsory pool testing of such people will be done for early identification of COVID-19. Pregnant women, lactating mothers, cancer and TB patients, HIV patients among others will be checked for influenza like illness,” Pandey said.