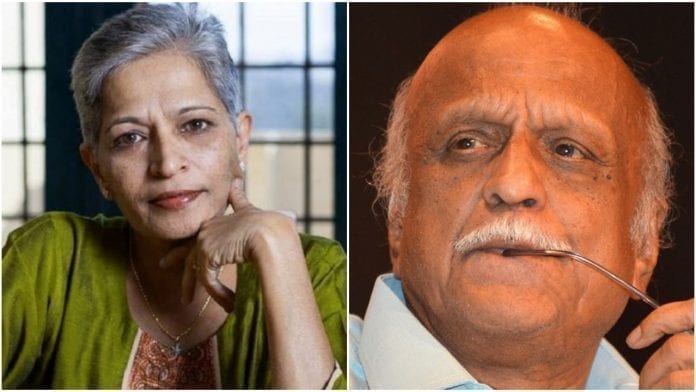 The murders of Kannada academician MM Kalburgi and journalist-activist Gauri Lankesh was a poll-issue during the Karnataka Asssembly elections in 2018. However, a year later, it has gone unnoticed in the run-up to the Lok Sabha election, with the exception of Prakash Raj, actor-turned politician contesting from Bangalore South seat, who was angered by Gauri’s death.

Lankesh, a fierce critic of Hindu nationalist organisations, was shot dead at her home in Bengaluru on September 5, 2017. She was the editor of Kannada tabloid ‘Lankesh Patrike’. Two motorcycle-borne assailants shot her as she was entering her house. The state police took suo motu cognizance of the case.

Similarly, Kalburgi was shot dead at his house in Dharwad on August 30, 2015. Two motorcycle-borne assailants killed him after gaining entry into his house by posing as students.

The incident was fresh in the minds of the people, and has remained a poll plank for both leading parties—the BJP and the Congress. Congress leaders took at dig at the BJP as Hindu extremists were involved in the murders. They tried to garner support to get anti-Hindutva votes. Meanwhile, the BJP said the murders took place during the Congress regime in the state and that they had failed in maintaining law and order in the state.

BJP MP Shobha Karandlaje alleged that then Chief Minister Siddaramaiah falsely pinned the murder on a Hindu youth. The party’s state chief B S Yeddyurappa sought people to vote out the Congress government led by Siddaramaiah for not maintaining law and order.

While a special investigation team (SIT) of the Karnataka Police investigated Lankesh’s case, the criminal investigation department looked into Kalburgi’s case. Ahead of the Assembly elections, six months after her murder, the SIT made its first arrest. The arrested man, Naveen Kumar, was a member of the Hindu Yuva Sena, a right wing organisation. It gave an arm for the Congress to point fingers at the saffron party. Activists across the state appealed to voters to defeat the BJP and preserve Gauri Lankesh’s legacy.

With the Congress-JD(S) combine coming to power, the case was on the fast track and the police arrested about 16 people by October 2018, a year since her death. The Karnataka government found evidence that the two murder cases were linked.

Two other rationalists—Narendra Dabholkar and Govind Pansare—were murdered in a similar manner in Maharashtra, and investigation agencies suspected that all these murders were interconnected.

Meanwhile, while many criticised the Prime Minister’s silence over the deaths, Pramod Muthalik, belonging to the Sri Ram Sene, another right wing group, said the PM was not expected to respond each time a “dog dies in the state”.

In November 2018, the SIT filed a 9,235-page chargesheet and the case remains pending trial. Investigating officer MN Anucheth refused to divulge any details, and said the investigation was complete and it that it was up to the court now.

After Kalburgi’s wife filed a case in the Supreme Court asking the court to order transfer of case from CID to SIT, the bench ordered the SIT to take over Kalburgi’s case as well. Meanwhile, the Karnataka government submitted to the Supreme Court that both the murders were linked. The Dharwad bench of Karnataka High Court now monitors the case. It ordered the CBI to look into all the four cases and see if there was a pattern.

Taking note of the case, the Bombay High Court in April came down heavily on the Maharashtra government for its snail-paced investigation into Dhabolkar and Pansare cases.

While courts monitor the cases, many fear that investigations into the cases may get delayed if the BJP came to power again.

This election season, issues like the Pulwama attack, Rafale deal and national security took the limelight, relegating the murders to the shadows.