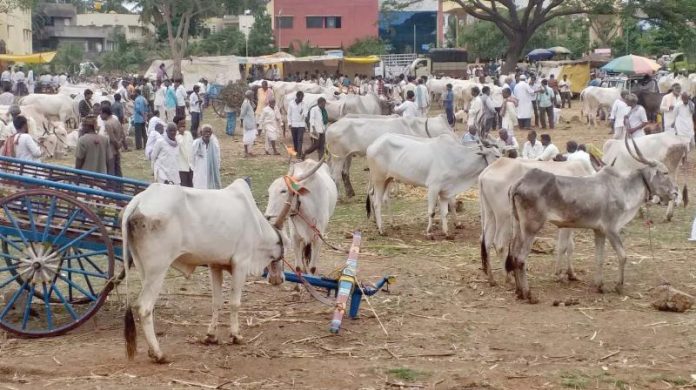 The ill-conceived Karnataka Prevention of Slaughter and Preservation of Cattle Act, 2020, passed in February this year, with the stated purpose of protecting cattle and increasing the breed of cattle, has brought the entire industry dependent on this trade, “to its knees”.

The situation has been further aggravated by the adverse economic impact of the COVID pandemic and unplanned lockdowns. The BJP-led Karnataka government has brought on more misery for the people largely dependent on the livestock sector in one way or the other.

This is the outcome of a November 2021 study led by public health specialist Sylvia Karpagam and independent researcher Siddharth Joshi. Titled “Criminalizing Livelihoods, Legalising Vigilantism: The Adverse Impact of the Karnataka Prevention of Slaughter and Preservation of Cattle Act, 2020,”  the report analyses the fallout of the legislation on various communities including farmers, cattle transporters, slaughterhouses, skin and hide curing units, butchers, eateries, street vendors and consumers.

It also exposes the hollowness of the justifications provided by the government for enactment of the 2020 Act since it “ betrays a complete lack of understanding of how the cattle production cycle works, and the utter disregard for the destructive impact it is going to have on the lives, incomes and livelihoods of the those who are part of the long chain of economic activities sustained by slaughter of cattle”.

People dependent on the cattle trade, such as the tallow merchants, cleaners, loaders, tempo drivers, shop workers, roadside vendors, eateries and those in the slaughterhouses have lost jobs and have not received any form of support from the government even for basic livelihood.

Talking to The Federal, Sylvia Karpagam said the government’s argument that this ban is to increase the indigenous cattle population is not happening. “In fact, it is leading to a lot of stress among farmers, as they are not able to maintain the unproductive cattle and letting them go.” They are completely in distress as thriving cattle markets in the state which were the hub of economic activity have seen markedly reduced footfall which has impacted both buyer and seller.

Moreover, this ban has opened the doors to vigilantism, she pointed out.

“Self-appointed gau rakshaks stop people transporting beef on the highways. Their vehicles are seized and confiscated by the police leading to huge losses. There’s a lot of extortion happening and harassment, which had led to less buyers,” she said, adding that they have now become vulnerable to physical violence and even death like in other states.

The nutritional value of beef

This Act is also affecting the consumers. Dalits, Muslims, Christians, Other Backward castes (OBCs) and Adivasis consume beef, which is one of the cheapest nutrient dense foods. 100 gm of lean beef provides 54 per cent of the daily protein requirement, and the nutrients are digestible and well absorbed.

According to Karpagam, the nutritional indicators of Karnataka are alarming and expected to worsen as a direct consequence of the post COVID-19/lockdown economic downturn. “there is a lot of malnutrition in children in Karnataka like the rest of the country, there is a need for more nutritive food, better livelihood and better income. It is also a fact that most of the social security and nutrition-support schemes like the ICDS and the mid-day meals schemes, have stopped functioning or have been completely inadequate in their functioning,” she said.

The report pointed out that the politics around beef by the current BJP government at the Centre and State should be viewed in the larger context of targeting minorities economically, socially and politically. Combined with the adverse affects of the pandemic, the cattle slaughter ban in Karnataka is perceived by many as a concerted effort by a right wing government to bring the Muslim community to economic destitution. This is an Act that is essentially anti-Muslim in intent and implementation.

But what has become clear is that people across religious groups have been affected by this Act. For example, the Dalit community has worked for generations with cattle meat, hides and many of its body parts.

The report concluded that the government should take cognizance of the enormous damage to livelihoods, nutrition and mental health that this poorly thought out Act has caused and revoke the Act in its current form. Further, it should be ensured that no person or community involved in the cattle business will be harassed, threatened or abused for their occupational, cultural or nutritional choices.

Karpagam pointed out that the Act must be repealed or at least, to allow the slaughter of animals such as the bull and foreign cows.