Ongoing festival season and fear of yet another lockdown in the midst of rising COVID cases in Karnataka are forcing migrants to return home once again.

While travel between states remained affected due to transport workers’ strike, there was no chaos unlike April last year when a mass reverse exodus, coupled with severe intra-state transport restrictions, led to lot of inconvenience for the migrants.

Currently, the number of migrants returning to their native states is less with no stringent rules for inter-state travel. Also, the availability of trains and private buses make it relatively easier for migrants to return home.

On April 11, COVID cases in Karnataka breached the 10,000 mark with 75% of those coming from state capital Bengaluru. Chief Minister B S Yedyurappa, on Monday, said a complete lockdown could be imposed in the state, if need arises. “People need to respond for their own good. If they don’t heed then we may have to take stringent measures. If required, we will impose a lockdown,” Yediyurappa told reporters in Bidar on Monday (April 12).

Bechu Adivasi, a 23-year-old migrant worker employed in the construction industry, arrived at the city railway station 24 hours ahead of the schedule to catch a train to Varanasi. Bechu said that with the rising COVID cases, he feared there would be another lockdown and did not want to face a crisis situation like last year. While he returned to Bengaluru to work just a month ago, he says the situation today, unfortunately, is right for him to return. “We don’t know what will happen in the next few weeks. There are indications of yet another lockdown and we don’t want to get caught in it like last year,” Bechu said. While two of his friends came to Bengaluru in search of work last month, he says they too would return later this week.

With no government bus plying owing to workers’ strike, Bechu spent Rs 400 to reach the station in an autorickshaw. While most migrants are worried over surging COVID cases, for some it was the festival spirit that forced them to leave. Though several states imposed restrictions on public gathering ahead of the festival, this did not deter them from travelling.

With Ugadi, Bihu, Bishaki, Ram Navami and Gudi Padwa slated in the next 10 days, migrant workers within Karnataka and those from outside the state are keen to return to their native places to be with their families.

Sukdev Yadav, 29, a Jharkhand-bound passenger working as a carpenter in the city, waited at the station along with four others, to return to his hometown. “When the migrant crisis happened last year, we had stayed back unlike many. As it’s been more than 18 months since we arrived and Ram Navami is slated on April 21, we are returning home to celebrate,” Yadav said. 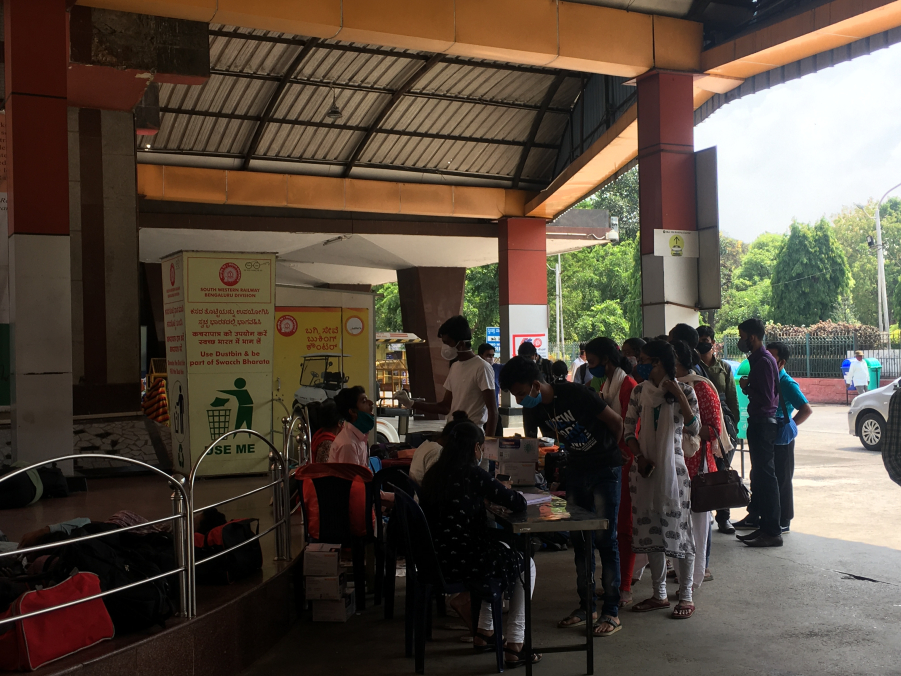 With the crowd swelling by the hour at the railway station in the absence of public buses, the health department conducted random tests on both incoming and outgoing passengers.

Suresh, a BBMP health worker, said there were 10 teams taking an average of 150 samples each at the railway station every day.

During the last migrant workers’ exodus, the Karnataka government submitted to the Karnataka High Court that nearly 4.16 lakh people were taken back home between March and June last year. However, industry experts projected the numbers to be double the government estimate.

C R Janardhana, president of the Federation of Karnataka Chambers of Commerce & Industry (FKCCI), said after the last migrant exodus, only 40% of the people returned. As a result, the state’s micro, small and medium enterprises have suffered a serious setback. Though Janardhana was confident the crisis won’t repeat itself, he said another lockdown will kill the already ailing MSMEs.

“When the CM talks of a lockdown, he may only be cautioning so that people follow the social distancing norms seriously and mask up. We cannot afford another lockdown as it would bring the MSMEs on the brink of a collapse,” Janardhana said.

Why Kerala has been overwhelmed by COVID 2.0