JC Prabhakar Reddy, the strongman from Andhra, is back in news, though for a cause. His name is associated with bloody factional politics, bombs, guns, clashes with officials, dharnas against authorities, illegal transports operations, etc. This time, in his second stint as the municipal chairman, the ‘Don of Rayalaseema politics’ has come out with a unique scheme ‘Green Tadipatri’.

In his first stint as the municipal chairman a decade ago, the town, with many firsts to its credit, won laurels as an ideal municipality in terms of administration and civic life. Between then and now, a lot of water has flowed down the river Penna which flows by the town with many “unpleasant changes” taking place. His political career suffered setbacks following the arrival of YS Jagan on the scene.

Prabhakar Reddy was elected chairman in March 2021. Now 67, while age-related frailties have affected his ferocity to some extent, his spirit wants to regain the ground as Chief Minister Jaganmohan Reddy is hell-bent on finishing JC Brothers’ hold on local politics.

The ‘Green Tadipatri, is Reddy’s attempt to win over public support. The objective of the scheme is ‘plant and educate’.

Also read: Industry in Andhra smarts under ‘vendetta politics’ as many units shift

“I am launching a green group. Anybody from age 5 to 50 can join and reap the benefits of this green movement. This is a community movement,” said Prabhakar Reddy. The resistance from the ruling YSRC and local MLA would not stop this work, he declared.

“I want every student from class 1 to Degree College to enroll as a member. All, one needs to do is plant a sapling and nurture it. We will take care of your education. If a student is weak in a subject, we will organize special coaching with the help of experienced teachers, free of cost. For girls and women, we want to train them in some vocations like cookery and beautician course, bakery, etc. We will supply plants. Water them regularly. No great effort is needed. Just wash your face near a plant and it would grow,” Reddy told The Federal. 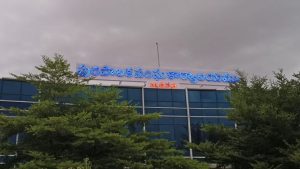 A campaign is being run on the model of KCR’s Harita Haram in Tadipatri town with same songs replacing the word Telangana with Tadipatri. A Nano car converted into a campaign vehicle will crisscross the town carrying the message. “I am buying 20 electric scooters for my councilors from my own pocket. They will go round the city to keep a watch on the health of the saplings,” he said.

You will see a new Tadipatri, Green Tadipatri soon, he declared. “I am facing a threat to my life. I am at a stage in life where death doesn’t matter much. I have made the town stand out in entire India. I will take this to the highest level,” he said.

JC Brothers were once synonymous with politics of terror. They have the uncanny ability to gain acceptability among the people of Tadipatri constituency, a mineral-rich oasis in the backward Rayalaseema region of Andhra Pradesh.

The people unequivocally disapprove of JCB’s oppressive control over the constituency. Their alleged criminal record was all-encompassing. They controlled the most lucrative business — transport, liquor, and politics. The people fear to talk ill about them even in private. Opposition was unheard of till 2019. Their warlord-like grip created an environment where people generally were convinced that it’s better to vote for them than falling prey to severe backlash after the elections.

The situation changed drastically after the fall of the TDP and the emergence of YS Jaganmohan Reddy in 2019. The JCB empire is on the verge of collapse. JC Brothers (JC Diwakar Reddy and JC Prabhakar Reddy) lost the elections. Their enormous money and muscle power paled into insignificance in the face of Jagan’s equally frightening strategies. Post-2019 the politics took a predictable turn.

Their flagship trade Divakar Travels is closed, cases were booked for illegal operations. JC Prabhakar Reddy, the younger one and the most fearsome, was arrested and lodged in Kadapa sub-jail, an unthinkable turn of politics in Rayalaseema.

Jagan’s Pulivendula and JCB’s Tadipatri are neibhouring Assembly segments and also the reason for the arch rivalry between the two families.

Now many consider it is one of the declining political dynasties of the region. But, JC Prabhakar Reddy captured the municipality in March 2021 elections. In the elections held for 12 corporations and 75 municipalities, Tadipatri was the only one where Jagan’s juggernaut stopped.

Prabhakar Reddy, humiliated following sub-jail life and COVID infection, won the elections, despite the deployment of state machinery, the backing of equally aggressive local MLA, and money power by the ruling party. Jagan could not win the most prestigious of all municipalities.

How is it possible? Therein lies the catch.

Vaddi Muni, a weaver from the town, says one needs leaders like Prabhakar Reddy to discipline the unruly public and red-tape in the municipality. “The town has clean roads. It has no water problem. Overflowing drains is a matter of the past. Public urination is no longer seen and people don’t use plastic,” says Muni attributing all this to Prabhakar Reddy’s ruthless style.

Talk to anybody on the streets of the historical town, famous for its temples of Vijayanagara architectural grandeur, you would elicit a similar response of fear and approval.

Take the case of B Parameswar Reddy, a teacher who frets the lack of civic sense among the people. “Only these don-like leaders can make a difference. If Prabhakar Reddy wants something to be done for the town, it’s done, there is no option. Otherwise, you will face frightening consequences,” says Parameswar Reddy said while talking to The Federal.

Even after becoming MLA in 2014, Prabhakar Reddy oversaw the development of the town. JCB left Congress like many after the bifurcation of the state to join the TDP.

Prabhakar Reddy enforced the civic discipline with iron-fist. Every citizen is made to follow the unwritten code of environmental obligation to make the town clean and green. Any damage to the plant other than natural would attract a fine of up to ₹ 10,000.

How it worked wonders

Every day at the crack of dawn, Reddy would go round the town in his Land Rover that would come to a halt at a place where garbage was spotted on the road. He would then step out of the SUV and collect the garbage, plastic teacups into a bin as citizens would watch in awe. That itself worked like a warning.

“It is difficult to disobey Prabhakar Reddy. Overnight garbage disappeared from the streets. People stopped using plastic,” said a shopkeeper.

“I want to make this town the most livable place in Andhra Pradesh, for that matter in India. An element of force is there, but it is required given our indifference towards the environment,” said Prabhakar Reddy with a smile.

Prabhakar Reddy was unchallenged. Now, he has rivals, one in the form of local MLA, two, Jagan as CM at the top. Wait and watch the drama that is set to unfold in Tadipatri.