Rangoli (patterns created on the ground using dry flour) as an instrument of political messaging is fast catching up.

After protestors in Tamil Nadu hogged the national limelight used ‘Kolam’ designs to convey the anti-CAA and anti-NRC slogans, it is now the turn of Andhra Pradesh farmers to employ the same medium to voice their protest against the move to shift the state capital from Amaravati.

Taking a cue from Tamil Nadu protestors, the farmers in and around Amaravati region in Guntur district came up with novel Rangoli designs to convey their message as their protest entered 15th day on Wednesday (January 1).

“Save Amaravati, Save Andhra Pradesh” read one of the messages in the form of Rangoli. “Let us save Amaravati, our dream capital,” says another. 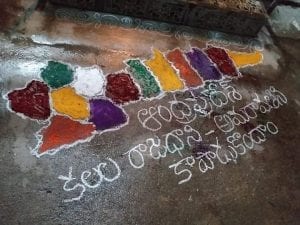 On the eve of the New Year, the protestors drew Rangolis (Muggulu in Telugu) in front of their homes and on the streets in villages of the capital region seeking restoration of Amaravati as the sole capital of the state.

Joining the protests, the former Chief Minister and Telugu Desam Party president N Chandrababu Naidu, accompanied by his wife N Bhuvaneshwari, visited a few villages in Guntur district where farmers are staging dharnas in support of their demands.

At Errabalem village, the Naidu couple sat in a dharna, expressing solidarity with the farmers. Bhuvaneshwari took out her gold bangle and donated it to the farmers’ cause.

“Let the bangle be auctioned and the proceeds can be utilised for the cause of farmers,” Chandrababu Naidu suggested.

Similarly, donations have been pouring in from people across the region. The former Chief Minister, who had envisioned Amaravati as an ultramodern capital city, appealed to his party leaders and cadre to donate money to the cause of the protesting farmers and agricultural workers.

Meanwhile, Naidu has decided to forsake New Year celebrations and instead stand by the agitating farmers of Amaravati.

The protesting farmers have written to the President Ram Nath Kovind, seeking his permission for ‘mercy killing’ as the Jagan Mohan Reddy government was pursuing “a policy of revenge” against the people of the region by deciding to shift the state capital.

They sought the President’s intervention to stall the process of shifting the capital. 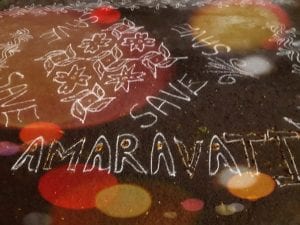 “We intend to die because all doors for solution have been closed and the government of Andhra Pradesh is pursuing revenge against the people of Amaravati. We cannot withstand the onslaught of the government through police force. We opine that death is an ultimate form of protest against the governments that do not guarantee constitutional rights,” the farmers said in their representation.

They recalled that farmers of the region voluntarily gave up their fertile agricultural lands, to an extent of over 33,000 acres, for building the state capital after the bifurcation of Andhra Pradesh in 2014.

Finalisation of the capital was done after all parties unanimously passed a resolution in the Assembly in favour of Amaravati, they recalled.

During the 2019 election campaign, Jagan Mohan Reddy had promised that Amaravati would be continued as the capital, but once he came to power, he backtracked, they alleged.

“It is in this backdrop that we, with our families, have come on to the streets and are protesting for the past two weeks against the shifting of Amaravati. Nobody from the government is paying an ear to our woes,” the farmers said.

The leaders of the ruling YSRCP, including ministers and legislators, have been mocking them and communalising the issue in the name of caste and religion, the farmers alleged. 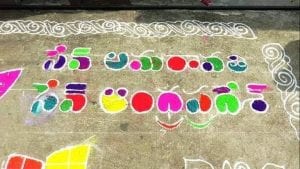 “We are raising this supposedly strange demand (for mercy killing) only to highlight our plight and request your Excellency to grant us the permission,” the farmers said.

On December 27, the Andhra Pradesh cabinet had deferred taking a decision on relocating the capital, saying that it wanted to wait for the report of an international consulting firm Boston Consulting Group (BCG), which is expected to submit the report on January 3.

The Chief Minister himself had indicated on the floor of the Assembly on December 17 that Andhra Pradesh could have decentralised capitals.

The existing capital Amaravati could become the ‘Legislative Capital’, port city Visakhapatnam the “Executive Capital” and Kurnool the “Judiciary Capital”.