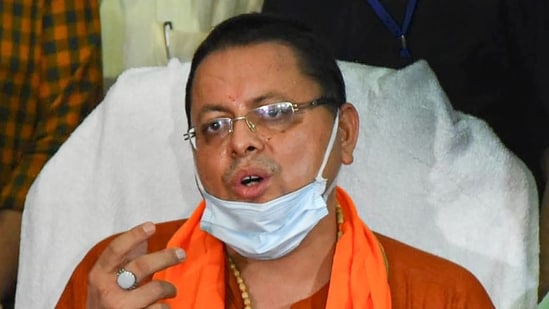 Uttarakhand’s new chief minister Pushkar Singh Dhami’s old post on a map of the RSS dream concept of “Akhand Bharat” (undivided India) came back to haunt him and landed him in a lot of controversy, Pic: PTI

Uttarakhand’s new chief minister Pushkar Singh Dhami’s old post on a map of the RSS dream concept of “Akhand Bharat” (undivided India) came back to haunt him and landed him in a lot of controversy, even before he could take his oath on Sunday (July 4).

In 2015, on August 14, a day before Independence Day, the BJP leader Dhami had posted a map of India that defied any resemblance to current borders that India shares with its neighbours. His tweet at that time reportedly went unnoticed but it has suddenly surfaced with his sudden elevation to the post of CM of Uttarakhand, said a Hindustan Times report.

Twitters users have jumped in and having a field day as they pointed out that the map was wrong on several fronts since it includes neighbouring countries like Aghanistan, Bhutan, Burma, Nepal, Bangladesh and Pakistan but leaves out PoK and Ladakh.

The saffron coloured map with an image of a Bharat Mata beside a lion at the centre is captioned Akhand Bharat – the dream of every Rashtrabhakt.

A former IAS officer, who had been the CEO of Prasar Bharati Jawhar Sircar, shared the six-year-old screenshot and wrote with heavy sarcasm: Shouldn’t the BJP be making this man foreign minister of India rather than the CM of a tiny state like Uttarakhand? Then we can all move to 3rd World War.”

This is all the more embarrassing since two police cases have been filed against Twitter for carrying the distorted version on its website. Last year, Twitter had depicted Leh as part of China. Moreover, earlier this year, the government had raised an objection with the WHO over the “wrong depiction” of India’s map on its website and they had to put a disclaimer.

Another Twitter user said: “Surprisingly, he has given the wrong version of the Indian map—sans PoK and Aksai Chin…where is his Rashtravaad? Sold to foreign masters?” Some social media users however jumped to defend this version of India’s map by Dhami claiming that Akhand Bharat is more of a cultural concept than a territorial one.

The history of the RSS and BJP elusive dream concept: Akhand Bharat

BJP leader Dhami was being a true pracharak when he had posted this map in 2015. The dream or idea of Akhand Bharat has been strongly propagated by the RSS from 1947 itself.

At a press conference in Delhi on August 24, 1949, after the government had lifted the ban on the RSS — imposed on it for its role in Gandhi’s assassination — M S Golwalkar, the organisation’s second sarsanghchalak said that as far as possible, the country must continue their efforts to unite these two divided states…(India and Pakistan). Nobody is happy with Partition, he said, according to an Indian Express report.

A point of view he repeated at another press conference held in Kolkata on September 7, 1949. RSS’s idea of “Akhand Bharat” includes not only Pakistan and Bangladesh, but also Afghanistan, Myanmar, Sri Lanka and Tibet and the RSS reportedly has coined the combined region as a “Rashtra” that is based on “Hindu cultural” similarities.

In 1965, Jansangh passed a resolution that “Akhand Bharat will be a reality, unifying India and Pakistan.” Over time, RSS and BJP leaders have often spoken about this. In 2012, before assuming office, Prime Minister Narendra Modi however clarified his party’s thinking, that Akhand Bharat “does not mean we wage war on any country … without war, through popular consent, it can happen … We call this Sanskritik Bharat (Cultural Bharat),” pointed out media reports.

In 2015, the same year, Dhami tweeted this photograph of the Akhand Bharat map, an RSS pracharak, former BJP general secretary Ram Madhav stirred up a controversy, even as PM Modi was making a grand surprise visit to Pakistan. Madhav told the Al Jazeera channel at that time that he still believed that one day these parts, (Pakistan and Bangladesh) which have for historical reasons separated only 60 years ago, will again, through popular goodwill, come together and Akhand Bharat will be created.

The author of a book called “Dream of every patriot: Akhand Bharat”, written by one Dr Sadanand Damodar Sapre, said that the idea of Akhand Bharat can be made “possible through our manliness (purusharth)”.

RSS literature — books and songs — is full of references to “Akhand Bharat”. But all publications insist Akhand Bharat is a “cultural” entity, not a national or political one”.

The late HV Sheshadri, who was sarkaryawah for many years, pushing the possibility of re-unification wrote in his book, “The Tragic Story of Partition” : “Gradually, the truth would one day dawn upon them (Pakistan and Bangladesh) that they have not, after all, benefited from Partition, and that their physical and mental happiness could result only from their union with Bharat and its cultural heritage.”

Akhand Bharat, in its most expansive version, is envisioned to include territories that constituted the third century BC empire of Chandragupta Maurya. This would incorporate the modern day nations of Afghanistan, Pakistan, India, Nepal, Burma, Tibet, Bhutan and Bangladesh.

Today, both BJP and RSS have ostensibly abandoned the goal altogether. Akhand Bharat finds no mention in the mission statements of either group, said Bhanu Dhamija in an edit in the Times of India.

He added that that Modi had provided a clue as to why this was so in a 2012 interview. PM Modi had said at that time time that it will only be good for Pakistan when they become a part of united India … if Pakistan, Bangladesh, Afghanistan and Hindustan become one, then the Muslim majority will increase and it will be easier for Hindustan to become an Islamic country.

So, this grand idea of Akhand Bharat ostensibly seems to have been laid to rest for now. But, unfortunately for Dhami, digital media leaves a trail difficult to erase.