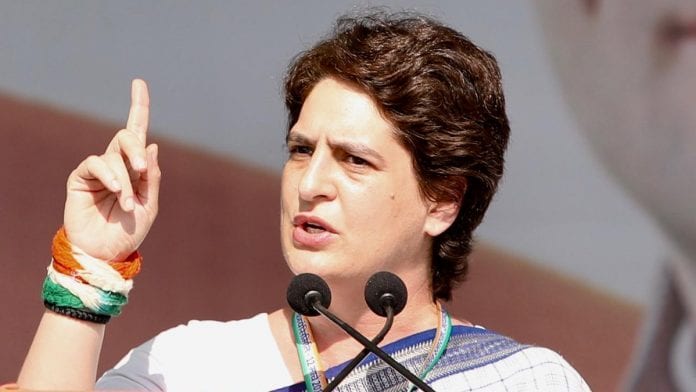 Desperate to end the Congress’s three-decade-long exile from power in Uttar Pradesh, Priyanka Gandhi Vadra, on Saturday, unveiled her party’s ‘saat pratigya’ (seven pledges) to the state’s electorate, on Saturday. In what could be dubbed as the formal launch of her party’s campaign for the assembly polls due in UP early next year, Vadra announced at a rally in Barabanki that the Congress, if voted to power in the state, will waive farm loans and give farmers a minimum support price (MSP) of ₹2500 per quintal for paddy and wheat and ₹400 per quintal for sugarcane.

Vadra, who will lead the Congress poll campaign in UP, also declared that her party will reduce electricity bills by half, give 20 lakh government jobs and provide ₹25000 in financial support to every poor household affected by the COVID pandemic if it forms the next state government. Consistent with poll rhetoric and election rallies, there was, of course, no explanation given on how the Congress plans to identify intended beneficiaries for its loan waiver and financial support promises or where it would find the funds for fulfilling the other pledges.

Congress sources told The Federal that Vadra’s pledges were made after senior leaders who are part of the party’s election manifesto committee held discussions with economists and subject experts on the practical and fiscal feasibility of these promises. The party’s senior observer for the UP polls, Chhattisgarh CM Bhupesh Baghel, say sources, also gave his inputs as his government had been the first to hike the MSP of paddy to ₹2500/quintal earlier this year and claims to have already procured over 80 lakh metric tonnes at this rate this year.

Earlier this week, Vadra had announced the first of her party’s seven pledges at a press conference in Lucknow when she declared that the Congress will ensure that 40 percent of its candidates (about 160 in the 403-member UP Assembly) are women. The Nehru-Gandhi scion had also declared that girls studying in Class 12 will be provided smartphones while those pursuing graduation will be given e-scooties by the state government if the Congress is voted to power.

On Saturday, in a brief speech that was stacked with lofty assurances to the electorate, Vadra also said that the Congress will, in a week’s time, come out with a manifesto dedicated to the state’s women. Vadra, say Congress sources, is keen on targeting women voters of the state considering that this segment has been aggressively wooed by the BJP in recent years through a litany of social welfare and financial assistance schemes.

The Congress general-secretary also flagged off the first leg of the Congress’ 12000-km long ‘Pratigya Yatra’ during which party leaders plan to cover over 300 of the state’s 403 assembly segments in a bid to highlight their poll promises before the electorate. While Priyanka flagged off the Barabanki-Bundelkhand stretch of the yatra, two others – Saharanpur to Mathura (western UP) and Varanasi to Rae Bareli (eastern UP to the Awadh region) – were also simultaneously launched. These yatras will proceed simultaneously till November 1, with party veterans such as Salman Khurshid, Pramod Tiwari, PL Punia, Ajay Rai, Pradeep Jain Aditya and Acharya Pramod Krishnam addressing multiple rallies, corner meetings and press conferences. A fourth route, covering much of the Purvanchal (eastern UP) districts, is also likely to be launched in the next few days. Party sources say discussions on at least two more routes are being held among the party’s internal committees on election campaign, planning and strategy. Sources say Vadra is also likely to address several rallies during these multi-pronged yatras.

With Vadra leading the charge against the ruling BJP and chief minister Yogi Adityanath, the Congress is hoping that its days of being a fringe political outfit with swiftly eroding grassroots and legislative presence in the state, may finally come to an end when UP votes in February-March 2022. Vadra recent rallies – in Varanasi and now Barabanki – have been attracting huge crowds. She has been quick to respond to emerging political issues and developments in the state – her combative dash to Lakhimpur Kheri to stand in solidarity with kin of farmers who were run over by the cavalcade of Union minister Ajay Mishra’s son Ashish Mishra and her meeting with the family of a sanitation worker who died under police custody in Agra – while leaders of other, stronger Opposition parties with a formidable vote bank, such as BSP’s Mayawati and SP’s Akhilesh Yadav have been caught napping.

Vadra’s feisty campaign for the Congress, high-decibel attacks against the Adityanath government and populist poll promises do give the impression of the Grand Old Party getting its act together after a long hiatus. What remains to be seen, though, is whether all this – and whatever else is to come as elections draw closer – is enough to reverse the Congress’ dwindling electoral fortunes in the state long hailed as the key to forming a government at the Centre.