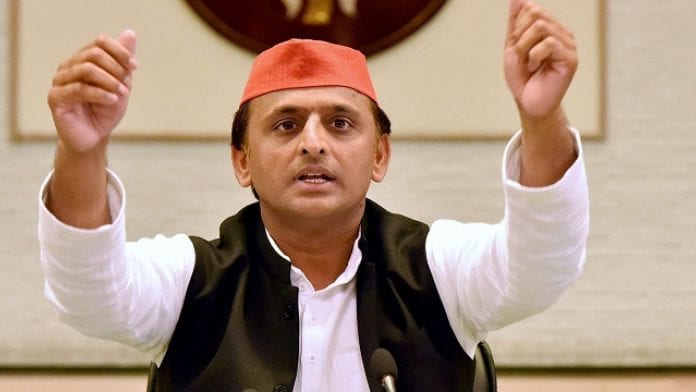 Samajwadi Party (SP) president Akilesh Yadav seems to be on an alliance-stitching spree. After forming an alliance with Rasthriya Lok Dal (RLD) and Suheldev Bhartiya Samaj Party (SBSP), Yadav signed a truce with his estranged uncle Shivpal Singh Yadav on Wednesday, ahead of the 2022 Uttar Pradesh Assembly elections.

Akhilesh said that he had no problems in allying with Shivpal’s Pragatisheel Samajwadi Party (PSP) in the forthcoming Assembly polls.

”We will have an electoral alliance with PSP…Shivpalji will be given due respect,” Akhilesh told reporters at Saifai, his native village in Uttar Pradesh’s Etawah district, about 300 km from Lucknow.

Akhilesh said that the seat-sharing talks would be held with the PSP at the appropriate time.

The SP president, who has ruled out an alliance with the Congress and the BSP, said that the people of the state were “fed up with the BJP government” and had decided “to oust the saffron party” in the upcoming polls.

Shivpal, who was one of the founders of the SP, had played an important role in strengthening the party at the grass-roots level.

Although Shivpal’s party could not win any seat in the state in the 2019 Lok Sabha polls, it certainly affected SP’s prospects on at least four to six seats.

Shivpal, who had contested against his nephew Akshay Yadav, from the Ferozabad seat, ensured the defeat of the Akshay, by bagging around one lakh votes. Akshay’s margin of defeat was less than one lakh. Similarly, he also played spoilsport at Kannauj, Etawah and some other seats.

SBSP president Om Prakash Rajbhar said on Thursday that his alliance with the SP would support jailed BSP MLA Mukhtar Ansari in the upcoming polls.

Rajbhar, who forged a tie-up recently with the SP for the Uttar Pradesh Assembly polls, had met Ansari in Banda jail, prompting the ruling BJP to accuse him of practising the “politics of appeasement”.

“I have met Mukhtar in Banda jail two days ago. During the meeting, his son Abbas Ansari was also present. The SP and the SBSP alliance will support him in the Assembly polls,” Rajbhar told PTI.

“It depends on Mukhtar whether he contests in alliance with the SP and the SBSP or as an independent candidate,” Rajbhar added.

When asked whether Yadav would be ready to support him, Rajbhar said, “If he has to form a government, he should not have any problem in giving support. When he can forge an alliance with Mayawati, then there will be no problem in supporting Mukhtar.”

Rajbhar had earlier termed Mukhtar as an “old friend”. He used to go to meet him in Punjab jail, even as a minister in the Uttar Pradesh’s BJP government.

“It was not just a meeting between Rajbhar and mafia Mukhtar Ansari but an evidence of the politics of appeasement that the BJP often talks about,” Uttar Pradesh government spokesperson and cabinet minister Siddharth Nath Singh said on Wednesday in a statement.

The SBSP had held a rally in Mau on October 27, with Akhilesh too taking part in it and announcing a poll alliance with Rajbhar’s party, which is said to have a considerable influence over his community voters in eastern Uttar Pradesh.

The SBSP, which had contested the 2017 Assembly elections in alliance with the BJP, has four MLAs in the UP Assembly currently. Rajbhar was also made a cabinet minister in the Adityanath government, but due to differences with the chief minister, he quit the government.

In September this year, BSP supremo Mayawati had said that her party would make efforts to not field ‘bahubali’ (strongmen) or mafia candidates in the 2022 Uttar Pradesh polls, and had announced that jailed gangster-turned-politician Mukhtar Ansari will not be given a party ticket from Mau again.