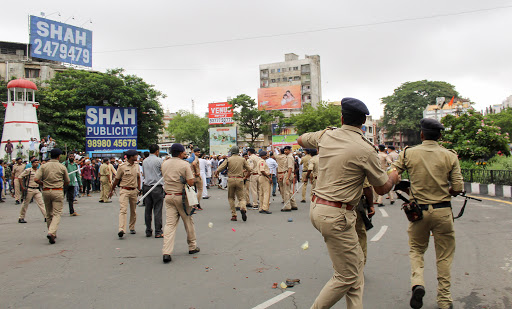 After a video of a police team indulging in self-glorification by brandishing automatic weapons went viral on social media, the state’s top cop on Saturday (July 27) transferred them to police lines and ordered an inquiry into the matter.

The video was shot after six members of the Uttar Pradesh Police’s SWAT team led by Vikram Singh nabbed a rape accused, Asgar following a brief gunfight, four days ago. In the short clip, the police team sporting dark glasses can be seen flaunting their automatic firearms and walking in slow motion while a Punjabi song plays in the background.

A series of #Encounters are taking place in #UttarPradesh. Every Police Officer in UP wanted to become either an encounter specialist or exhibit. Look at this video from Basti District with a background #Punjabi #Song pic.twitter.com/i3qdzkSzqR

It was posted on Facebook by a friend of one of the team members and had gone viral, prompting the authorities to take action. “Regarding a viral video of SWAT team of Basti Police, DGP UP OP Singh has directed SP Basti to transfer entire SWAT team to police lines and get the matter enquired by CO city,” the state police tweeted.

“We do not sanction unprofessional display of weapons and grotesque caricaturing of Police,” the tweet said.

According to Superintendent of Police Pankaj Kumar, Circle Officer Sadar, Alok Singh has been asked to conduct an inquiry into the entire episode.