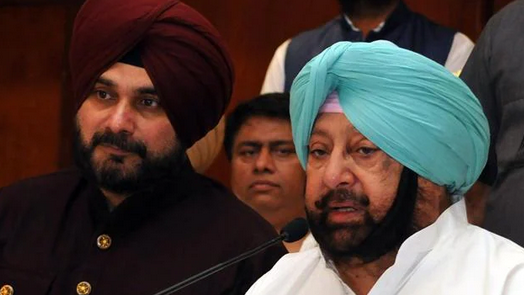 Sidhu didn’t tone down his salvos against Singh despite his recent meeting with Congress leaders Rahul Gandhi and Priyanka Gandhi.

The Congress party in Punjab that seemed well-placed to win another term in the state elections due next year is in a self-destruct mode.

An open fight between Chief Minister Captain Amarinder Singh and disgruntled MLA Navjot Singh Sidhu has brought the party to a perilous state which could seriously harm its prospects in the polls. It all started when Punjab Chief Minister appointed the sons of two party MLAs to the post of inspector in Punjab Police and Naib Tehsilar in the Revenue Department on “compassionate” grounds.

The Opposition was quick to cry foul over the gesture of ‘nepotism’, but there were stinging voices of criticism from the Congress’ own camp too — MLAs Amrinder Singh Raja Warring and Kuljit Singh Nagra, both close to Rahul Gandhi; and Youth Congress chief Barinder Dhillon.

Punjab Pradesh Congress Committee Chief Sunil Jakhar, who is close to Amarinder Singh, urged him to rescind the appointments as it could affect the party’s prospects in the 2022 Assembly elections.

Unfazed by the brickbats, Amarinder Singh refused to budge, and in his defence, said the job given to the two youths, was a tribute to the sacrifices made by their forefathers for the country. He also assured that he would give jobs to others who belong to families which have made similar sacrifices.

The Shiromani Akali Dal (SAD) accused Amarinder Singh of doling out jobs to kin of Congress legislators to prevent infighting within the party and keep his position safe.

Enter Sidhu and his salvos

Cricketer-turned-politician from the party, Navjot Singh Sidhu, stirred the pot further with a slew of accusations against the chief minister. Making a veiled attack at Amarinder Singh and Opposition leader Sukhbir Singh Badal, Sidhu in an interview with Hindustan Times, alleged that the government in Punjab was run by two powerful families, who in turn, have allegedly compromised the state’s development for their vested interests.

“These two people have looted the state. They have made the state debt-ridden, finished it. They have gone against their promises. I am raising people’s voices,” he said.

Sidhu successfully rallied support against Singh in the party, when he called his government “weak” over the quashing of the probe reports submitted by a special investigation team of the state government into the police firing case at Kotkapura town in 2015. Two people were killed when police, under the Akali-BJP regime, fired at protesters agitating against the desecration of the Guru Granth Sahib, the Holy book of the Sikhs, at Behbal Kalan and Kotkapura on October 14, 2015. The Congress had promised to bring all perpetrators to justice, including Akali leaders involved in the ‘sacrilege’ incident when it came to power in 2017.

Sidhu didn’t tone down his salvos against Singh despite his recent meeting with Congress leaders Rahul Gandhi and Priyanka Gandhi.

In a string of tweets, he tore into the Amarinder Singh government over the power crisis in the state which has triggered incessant power cuts. Ironically, reports later stated that Sidhu himself has an outstanding electricity bill of ₹8,74,784 for his Amritsar residence. A senior Punjab State Power Corporation Limited officer said the department had not taken against action against the Congress MLA due to his political clout.

Incidentally, Sidhu was allotted the power portfolio in 2019 after being stripped of his local government portfolio over the poor performance of the party in urban constituencies, but he refused to accept it as he felt it would be a demotion.

What triggered the bitterness?

The feud escalated even when the Congress leadership was trying to address infighting within the party, and particularly iron out differences between Sidhu and Captain, which have persisted since 2019.

In 2019 Harish Rawat, the party’s in-charge of Punjab affairs, tried to strike a truce between the two, but Sidhu demanded to be promoted as the deputy chief minister, a proposal Captain rejected. Rawat said that a decision regarding Sidhu’s future in the party would be announced soon while Congress president Sonia Gandhi will take a call on the roadmap for the changes in the cabinet and organisational structure by the first week of July.

Political analysts say Sidhu’s feud with Captain may have gone out of hand this time with no reconciliation in sight.

“Sidhu must have got enough indication that the Captain has prevailed over the party’s central leadership in keeping him away from the post of Punjab Congress chief, a post Sidhu was desperately eyeing for in order to replace Captain,” senior journalist Hamir Singh told The Wire.

Even though the Congress leadership seems keen to retain both Captain and Sidhu, the latter may be planning to jump ship, most likely to the Arvind Kejriwal’s Aam Aadmi Party (AAP).

The speculation was fuelled by Kejriwal’s recent announcement that the party will field a Sikh candidate as chief minister for the Punjab Assembly polls. Captain, on the other hand, reports suggest, has dug in his heels and is refusing to give any concessions to Sidhu.

Meanwhile, The Sunday Guardian reported that “it is time the Congress leadership understood that the Amarinder Singh government’s inability to fulfil its poll promises and the perception of being ‘soft’ towards its opponents (courtesy the sacrilege case) and even having a ‘secret understanding’ with them may cost the Congress dearly in the Assembly polls.

Even though the BJP is facing a near social boycott over its farm laws in the state, the report says the infighting within the Congress may give Akalis an opportunity to revive themselves as they have struck an alliance with Bahujan Samaj Party or BSP. In turn, this may benefit the Aam Aadmi Party to emerge as a dark horse.

Chandigarh-based political commentator Harjeshwar Pal Singh told The Wire that despite riding strong on its win in the municipal polls in February, the Congress has undoubtedly seen a dip in its popularity due to factionalism and Amarinder Singh’s “blunder” of favouring party men while doling out jobs.

“At a time when the party should be defending its four-and-half-year track record, it is facing an internal turmoil, unconcerned about its image or interest,” Singh said.

“If the situation continued to prevail within the Congress, it would only end up strengthening the rivals,” he said.