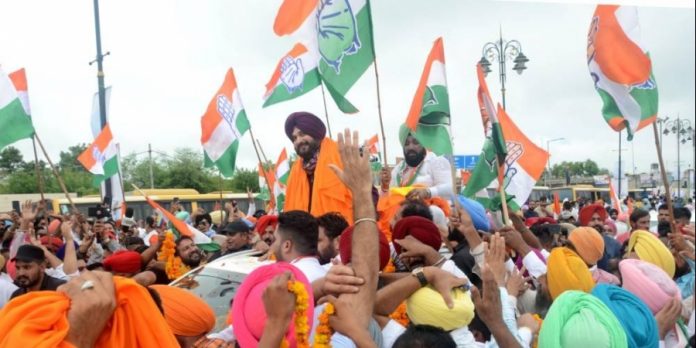 Navjot Singh Sidhu, the newly appointed Punjab Congress chief, being welcomed by his supporters in Amritsar on July 21. PTI Photo

The rift in Punjab Congress has widened as Navjot Singh Sidhu, the newly appointed state party chief, has refused to publicly apologise to Captain Amarinder Singh and instead insisted on such an apology from the chief minister for not fulfilling the poll promises.

After Sidhu’s promotion in the party in the face of stiff resistance from the CM, the captain – a scion of the erstwhile Patiala princely state – demanded Sidhu’s regret for his harsh words as a pre-condition for a face-to-face meeting.

On Wednesday (July 21) Sidhu managed to put together a group of 62 of the 77 party MLAs inside the Golden Temple in Amritsar in a show of strength.

Amarinder’s media advisor Raveen Thukral had on Tuesday (July 20) reiterated that the CM would not meet Sidhu until he apologised for his “derogatory” statements against him. “Reports of sherryontop (Sidhu) seeking time to meet capt_amarinder are totally false. No time has been sought whatsoever. No change in stance… CM won’t meet Navjot Singh Sidhu till he publicly apologizes for his personally derogatory social media attacks against him,” tweeted Thukral.

Congress president Sonia Gandhi on Sunday appointed Sidhu as the new president of the party’s Punjab unit, notwithstanding the strong opposition from Amarinder Singh. Gandhi also appointed four working presidents to assist Sidhu in the run-up to the next assembly elections.

Also read: Punjab Congress at crossroads: Will Singh or Sidhu be the king?

“Why should Sidhu apologise to the CM? This is not a public issue. The CM should apologize to the public for not fulfilling his promises,” Sidhu’s closest aide and MLA Pargat Singh said. Minister Sukhjinder Singh Randhawa and Tripat Rajinder Singh Bajwa said the CM should leave his ego and asked why he cannot forget Sidhu’s words when he had patched up with his sworn rivals such as Partap Singh Bajwa and Sukhpal Khaira who had strongly criticized him earlier.

The state BJP – reduced to a non-player in the state after the Akali Dal parted ways with it last year – was euphoric. “Game on. Sidhu 62, Capt 15,’’ tweeted BJP national spokesman RP Singh.

Punjab Congress peace deal tenuous as Sidhu, CM yet to sit together