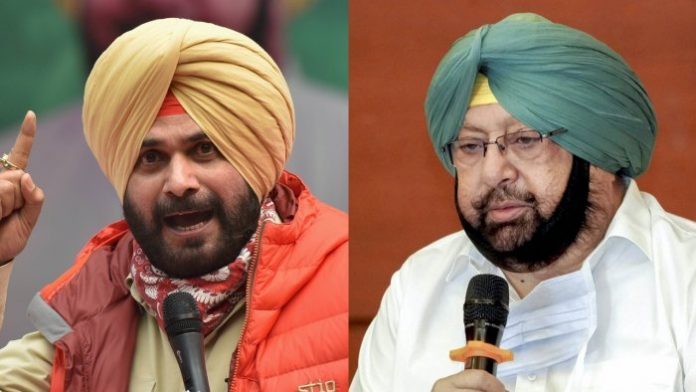 On Saturday noon (July 17), even as a jubilant Congress MLA Navjot Singh Sidhu started to tweet pictures of his meeting with “wise” past presidents of the Punjab Congress unit seeking their “guidance”, clearly signalling that he was to be christened the new state party chief, AICC general secretary Harish Rawat was flying down in a chopper to meet and placate Punjab Chief Minister, Amarinder Singh, in his farmhouse at Mohali.

The Congress party high command, however, was still playing safe and shying away from making an official announcement even on Saturday night, even as tensions were peaking in the Punjab Congress unit. Will the former-cricketer-turned politician be made the president of the “illustrious” Punjab Congress Committee, or won’t he? So far, only media reports quoting sources were saying so, but the Congress high command was silent on the matter.

After the meeting with Amarinder Singh, Rawat told reporters that the CM is sticking to his earlier stand that he will abide by Gandhi’s decision. But, just a day earlier, the veteran politician had dashed off an anguished letter to Sonia Gandhi objecting to his fractious party colleague Sidhu being made the Punjab Congress chief, since it would hurt the party’s prospects in the coming Punjab assembly elections.

His argument for opposing his bête noire Sidhu’s elevation to the party chief’s post has been that there will be no representation of other social groups in the party since both Sidhu and he belonged to the Jat Sikh community. And, that this may be opposed by stalwarts in the party, who would see this as slighting the “old guard”.

However, Sidhu, who has been staking a claim for an influential position either in the Punjab Congress or the government after he had resigned from Amarinder Singh’s government, went into a rebel mode (flirting with the Aam Aadmi Party) and managed to get a separate audience with the Gandhis.

He had bowled a googly and it worked. Media reports alleged that as a compromise and peace formula, Sidhu was to be given the post of the president of the Punjab Congress Committee. Though, the Punjab CM had said last week that he would accept “whatever decision is taken by the Congress high command”, and continues to parrot this statement, an NDTV report claimed that he was “not on board with the plan”.

Even as it was clear the veteran politician Singh would not want Sidhu foisted on him especially with an election around the corner, where both will be expected to work closely,  Congress spokesperson Javeer Shergil called both the long-standing foes as the party’s “gladiators”. And, went on to reiterate that Amarinder Singh is the captain of the Congress party in Punjab.

“Any change in the batting and bowling order will be only in consultation with him,” said Shergil, a Deccan Herald report stated. This was neither here nor there knowing the history behind the long-standing feud between Singh and Sidhu, which goes back to the 2017 state assembly elections.

The Feud – Singh vs Sidhu

Sidhu has been a vocal critic of Singh’s alleged lack of leadership. Their relationship which has been on a slippery ground since the time Sidhu defected from the BJP to the Congress in 2017, further nosedived after the single bench order of the Punjab and Haryana high court quashed a probe into the sacrilege case.

The desecration of a religious text and subsequent police firing had taken place in Faridkot in 2015, when the SAD-BJP government was in power. Two persons were killed in police firing at the anti-sacrilege protest at Behbal.

After the court verdict, which went against the ruling Congress government, Sidhu got the ammunition to highlight Singh’s weak leadership and for being lenient and inept at tackling corruption. He went on to attack him about the rampant sale of drugs in Punjab, the power crisis in the state, the sand mining and the ‘faulty’ liquor policy, which he alleged had caused hundreds of crores of losses to the state exchequer.

He also alleged that the government in Punjab was run by two powerful families, Singh and the Badals, who in turn, have allegedly compromised the state’s development for their vested interests.

Fed up with his attacks, Singh hit back at Sidhu calling his outbursts as “total indiscipline”.

A case of one-upmanship

Besides the fact that Singh belongs to the old guard (an old friend of Doon school pal, Rajiv Gandhi), while Sidhu had joined the Congress in 2017, both have distinctly different ideologies. While one is a nationalist, the other is a liberal.

Also read: Navjot Sidhu gets back at Punjab CM, this time over power crisis

Singh, who has an army background, wears his nationalist identity on his sleeves. While Sidhu, who has taken the liberal route in politics, even saw nothing wrong in warmly hugging General Qamar Javed Bajwa, when he visited Pakistan against the wishes of his CM, to attend his ‘friend’ Imran Khan’s swearing-in ceremony in 2018.

Sidhu, who was part of Singh’s cabinet at that time, did this despite the CM making his view about Bajwa public, especially after the Pulwama attack. He had challenged the Pakistani general, “that if you are a Punjabi, we too are Punjabis and you dare try to enter our territory and we will set you right.” So, Sidhu’s cosying up to the general and publicly must have rankled.

In 2019, Sidhu resigned from the Punjab cabinet after his portfolio was changed. He complained that he was being “singled out publicly”, and that he was also not supported in the cabinet. The CM then blamed Sidhu for “inept handling” of the Local Government department, saying it led to the Congress’s “poor performance” in the Lok Sabha polls.

After his resignation, Sidhu has been continuing to bat for a powerful position in the party.

A decisive stalwart vs a brash, popular leader

Captain Amarinder Singh has built a reputation in the state of being a decisive leader in the Punjab Congress. He had even forced his way in 2015 to the Punjab Congress president’s post due to his inimitable organisational skills, replacing Pratap Singh Bajwa, who had been handpicked by Rahul Gandhi just before the 2017 assembly polls.

Rahul Gandhi also brought Navjot Sidhu to the Congress much against the wishes of Captain Singh. Singh could not prevent his entry into the party but he effectively blocked his attempt to become the deputy chief minister of Punjab. And, since Singh had led the Congress to victory in the 2017 polls, Gandhi had to back down.

However, Sidhu with time, seems to have crafted his image in Punjab politics, as a popular leader with an honest image.

Will Sidhu’s elevation solve the infighting in Punjab Congress?

Political observers feel that Sidhu will only put more pressure on Singh, as he continues to hone his image as a crusader of Punjab rights. And, it is highly doubtful if senior Singh will take orders from an alleged upstart who joined the party barely four years ago.

The flashpoints may arise during elections, when there may be a squabble over ticket distributions, rallies and campaign planning among other subjects. Normally, the CM and party president work in harmony, but in this case, people feel it is unlikely they will work together since both seem to be constantly at crosshairs with each other.

However, a section believes that Sidhu is Congress’s best bet in the current scenario in the state considering that Singh is a “spent force”. Punjab politics just took an interesting turn, as a generational change is all set to probably unfold in the grand old party in this state as well.