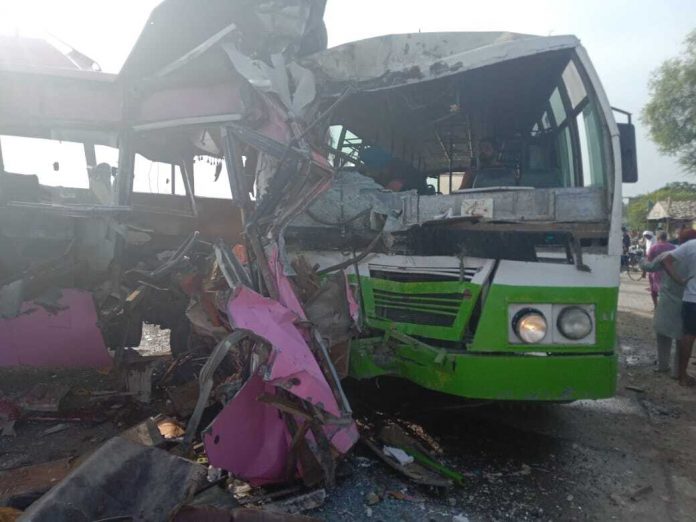 Three people were killed and more than 20 injured on Friday when a bus ferrying Congress workers to the installation ceremony of Navjot Singh Sidhu in Chandigarh met with an accident on Lohara road in Moga district.

According to the police statement, the mini-bus carrying the workers collided with a Punjab Roadways bus near Lohara road. The workers were going to Chandigarh from Zira to attend the installation ceremony of Navjot Singh Sidhu, who has been appointed the president of the state Congress unit.

The bus had 40 passengers, 10 of whom have been admitted at Moga Civil Hospital, while nine others have been referred to hospitals in Ludhiana, Amritsar and Patiala. Three others who were seriously injured were referred to Guru Gobind Singh Medical College and Hospital at Faridkot. The rest of the passengers, who suffered minor injuries, were discharged after receiving first aid.

The deceased have been identified as Gurdev Singh, resident of Ghuduwala village in Ferozepur, Virsa Singh and Vicky, from Malsihan village in Zira of Ferozepur.

Condoling the death of the workers, Punjab Chief Minister Captain Amarinder Singh tweeted, “Saddened to learn of the bus accident in Moga district in which 3 Congress workers have reportedly died & many persons are injured. Have directed DC Moga to immediately provide full medical treatment to all the injured and to send a report to the Government.”

“Preliminary investigation revealed that the driver of the minibus was driving the bus at a high speed,” the police said.

Congress president Sonia Gandhi had appointed Sidhu as the chief of the Punjab Pradesh Congress Committee on Sunday, amid opposition by Captain Amarinder Singh.

Singh finally gave in to the party’s decision, and he met Sidhu for the first time ahead of the inauguration ceremony on Friday, at Punjab Bhawan in Chandigarh, signalling an end to their longstanding stalemate.

Navjot Singh Sidhu will be taking over from incumbent state Congress chief Sunil Jakhar, and Singh is also expected to attend the event.