Jyotiraditya Scindia, who quit the Congress on Tuesday (March 10), joined the BJP at a formal function in New Delhi, in the presence of party president JP Nadda. Political grapevine has it that he is all set to be fielded for a Rajya Sabha seat from Madhya Pradesh after which he would be inducted into the Union cabinet.

Addressing a press conference at the BJP headquarters after being inducted into the party, Scindia hailed Prime Minister Narendra Modi’s leadership and said the country’s future is secure in his hands.

Talking about his decades-old association with the Congress, Scindia said he was hurt and distressed as he was not being able to serve the people in that party.

Attacking the Congress government in Madhya Pradesh, he said the dream which he along with his former colleagues saw for Madhya Pradesh has been shattered in 18 months. 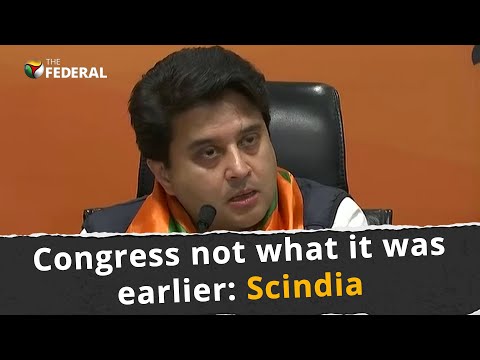 “I would like to thank BJP chief Nadda, Prime Minister Modi and Home Minister Amit Shah for inviting me into the BJP family,” he said, adding that they have given him a platform to serve the people.

After Scindia’s exit from the Congress, there was speculation about the timing of his formal entry into the BJP.

Sources say there were suggestions to hold the induction function at Bhopal, but the BJP decided to organise the function at its headquarters in New Delhi instead.

Prime Minister Narendra Modi and Union Home Minister Amit Shah, who had met Scindia before he announced his resignation on Tuesday, however, didn’t attend the function.

After Scindia’s resignation on Tuesday, 22 MLAs of the party also put in their papers, putting the Kamal Nath government in peril.

The BJP, meanwhile, is pushing for a floor test to claim power in Madhya Pradesh.