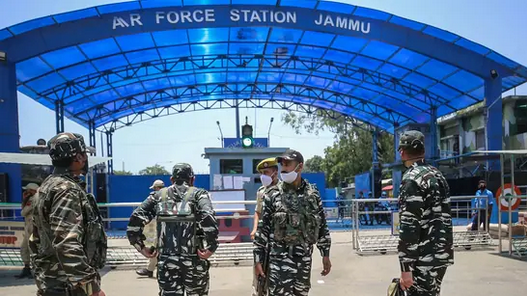 Security has been strengthened around vital installations in Kashmir in view of the likely threat by drone attacks, J&K Inspector General of Police Vijay Kumar said on Tuesday (June 29).

Two Air Force personnel were injured when suspected drones dropped two explosives in the high-security Air Force base in Jammu in the early hours on Sunday (June 27). The first explosion blew off the roof of a building, while the second exploded in an open area. The National Investigation Agency (NIA) is probing the matter after a case was filed under Unlawful Activities Prevention Act (UAPA).

Dilbag Singh, Director General of Police (DGP) for Jammu and Kashmir, termed the drone attacks as a ‘terrorist act.’ An investigating official told News18 that the Pakistani terror group Jaish-e-Mohammed (JeM) could be behind these attacks.

On June 27, hours after the drone strikes, a Special Police Officer (SPO) and his wife were shot dead by suspected JeM operatives in the Pulwama region.

Vijay Kumar had called a meeting with representatives of all security forces, including the Army, CRPF, BSF, Air Force and NSG on Sunday. “It is a very serious threat, a technological one which will be dealt with technologically,” he said.

Kumar said the police seized a drone on Monday morning in Jammu. An FIR has been lodged.

DGP Singh said that another major terrorist attack was averted after J&K Police recovered 5-6 kilos of Improvised Explosive Device (IED) from a truck, which was aimed at a crowded place. He said the Lashkar-e-Taiba (LeT) had executed the plan. The J&K police arrested LeT operative Nadeem Abrar in this connection.

A day after his arrest, Abrar and another Pakistani national was killed in an encounter in Parimpora area of Srinagar.