Kashmir’s well-known human rights defender Khurram Parvez Sheikh, who was recently arrested by security forces under the Unlawful Activities Prevention Act, is currently under the National Investigation Agency (NIA)’s custody in New Delhi. At Parvez’s Gupkar residence in Srinagar, Sameena, his wife, is receiving visitors, and giving her version to reporters and relatives about the raid on their house and the arrest of her husband on November 22.

The raid, according to the family, began at 7.45 am and continued till 1:30 pm. The NIA sleuths, who were 10-12 in numbers took Parvez to the agency’s camp office at Srinagar’s Church Lane, a walking distance from the activist’s residence.

Sheikh Shariyar, 42, Parvez’s younger brother, was notified about the formal arrest of his brother at 5:55 pm. That’s when Parvez’s wife Sameena, their 11-year-old son, Ahmed and old mother got to know about the situation.

During the search, the NIA personnel seized a Macbook, a Samsung mobile phone and some discarded SIM cards from Parvez’s bedroom. The NIA also seized books such as Architect of Global Jihad, Violent Gods, The Nuclear Jihadist, a book on Activism of former militants in Jammu and Kashmir; Hindu Nationalism, and Pahadou’n Ka Beta (The Son of the Mountains) from the activist’s study. 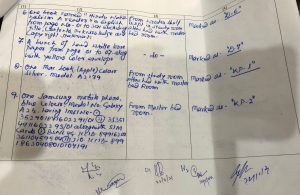 They confiscated two mobile phones but returned the two laptops of Sameena.

Sameena says the NIA personnel were “very cordial” and “even removed their shoes” while entering the rooms for searches. The conversation, according to her, was in relation to the couple’s work, personal and professional lives. “When they took Khurram along with them at 1:30 pm, they said he would be brought back home,” she told The Federal. Instead he was arrested in the evening.

“Khurram was, as usual, very calm, composed, and confident. He offered us strength and courage. He had a quiet word with Ahmed and told Ahmed to continue with his studies, tuition and football practice,” she said. 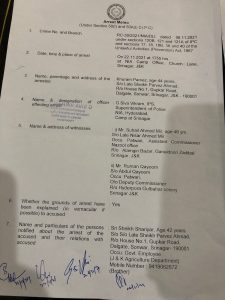 Psychological impact of arrest on children

Sameena understands the risks associated with human rights documentation in a region torn by decades of conflict.

“I do not think my husband has done anything abnormal. He is a very impartial and peace-loving person. Not by words, but by his actions. He has shown consistency in both his personal and professional aspects. And, above all, as a human being too,” she told The Federal.

The Sheikh family is worried about the effects of Parvez’s arrest on the psychology of his two children Ahmed and Arya (3).

“Both kids are very close to Khurram. The short-term impact is the absence of a father. He has been more like a friend to them than a father,” she said with a sense of pride.

Her concern, though, remains. It is regarding the long-term impact.

“For the last two years, Khurram was mostly confined to home. The bonding between him and the kids is very strong. Our concern is that Ahmed is growing, and he is very sensitive. He has begun to understand the politics in Kashmir. His father’s arrest will certainly have an impact on him,” she said.

The NIA booked Parvez under various sections, which include 120B, 121 and 121A of the Indian Penal Code, 1860 and Sections 17, 18, 18B, 38 and 40 of the Unlawful Activities (Prevention) Act (UAPA), 1967. According to the arrest memo and search-cum-seizure proceedings, copies of which The Federal possesses, the agency had registered an FIR on November 6 this year.

On the morning of November 22, another group of the counter terrorist task force (NIA) raided the office building of the Jammu and Kashmir Coalition of Civil Society (JKCCS), of which Parvez is the coordinator. The office is a stone’s throw distance from Parvez’s home.

Habeel Iqbal, a well-known lawyer based in South Kashmir’s Shopian, argued that the charges pressed against Parvez, at present, are “very grave”. “He has not only been accused of terror funding but of terror organisation membership too. This seems to be an attempt to make bail impossible for him and to keep him under detention for the longest period of time,” Iqbal told The Federal, hoping that the court releases Parvez on bail at the earliest.

“Hope the Court bails out Khurram Parvez at the earliest,” the lawyer added.

Calling Parvez’s arrest “unwarranted”, Mohammed Yousuf Tarigami, a veteran communist leader from Jammu and Kashmir said there is no justification behind the activist’s detention.

“Khurram Parvez was arrested in 2016 and released. Why he has been arrested now, people want to know,” he said.

Who is Khurram Parvez?

Khurram Parvez, 44, is one of Kashmir’s best known human rights defenders for over two decades. He has a degree in Human Rights and also a Master’s in Mass Communication and Journalism. Presently, he serves as the programme coordinator of JKCCS. Besides, Parvez is also the chairperson of the Philippines-based Asian Federation against Involuntary Disappearances (AFAD). As a university student, in 1996, he had started a helpline with the aim to provide peer counselling to students impacted by conflict in the Kashmir Valley. By the late 1990s, he was actively engaged in the research work done by the Srinagar-based Association of Parents of Disappeared Persons (APDP).

On April 20, 2004, Parvez had a miraculous escape while monitoring the assembly elections in north Kashmir’s Lolab. He lost one of his legs when a car carrying him and his colleagues was targeted using a high-intensity improvised explosive device (IED). Unfortunately, Parvez’s associate and fellow rights’ defender Aasiya Jeelani succumbed to her wounds.

Despite losing his grandfather in the Gawkadal civilian massacre (1991) in Srinagar, Parvez chose to document rights violations committed by all sides. The Kashmiri rights’ defender has won recognition and prestigious awards for his body of work spanning nearly two-and-a-half decades.

In 2006, he received his first global recognition: he won the 2006 Reebok International Human Rights Award. The coveted award recognises the work done by defenders under the age of 32 for human rights through peaceful means. As a peacenik, Parvez believes in dialogue and conflict resolution without resorting to violent means. He is an advocate of cessation of violence from all sides for a meaningful political resolution.

In September 2016, during the stint of the People’s Democratic Party (PDP)-led coalition government with its then partner the BJP, Parvez was not allowed to board a flight to Geneva, where the activist was scheduled to attend a UN Human Rights Council session. The concern of the coalition government and the Intelligence Bureau was that Parvez might “internationalise the rights violations in Kashmir and castigate Indian policies.”

At the time, the Kashmir Valley was on the edge following the killing of a popular militant commander Burhan Wani in July and subsequent killing of over a 100 civilian protesters in action by the government forces personnel to thwart an uprising.

Only a day after Parvez was off-loaded at New Delhi’s Indira Gandhi International Airport in September 2016, he was formally arrested from his Srinagar home. Initially, he spent at least four days at a sub-jail in north Kashmir’s Kupwara. Upon his release, the rights activist was re-arrested by the PDP-BJP government, this time under the stringent Public Safety Act (PSA). Parvez spent 76 days in a prison in Jammu. The Jammu and Kashmir High Court had quashed his detention under PSA while observing that Parvez’s “fundamental right had been infringed upon.”

Last year, the NIA had raided Parvez’s house and the JKCCS office in Srinagar. Various documents and electronic devices were seized then, too.

Global outrage against the arrest

Global rights bodies, advocacy groups and individual campaigners —including the United Nations Special Rapporteur, the Norway-based Rafto Foundation, FORUM-ASIA, and the People’s Union for Civil Liberties (PUCL) etc—expressed outrage at the formal arrest of Parvez. They demanded that all charges against the Kashmiri activist be immediately withdrawn and that he be unconditionally released.

In a formal statement issued from Bangkok and Kathmandu on November 24, the Asian Forum for Human Rights and Development said, “the arrest of prominent human rights defender Khurram Parvez by the NIA under the draconian UAPA and sedition charges highlights an alarming trend of harassment against defenders, particularly those in Kashmir.”

“The Indian government should unconditionally release and drop all charges against Khurram Parvez. The authorities must end their judicial harassment and targeting of Khurram Parvez and other human rights defenders in Kashmir,” Forum-Asia’s executive director Shamini Darshini Kaliemuthu said, adding that, “Since the abrogation of special constitutional powers to the erstwhile state of Jammu and Kashmir by the Indian government in August 2019, FORUM-ASIA has documented an alarming increase in arbitrary detention, harassment, and reprisals against human rights defenders in Kashmir.”

Mary Lawlor, UN special rapporteur on Human Rights Defenders, voiced her deep concern over Parvez’s arrest in a tweet: “I’m hearing disturbing reports that Khurram Parvez was arrested today (November 22) in Kashmir and is at risk of being charged by authorities in India with terrorism-related crimes. He’s not a terrorist, he’s a human rights defender.”

Similarly, the PUCL in a strongly-worded statement deplored the “relentless use of UAPA by the Indian Government to arrest, detain and jail human rights defenders for long periods without any trial,” while demanding Parvez’s immediate release.

The Rafto Foundation made an appeal to authorities to “respect Mr. Parvez’s habeas corpus rights and release him from detention without delay.”