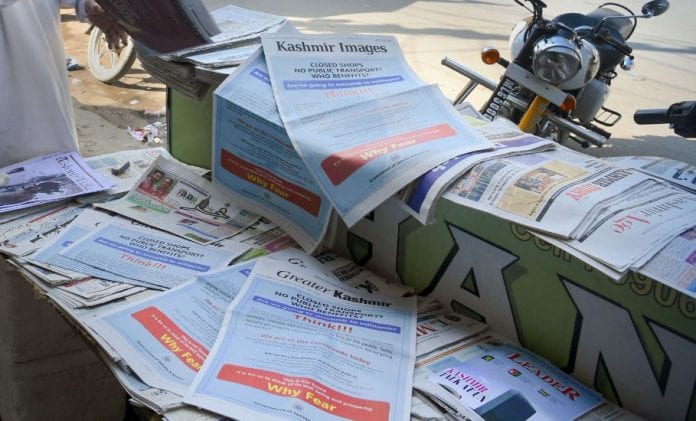 The new media policy announced by the Jammu and Kashmir government is facing stern criticism from journalists’ bodies and major political formations in the region, who have described it as an attempt “to kill journalism” and “a remnant of the colonial-era”.

The latest policy empowers the J&K government to take legal action against editors, media entrepreneurs, owners, publishers and journalists over what it would deem as “fake report”, “anti-national” and “unethical” content.

Critics are describing the move as yet another attempt to contain the Kashmir story and to control the narrative, while granting the government unbridled powers to act as a gatekeeper with the aim to further tighten the grip on the flow of news from the restive region. Besides, they say that the new policy is an assault on the freedom of press and free speech.

According to the new media policy, the J&K government, through its Directorate of Information and Public Relations (DIPR), could initiate legal action against journalists, besides curtailing or completely stopping advertisements to the media organisations.

The “Media Policy – 2020” allows the DIPR to “examine” the content of print, electronic and various other forms of media for “fake news, plagiarism and unethical or anti-national activities.”

Moreover, under the new policy, background check of editors and the staff of media houses has been made mandatory before empanelling them for government advertisements. This is apart from the “security clearance” required before any journalist is granted government accreditation through the DIPR.

“J&K has significant law and order and security considerations, it has been fighting a proxy war supported and abetted from across the border,” the 50-page policy document reads. “In such a situation, it is extremely important that the efforts of anti-social and anti-national elements to disturb peace are thwarted.”

The Press Information Bureau (PIB) in Delhi issues accreditation to journalists after police verification. Rules differ according to states with some insisting on background checks by the police or Intelligence Bureau. The Registrar of Newspapers of India seeks elaborate information from applicants, which includes details of owners, verified by district magistrates.

The Srinagar-based Kashmir Press Club (KPC) will be meeting soon to discuss the new media policy threadbare and come up with its official response. The office bearers of the influential body, however, already had a telephonic conversation over this matter.

Shuja Ul Haq, president, KPC, said the new media policy appears to take a hit essentially on the newspaper industry and its revenue in Jammu and Kashmir. “We are studying the media policy in detail and will come up with our response over the same,” Haq told The Federal.

In no uncertain terms, the new media policy says that “there shall be no release of advertisements to any media which incite or tends to incite violence, question sovereignty and the integrity of India or violate the accepted norms of public decency and behaviour.”

Ishfaq Tantry, general secretary, KPC, sees the media policy as a “serious threat to press freedom in J&K.” Speaking to The Federal, he argued that “the need of the hour is that all journalists, editors and newspaper owners devise a joint response. Journalists, as real stakeholders, have neither been consulted nor taken on board before framing the media policy.”

Worryingly, the media content analyses and interpretations are to be done by a government organ, DIPR, which has angered many in Kashmir. Particularly, key media analysts in Kashmir find it bizarre that a government organ will have unrestrained powers to act as the judge, jury and executioner.

Anuradha Bhasin, executive editor of the Jammu-based English daily Kashmir Times, said that the new media policy “is constitutionally untenable.” “Clearly, this is an attempt to kill journalism,” she told The Federal, adding that “such a policy is aimed at intimidating journalists. Otherwise, there are existing laws which deal with anything unlawful.”

Bhasin argued that the distribution of advertisement to newspapers in Jammu and Kashmir was never rationalised. The day she moved the Supreme Court, challenging the restrictions on journalists and the communication gag in J&K after the state was stripped of its semi-autonomous status and statehood last August, the government had stopped advertisements to her newspaper.

“The media policy completely goes against the very idea of independent journalism. This can be challenged and fought legally,” said Anuradha Bhasin.

Other media commentators wonder “how can a government body with an obvious conflict of interest act as the media watchdog?” “The new media policy is akin to criminalising journalism in Jammu and Kashmir. The government will find all stories critical to the government as ‘fake, unethical or anti-national’,” Riyaz Ahmad, a distinguished media analyst, told The Federal.

Interestingly, the major unionist political parties in the region have used stronger vocabulary to deplore the new media policy. The J&K National Conference said that it seems to be “a remnant of the colonial-era censorships.”

“The new media policy obliquely stifles the media’s right to ask questions and highlights lacunae in the working of administration,” said Imran Nabi Dar, the provincial spokesperson of the NC. It is an assault on the freedom of speech and the role of press in a democracy, he added.

The Jammu and Kashmir People’s Conference (JKPC), led by incarcerated Sajad Lone, described the new policy as “the lowest of the low to mute the muted.” Terming it as a brazen attempt to curb media freedom, the party said that the policy was “plain censorship where the government defines ethics of journalism. The government wants to see the reality not as it exists, but how it wants the situation to be reported.”

“In the case of Kashmir, this (media) policy will be at its coercive best. With such policies, India now joins the notorious club of the most repressive regimes of the world in terms of freedom of expression,” JKPC chief spokesperson Adnan Ashraf Mir told The Federal.