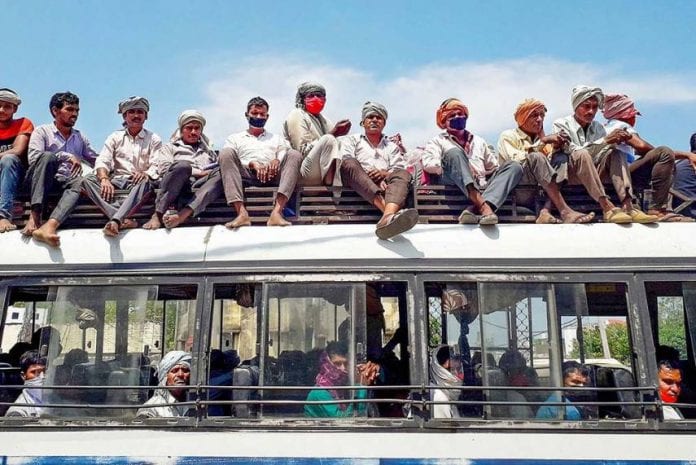 Bihar has been witnessing an unprecedented return of migrant workers from other states due to the COVID-19 lockdown. Lakhs of dejected labourers have returned home jobless. With assembly elections in the state barely five months away, their homecoming has raised a question in the minds of many. Will it change the course of politics in the state?

As the elections near, political parties in Bihar are working overtime to woo the migrants. The Opposition Rashtriya Janata Dal (RJD), headed by jailed politician Lalu Prasad, has seen an opportunity in the adversity and gone all out to channelise their anger against the present regime to convert it into votes.

On the other hand, the ruling National Democratic Alliance (NDA), headed by Chief Minister Nitish Kumar, has opened its purse strings to dole out cash and other facilities in a bid to and water down their anger.

Related News: Bihar likely to see rise in COVID-19 cases due to inflow of migrants

According to a report, around 30 lakh migrant labourers from Bihar have registered with the government to avail the monetary benefit of ₹1,000. However, the total number of people who had migrated out of Bihar seems to be around 50 lakhs as many don’t have smartphones or not used to technology.

As per 2001 Census and the National Sample Survey Organisation (NSSO) data, more than 52.6 lakh people from Bihar had been residing in other states. This is nearly 6.3 per cent of the state’s total population in 2001.

As anti-incumbency is likely to play a major role in the elections, the RJD has found the migrants issue as a “god-sent opportunity” and has been overactive in turning things in its favour. “Now or never,” the party’s strategists believe.

Underlining the importance of the migrants, the RJD has instructed its party workers to rush to railway stations and roll out red carpets for the labourers. It has also gone a step ahead by asking the cadre to welcome the migrants with garlands, maintaining a distance from them.

“Party workers must go to nearest railway stations and welcome the returning migrants with all warmth, if possible with garlands. This is the time you should do something for the masses in distress and make them believe you are with them,” state RJD president Jagadanand Singh has told the workers.

He also asked them to keep a close watch on the facilities being provided to the labourers at state-run quarantine centres and highlight the mismanagements prevailing there. More than 1,32,000 migrant labourers who had returned to Bihar by Shramik Special trains are staying at the centres, said state disaster management secretary Pratyay Amrit.

Related News: Nitish asks officials to pull up socks as Bihar braces for influx of migrants

However, thousands of workers have gone on a rampage across the state, complaining lack of quality food, absence of potable water, unhygienic conditions and no bed facilities at the centres. There is no district from where the incidents of protests have not been reported.

Leaving nothing to chance, the Chief Minister is making every possible attempt to calm down the anger of the migrants. In the last 50 days, since the nationwide lockdown was enforced by Prime Minister Narendra Modi, Nitish has not taken a break and has been constantly holding meetings with the officials in his official chamber or through video-conference to review the efforts taken to provide relief to the workers.

To begin with, the state government announced that ₹1,000 would be credited to bank accounts of each migrant worker from Bihar stranded in various parts of the country. Then, it announced another aid of ₹500 to all those coming to Bihar. Besides, rules were relaxed to issue ration cards within a week to the poor.

Around 35 lakh people have applied for ration cards. Their applications had been rejected earlier for various reasons. But, amid the lockdown, the state government has issued orders for reviewing of these pending applications and issue ration cards soon.

Besides, the state government has announced clothes, mosquito nets, beds and utensils for the migrant workers at the quarantine centres. The state is also mapping the skills of the migrant workers in a bid to provide jobs in their hometowns. The state government is planning to create more man-days, said Anupam Kumar, secretary of information and public relations department.

Initially, the Chief Minister had constantly been opposing the Opposition’s demand to bring migrant workers back by buses, citing it would be a sheer violation of lockdown rules and sought amendment in the existing law. When the Centre allowed states to bring back people stranded in other states, he said it was totally impractical to bring them by buses.

He said it would require the state as many as 1.70 lakh buses to carry all of them home. Instead, he demanded for running trains for them. Finally, when the Centre ran Shramik Special trains for them, he had no option, but to make arrangements for them as the Opposition had already lapped up the issue by then.