RJD leader Tejashwi Yadav on Saturday (June 6) slammed the Nitish Kumar government over a controversial circular on migrants, later withdrawn by the police headquarters, prompting the JD(U) to shed its reticence and cross swords with the opposition leader.

In front of the RJD’s state headquarters in Patna, Yadav placed a huge banner with an enlarged screenshot of the circular, issued on May 29 but withdrawn on June 4, whereby districts had been alerted about “apprehensions of law and order problems” in view of the large-scale influx of migrants during the lockdown, besides “slim possibility” of migrants economic rehabilitation in the home state despite the governments “tireless efforts”.

Alongside the enlarged screenshot, on the same poster was the catchline: “Nitish Kumar owes an answer”. 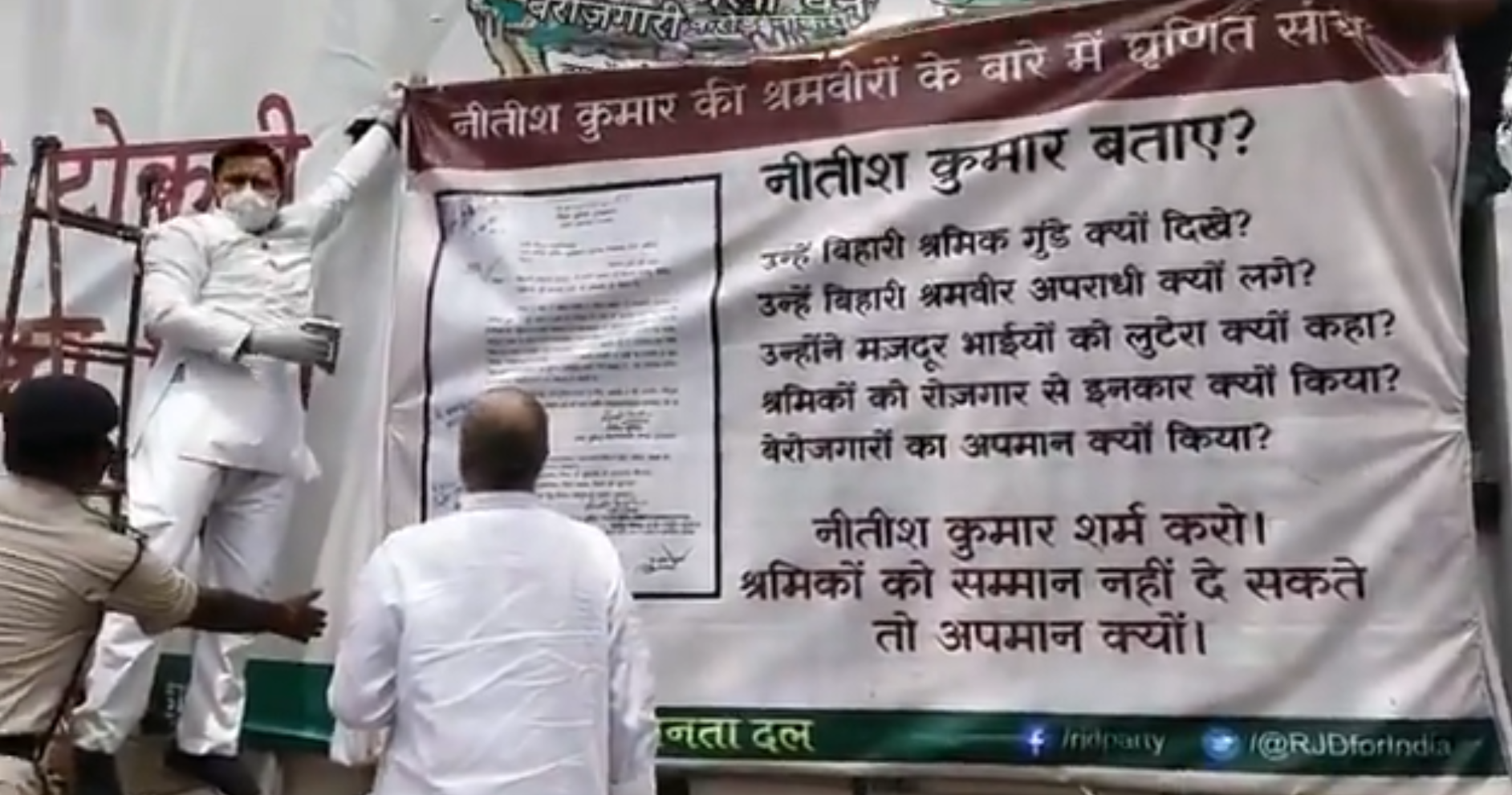 Beneath it were queries “why did he (Kumar) see the labourers as goons? Why did the shramveers (heroes making a living out of labour) appear to him as criminals? Why did he call them lootera (those involved in looting)? Why did he go back on his promise of providing them employment?”

The 30-year-old younger son of RJD supremo Lalu Prasad, named by the party as its Chief Ministerial candidate for the assembly polls later this year, also shared video footage of his act at the Birchand Patel Marg state headquarters on his official Twitter handle.

“Respected Nitish Kumar, who is serving under the BJP, has got a letter issued by the Home department wherein many derogatory and unsavoury remarks have been made against our migrant brethren. They have been called thieves, looters, goons and criminals,” Yadav alleged in one of his tweets.

In another tweet, he said the banner has been put up to “expose the hateful approach towards the poor, of the incompetent Bihar government” and urged his “nyaypriya” (believers in justice) supporters to do the same in every street and locality, across all districts, blocks and panchayats.

The ruling JD(U), which has been embarrassed by the episode notwithstanding withdrawal of the letter followed by a clarification by the state police chief Gupteshwar Pandey that the communication was “based on inputs received by PHQ from many sources” which had “nothing to do with the government”, lashed out at the RJD leader.

The states minister for Information and Public Relations. Department, Neeraj Kumar, who has been one of the most voluble spokespersons of the party headed by Nitish Kumar, mocked the RJD leader for his use of the term “Shram veer” and called the former Deputy CM a “bhrashtachar veer” (corrupt).

“He is a bhrashtachar veer and the mahamandaleshwar (pontiff) of his brand of politics resides in Hotwar jail”, quipped the JD(U) leader, alluding to Lalu Prasad who had been lodged at the Ranchi prison upon his conviction in fodder scam cases before being shifted to a hospital because of multiple ailments.

Neeraj Kumar also mocked Tejashwi Yadav for organizing a program of beating utensils on Sunday, ahead of Amit Shahs proposed virtual rally which would mark the commencement of a digital poll campaign by the BJP which shares power in the state with the JD(U).

“Does Tejashwi Yadav hope to galvanize the people by becoming a nakalchi (copycat),” asked the Bihar minister, referring to a similar countrywide ceremony a few months ago in which people took part at the instance of Prime Minister Narendra Modi as a mark of respect to medical professionals and the resolve to fight the COVID-19 pandemic.

“He has not studied beyond eighth or ninth grade. His propensity for copying others suggests he wrote all his exams by taking recourse to nakal (unfair means)”, the minister said.

More than two million migrants are said to have returned to Bihar from across the country during the lockdown. Heart-rending tales of the ordeals they have undergone have hogged international limelight.

While many migrants are being lured back to their places of work by their employers, those who would stay back are being seen as a vote bank by the opposition as well as the ruling coalition.

Tejashwi in overdrive on hope of mid-term polls amid uneasy BJP-JD(U...