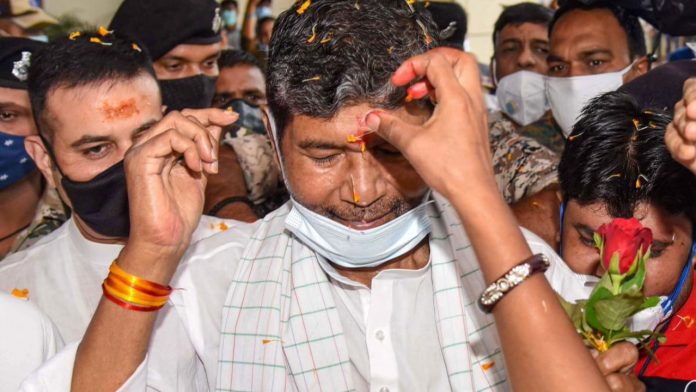 Pashupati Kumar Paras is a first-time MP and a six-term MLA. PTI Photo

The ouster of Chirag Paswan from LJP is complete – a little over eight months after his father and party founder Ram Vilas Paswan passed away. His uncle, Pashupati Kumar Paras, formally took over the reins of the Lok Jan Shakti Party on Thursday (June 17).

Lok Sabha Speaker Om Birla has accepted Paras as the LJP floor leader in the House instead of Chirag Paswan. Paras has been listed as the Lok Sabha LJP leader in a revised list of floor leaders of parties. The rebel faction has thus got the official endorsement.

Paras, the younger brother of LJP founder Ram Vilas Paswan, has taken over all leadership positions in the party since Monday (June 14). He and four other MPs broke away and asked to be treated as a separate group. The LJP has six MPs in the Lok Sabha, Paswan included.

Also read: Chirag lives up to his promise to ‘hurt’ Nitish’s prospects

The ouster of Chirag, who persists with taking legal recourse, became a foregone conclusion after the rebels removed Chirag as the party chief in an “emergency meeting” on Tuesday (June 15). Chirag in turn “expelled” his uncle and the other party MPs, forcing the entire episode into a political spectacle in which the BJP, the party he is enamored, and the JD-U, his bête noir, kept studied silence.

The Bihar-based LJP has a nil presence in the state assembly, where its lone MLA has already defected to the Nitish Kumar-led JD-U, even as the largest party, BJP, looks on with indifference at yet another severe jolt to the erstwhile socialist camp.

In court, the Speaker’s decision will strengthen the rebels’ position. Paras (71), is a first-time MP and a six-term MLA.

Also read: Chirag Paswan: My father instigated me to go it alone in Bihar

Paras was Ram Vilas Paswan’s close aide who turned against Chirag after his brother’s death in the run-up to the Bihar Assembly polls in November. The key issue was whether the LJP should go with the NDA under the leadership of Nitish Kumar. Chirag chose to stay away and took on Nitish Kumar even while seeking to keep his company with the BJP at the Centre.