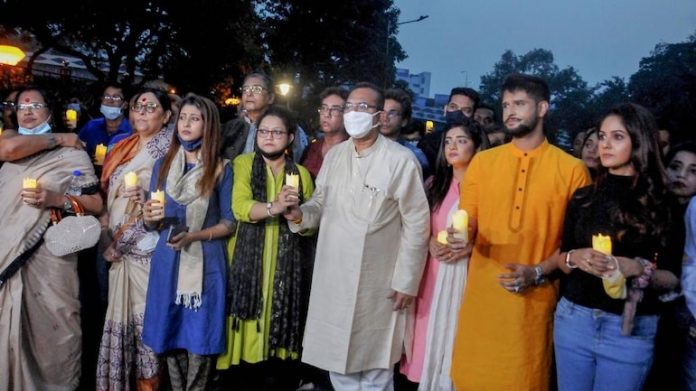 West Bengal minister Arup Biswas along with actors and singers at a silent rally to protest against the alleged attack on TMC leaders in Tripura.

The SC bench headed by Justice DY Chandrachud was hearing a plea made by the Trinamool Congress (TMC) party seeking contempt action against the Tripura government and others for failing to control violent incidents against Opposition parties in the run-up to the local body elections on November 25.

Hearing the TMC’s contempt plea petition, the SC bench told the Tripura government that they realise they are isolating in their home. But that they would give them an “hour and a half”.  “Take detailed instructions from the police and home secretary on exactly what arrangements are being made for today and tomorrow at the polling booths and safety measures for polling day right up till the declaration of results,” ordered the Supreme Court, reported Bar and Bench.

The judge told them to take these detailed instructions and to return at 12:45 pm. Further, the bench told the Tripura government counsel Mahesh Jethmalani that they want the government to make a statement on what security steps they were taking for “today, the pre-poll process, the polling process up to the declaration of results”.

When the TMC counsel Amar Dave told the court about the many incidents of violence taking place in Tripura, showing screenshot of the violence with “police standing by and doing nothing”, the SC asked the Tripura counsel advocate Jethmalani, “what the government is doing to ensure free and fair elections”? “When is the counting and what steps are you taking to ensure that nothing happens between today and the counting day”, the bench asked.

The Tripura government told the Supreme Court that it will provide a detailed report on security measures being taken ahead of the civic body polls at 3.30 pm on Tuesday.

The TMC had approached the SC alleging that despite a November 11 order, the situation in the state was steadily “worsening”.

On November 11, the top court had directed the Tripura ogvernment to ensure that no political party including the TMC, who are contesting the local body polls, are prevented from “pursuing their electoral rights and campaigning in a peaceful manner”. Moreover, the apex court had asked the state government to take appropriate arrangements for ensuring law and order for the unimpeded right of political participation in the municipal elections.

The court had also directed the state government to file an affidavit explaining the steps being taken in the light of its order and “to ensure that the process of election… remains free and fair”. Polling for a municipal corporation, thirteen municipal councils and six nagar panchayats in Tripura will be held on November 25.