The tell-tale sign of the “battle” was all-around at the ground zero of the July 26 border clash between Assam and Mizoram a week after it claimed six lives and injured almost 50 civilians and policemen from both sides. 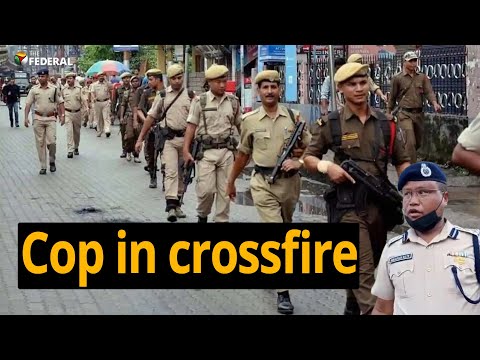 Charred and damaged vehicles were strewn on the stretch of the National Highway 306 meandering near the epicentre of the conflict – a Mizoram police camp. The plywood walls of the makeshift camp were riddled with bullet holes.

The camp, set up in June 2019 on a tabletop ridge following another flare-up along the border, turned into a battleground after the Assam Police had allegedly occupied it for a brief period on July 26 after pushing out Mizoram Police’s India Reserve Battalion (IRB) personnel.

The tin-roofed-plywood-walled camp was built to accommodate around 20 personnel – one section of a police force. Several hillocks overlook it from higher elevations.

On that ill-fated day, around 11.30am, about 200 fully armed Assam Police personnel led by their Inspector General, Anurag Agarwal, came in several vehicles, including a bus, to the camp, according to the Superintendent of Police of Mizoram’s Kolasib district, Vanlalfaka Ralte.

“They [the Assam Police] had arrived at the spot with tents and other materials for construction of camp, which clearly showed their intention to forcibly occupy the Mizoram BOP by force, as their convoy of vehicles consisted of ambulances and around 20 vehicles,” the Mizoram Police FIR said.

A few videos of the incident doing rounds in social media too showed a large number of Assam Police personnel teeming in the camp while their vehicles, including an ambulance, were parked on the highway below.

To come to the camp from the Assam side, one needs to cross a post of the CRPF’s 225 Battalions located just around 100 metres below the Mizoram Police’s encampment. The CRPF was deployed there as a neutral force to prevent any intrusion from either side to maintain the status quo along the disputed border.

Ralte alleged that the CRPF personnel headed by an assistant commandant did not stop the Assam Police personnel from crossing the status-quo line. Instead, they started saluting the Assam Police’s IGP, a senior IPS officer, he added.

The Assam government had alleged that setting up the Mizoram Police camp so close to the CRPF post was a violation of the status quo agreement between the two states reached a few years ago. Assam claims the camp is located at Lailapur in its Cachar district while Mizoram says the area falls under Kawngthar Veng (locality) of Vairengte in Kolasib district.

According to the Kolasib SP, after hearing about the arrival of the Assam Police at the camp, he rushed to the spot and tried to convince the personnel to vacate the place. But the Assam Police forced them to retreat to nearby ridges, he said.

In the meantime, hearing the standoff a large number of civilians from nearby villages of both states reached the spot, escalating the face-off further. Soon stone-pelting ensued. Mizoram civilians claimed Assam Police resorted to tear gas shelling, firing stun grenades and cane charges.

“After hearing the news of our policemen being chased out of their camps, we rushed to the spot from Vairengte village. The Assam Police tried to disperse us by firing tear gas shells and stun grenades,” said Samuel, an ex-serviceman who served in the Assam Regiment.

Major (Retd) Carolyne, another former member of the Indian Army, buttressed the claims of the villagers.

Amidst the skirmishes, Ralte claimed he got a phone call from his Cachar counterpart Nimbalkar Vaibhav Chandrakant around 2.30pm saying that the IG wanted to talk to him.

“I came and told the Assam IG that his men should vacate the place as this is our camp. But he did not listen. It was a long negotiation. The talks were on for more than an hour,” he said. 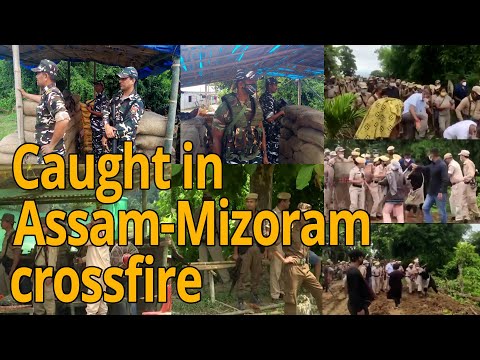 Even as the second round of negotiations was near the entrance of the IRB camp, the firing started around 4.40pm.

The Kolasib SP said it was the Assam Police who opened fire first, a claim contested by the other side.

He said the Assam Police fired from light machine guns taking cover behind the sand fortification.

“If it was not to protect their life, my men would not have fired because I was on this side negotiating with the Assam Police IG. I was in the firing line,” he said.

Caught in the crossfire, Ralte said, he initially got confused as to what was happening. Soon his PSO dragged him down the hill.

He then crawled his way to the CRPF camp seeking shelter, which was denied to him. “I was left stranded in the open amid a gun battle. I lay down on the ground behind a concrete structure. From there I could see Assam Police fleeing down the hills. After a few minutes, I sneaked into the gorge. From there I called my additional SP to stop firing. Then the firing subsided,” he said.

A video on social media showed that Cachar SP was calling for a ceasefire saying that he was hurt.

The Mizoram Police’s FIR said that around 5.30pm, after about 45 to 50 minutes of firing, a white flag was raised by the Assam side.

Most of the Assam policemen who died were in the camp area they had allegedly occupied in the morning.

The Assam Police personnel were sitting ducks for the Mizoram Police. The latter, though fewer in number, had the location advantage. They had taken a position on higher ridges some six to seven hundred metres away.

Moreover, the Assam Police were crowding in a small area where there was no fortified place to take cover from the hail of bullets, barring one each sandbag ‘bunker’ on either side of the entry point of the camp. Only seven to eight policemen at best could take adequate cover behind those sandbags. Hence they suffered the most casualties.

After the gunfight, Mizoram took back the camp. An eerie calm now prevails there as  peace has proved to be fragile along the 165-kilometre border the two states share.

(This reporter’s travel to the border was facilitated by the Government of Mizoram.)