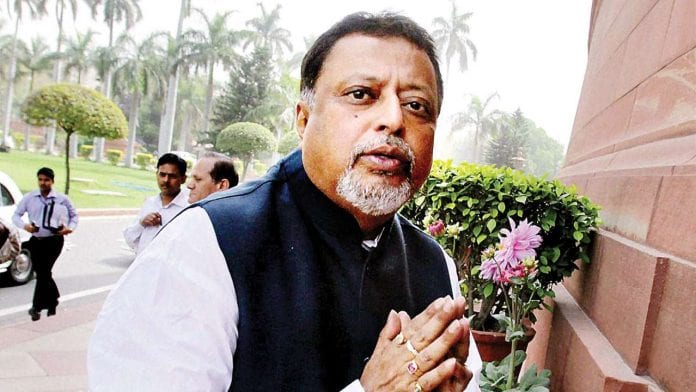 The BJP is exploring legal options to enforce the anti-defection law against its legislator Mukul Roy, who returned to the Trinamool Congress last week, even as the TMC reminded the saffron party to “practise what it preaches”.

The BJP on Thursday switched to proactive mode over the defection amidst speculation that more MLAs are ready to follow in the footsteps of Roy.

Leader of the Opposition in the assembly Suvendu Adhikari held a meeting with a group of party MLAs and a lawyer to work out the strategy to enforce the law, BJP sources said.

In the meeting, held in the leader of the opposition’s assembly room, it was decided that the party would immediately move assembly speaker Biman Banerjee seeking disqualification of Roy’s membership.

If the speaker failed to take action, the party would move the court, the sources added.

Also read: Mukul Roy is back in Trinamool; party says more leaders on their way

In the previous assembly, 18 lawmakers of the Congress and the Left had defected to the TMC without having to resign from the assembly.

Numerous requests to Banerjee, who was also the speaker in the previous assembly, to cancel their memberships went unheard.

The Congress and the Left had moved the court but the matter remained pending.

Roy, who rejoined the TMC from the BJP on June 11, said he had no intention to give up his assembly seat even as Adhikari had challenged that he would “make sure that the law is enforced this time”.

On Monday (June 14) Adhikari led a group of 50 MLAs to Raj Bhavan seeking Governor Jagdeep Dhankar’s intervention to invoke the law against Roy.

Incidentally, 24 other BJP legislators were missing in the delegation that called on the governor, sparking speculations about them jumping the BJP ship.

The speculation got momentum as a few MLAs had been frequently skipping party meetings since the BJP’s defeat in the elections.

The BJP now wants to use the anti-defection law as a deterrent against defection by its Bengal lawmakers as a last ditch attempt to prevent exodus of MLAs.

Just before the assembly elections, TMC leaders and lawmakers were lining up to join the BJP. Among those who had deserted the TMC then were Kanthi Lok Sabha MP Sisir Adhikari and his Burdwan East counterpart Sunil Mandal.

The Kanthi MP is the father of Suvendu. Pointing fingers at the two MPs who had switched parties without resigning their parliamentary seat, the TMC has now asked Suvendu to first teach the anti-defection to his father.

“If he [Suvendu] feels so passionate about the anti-defection law then he should first teach [the law to] his father, who retained his MP seat even after joining the BJP from our party,” TMC state general secretary and spokesperson Kunal Ghosh told TV channels recently.

It reiterated its request to the speaker earlier this week. Birla told the TMC chief whip in Lok Sabha Sudip Bandyopadhyay, who had called the speaker once again on June 24, that a committee had been formed to look into the matter and both MPs would be asked to appear before it.

Meanwhile, the Burdwan East MP has now turned rebel. He had criticised the BJP leadership for the party’s poll debacle and also claimed that Adhikari had betrayed him.

Many said Mandal changed his tune to protect his seat.

“We will continue to seek disqualification of both the MPs. Mandal’s recent realisation will have no impact on our position,” said senior TMC leader and MP Saugata Roy.

Clearly, the defection saga is getting more complex in Bengal.