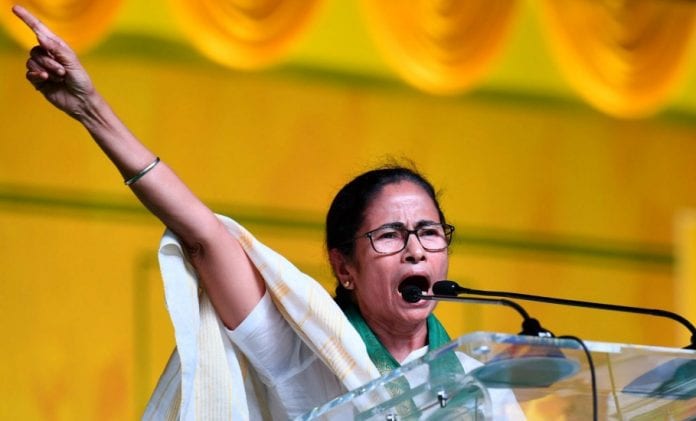 The gang-rape and subsequent death of a 19-year-old Dalit woman in Uttar Pradesh’s Hathras has flared up protests in West Bengal too as Chief Minister Mamata Banejee on Saturday (October 3) gave a call to build a massive state-wide movement over the issue.

The chief minister made the appeal from a protest rally her party Trinamool Congress had organised to condemn the incident, which is likely to find resonance in West Bengal politics where the BJP is desperately trying to woo the Dalit-Matua community.

She addressed the rally at the end of her about 3 km-long protest march, starting from Kolkata’s Birla Planetarium to the Gandhi Statue on Mayo Road. This is the first time after the outbreak of COVID-19 in the state six months ago that the TMC supremo has hit the streets to mobilise support against the BJP.

She had embarked on a series of protest marches across the state in the aftermath of the BJP government at the Centre, enacting the contentious Citizenship Amendment Act (CAA) in December last year.

The state BJP argues that the CAA would help a large section of the Matuas who had migrated to the state after the creation of Bangladesh in 1971. To counter the argument, the TMC supremo had then hit the streets.

The anti-CAA-NRC protests were suspended following the pandemic outbreak.

Calling the BJP a bigger “pandemic”, Banerjee said in every block of the state her party would organise protests to tell people about the BJP’s alleged stand and policies against Dalits, minorities, tribals, farmers and the youth.

“I am a Dalit today and I want all of you to be a Dalit to protest the injustice done to one of my Dalit sisters in UP by the BJP government there,” Banerjee said, adding she would continue to fight for the oppressed be it minorities, tribals or scheduled castes.

The TMC sources said to keep up the momentum generated by the chief minister’s protest march, the party would carry forward the agitation in other parts of the state from Sunday itself.

The BJP leaders in the state privately admit the attacks against the Dalits in other states could have some negative impact on the party’s attempts to make inroads among the Bengali Dalit community. They rue that the CAA has failed to influence the community much in favour of the party, and now these protests could further harm its prospect.

“Dalits and tribals were our (BJP’s) key support base in the 2019 Lok Sabha elections in the state. Naturally any anti-Dalit slur on the party when the assembly elections are just about six months away, is a matter of concern,” observed a state BJP leader.

He pointed out that the BJP leaders are already in the defensive, holding rallies and meetings across the state, trying to convince the farmers that the three legislations the Modi government recently introduced to reform the farm sector would be beneficial to them.

The CPI (M) and the Congress too upped their ante against the BJP jointly hitting the streets on Saturday to protest Hathras incident and also the alleged anti-poor policies of the Narendra Modi-led central government.