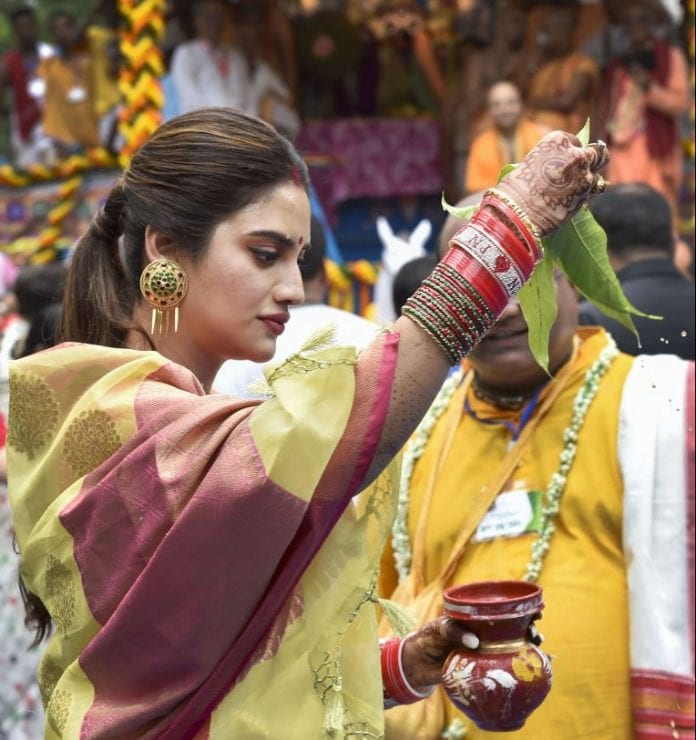 Nusrat Jahan at a rath yatra. Earlier this month, the actor-turned-MP had said that her marriage to businessman Nikhil Jain was not legal, leading to criticism from the BJP : File Photo: PTI

A BJP lawmaker has called for an investigation into Trinamool Congress MP Nusrat Jahan’s “illegal and unethical conduct”, and said action must be taken against her for giving false information to Parliament regarding her marital status.

Sanghmitra Maurya, who represents Badaun, in Uttar Pradesh, has written to Lok Sabha Speaker Om Birla seeking action or detailed investigation by the Ethics Committee of the House against Nusrat.

“TMC MP Nusrat Jahan in her bio [in Lok Sabha] mentioned that she is married and her husband’s name is Nikhil Jain. She took oath as Nusrat Jahan Ruhi Jain. Now she is saying that her marriage is invalid. I made an appeal to the speaker to take action,” Maurya said.

Earlier this month, the actor-turned-MP had said that her marriage to businessman Jain was not legal, leading to criticism from the BJP.

BJP IT cell president Amit Malviya asked if Nusrat had lied about her marriage on the floor of the House. Bengal BJP chief Dilip Ghosh called her a “a fraud”.

“What a fraud. A person who was given a ticket by TMC, took oath, now says she was not even married. However, she wore sindoor, dragged a rath, conducted pujas, and won the election,” Ghosh said.

The TMC MP recently released a statement saying that her marriage to Jain was according to Turkish law and was not valid in India.

“Since it was an interfaith marriage, it requires validation under the Special Marriage Act in India, which did not happen. As per law, it is not a marriage, but a relationship or a live-in relationship,” she said.

Nusrat and Nikhil Jain had a destination wedding in Turkey in 2019. Jain revealed that he had filed for an annulment in Kolkata. He refused to comment further on the matter as the case is sub judice. He admitted that the two have been separated since November 2020.