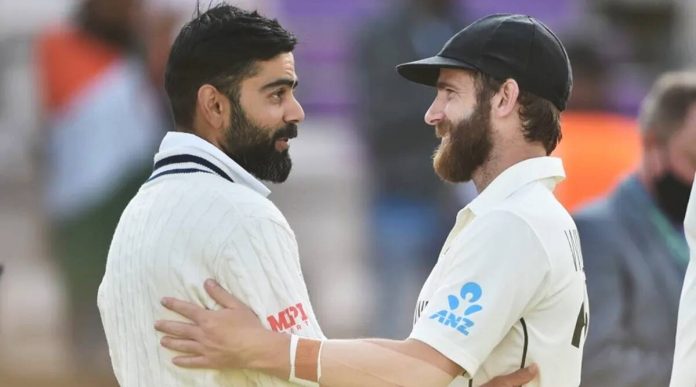 'Our friendship and relationship are deeper than a game of cricket. And we both know that' | Photo: Twitter

New Zealand captain Kane Williamson has opened up about his friendship with his Indian counterpart Virat Kohli, saying it is “deeper than a game of cricket”.

The two captains embraced at the end of the recent ICC World Test Championship final in Southampton, England, after the Black Caps became the first-ever team to get their hands on the WTC mace.

In an interview with Cricbuzz, the New Zealand captain spoke about the moment he rested his head on Kohli’s shoulder – an image that went viral on social media. “It was a really nice moment and our friendship and relationship are deeper than a game of cricket. And we both know that,” he said.

Find out from Kane Williamson what it was like picking up the ICC Test Mace for the first time. #WTC21 pic.twitter.com/YslSKb4FEE

Williamson said their friendship “stems back a number of years and a number of sort of different times”.

“At the end of it, after a long tough match like that, there’s an appreciation by both teams. Someone gets the trophy, and a team perhaps doesn’t get the fortune to have that. But we always know that there’s a bigger picture to it all.”

Williamson was also the captain of the New Zealand team that lost the 2019 World Cup to England despite having scored equal runs in both the final and the Super Over. After the heart-breaking loss, he said his team were not defeated on the pitch, but became a victim of “fine print” in the rules. “At the end of the day nothing separated us, no one lost the final, but there was a crowned winner and there it is,” he told Newstalk ZB.

In the rain-affected Southampton contest, India were restricted to 217 runs in their first innings. Although Kohli and his men managed to bowl out New Zealand for 249 in reply, they failed to put up a challenging target. The Black Caps bundled out India for 170 in the second innings.

Also read: The WTC final and the road ahead for India

“Both teams were very competitive and played really hard and the game was so close. I know the end result tells you one thing. Throughout the match, it felt like it was on a knife’s edge and you had full respect for that,” Williamson said in the interview.

The morning after leading his country to glory, Williamson drove to Taunton, Somerset, to spend time with his family. “I can think of many other ways a world championship-winning captain would want to spend the day after reaching that summit,” the interviewer told Williamson, to which the captain replied: “That was part of the plan. My family was in Somerset. I drove to meet them the next day. I had to do a couple of photoshoots before that and a couple of interviews. Then got in the car and drove to Somerset and started changing nappies. It’s a slightly unique way of celebrating.”