After missing out on breaking West Indies legend Brian Lara’s world record individual Test score of 400, the Australia fire-cracker opener David Warner believes that he will have another shot at it.

Warner was stranded at 335 not out when skipper Tim Paine declared the Australian innings on Saturday (November 30), day two of the second Test in Adelaide.

Lara, who was present at The Oval on that day was eager to meet Warner and congratulate him if the Aussie batsman went past 400 runs. However, later Warner took to Instagram to express his delight in sharing a picture with the legendary Windies batsman.

“Great to catch up with the legend himself. Maybe one day I will get another chance to Knock 400 off,” Warner said in the post. 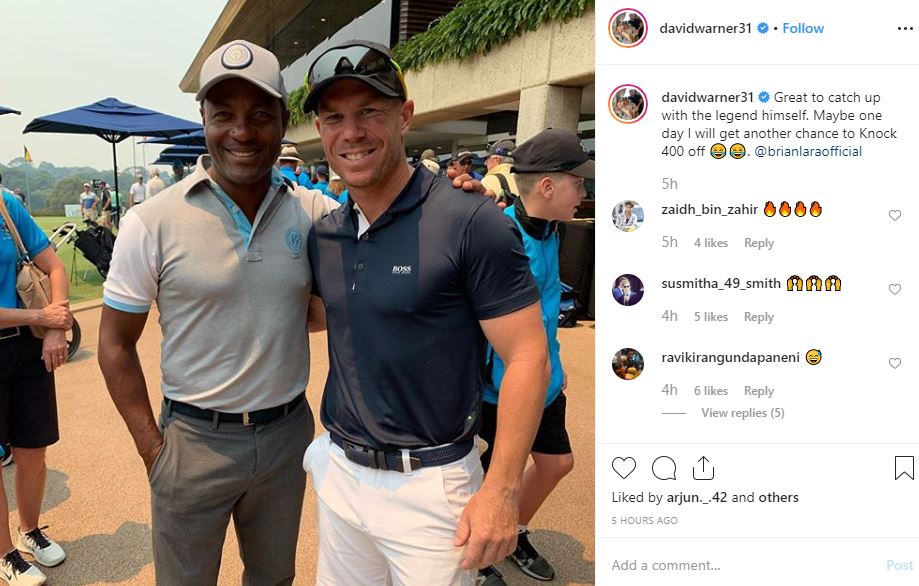 In fact, looking at Warner bat in an explosive manner, Lara feels that he will achieve the milestone sometime in the future.

“I still think Warner may have time to do it in his career. I know he is not a spring chicken but as soon as you get that 300 you know how to get 400. He may get another shot at it,” the former West Indies captain said.

Lara also hailed the fact that Warner’s attacking game is an advantage for the team as the intensity increases the chances to win.

“He is a very attacking player and that is the sort of player who can always set you up for a win. I know you need stabilizers but you also need one or two players like David Warner and Sir Vivian Richards who can take the game with their bats,” he said.

Lara broke the record of highest individual Test score twice, first when he overtook compatriot Gary Sober’s 36-year-old record of 365 by scoring 375 against England in 1994 and then again when he bettered his own record to reach 400 in 2004.