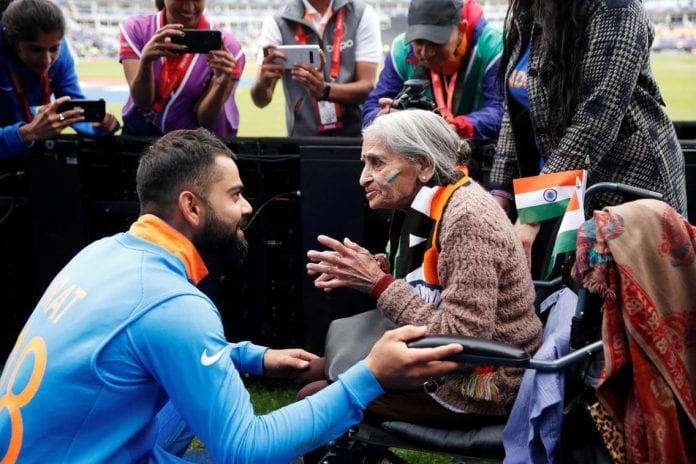 Charulata Patel, the 87-year-young cricket enthusiast at England’s Edgbaston stadium during the India VS Bangladesh match yesterday (July 2) will always be remembered when this the match is spoken about.

The woman proved the old saying that “age is just a number”.  She was often spotted on camera cheering for team India. With the tricolour painter on her cheeks and a whistle in handle, she gave younger fans a run for their money.

Her love for cricket attracted the Captain himself. Virat Kohli took his time out to meet the 87-year-old and tweeted an image of the meeting.

Also would like to thank all our fans for all the love & support & especially Charulata Patel ji. She’s 87 and probably one of the most passionate & dedicated fans I’ve ever seen. Age is just a number, passion takes you leaps & bounds. With her blessings, on to the next one. 🙏🏼😇 pic.twitter.com/XHII8zw1F2

And now, the internet can’t get enough of it.

How often have we seen this happen, on or off the ground? Quite often our hearts melt every time some act of kindness surfaces at a cricket stadium.

If Kohli’s tryst was with Charulatha, his deputy Rohit Sharma’s was with a young girl who got hit by one of his five sixes in the match, a gesture that again won much appreciation.

She got hit by a @ImRo45 maximum and the opener was kind enough to check on her and give her a signed hat.#CWC19 pic.twitter.com/KqFqrpC7dS

Heartwarming to see this gesture from the legend in Mumbai 🤗 @ChennaiIPL #VIVOIPL pic.twitter.com/6llHlenIzL

On April 4, after CSK lost the match to MI, Dhoni clicked a selfie with the elderly woman who was seen in the crowd with a placard declaring her love for Dhoni along with scores of fans. Captain cool being his usual self, obliged the fan, clicked pictures and gave her a signed CSK jersey as a souvenir. The images went viral.

So why do images like these strike a chord with people?  Simple. Because it is the people who make cricket the craze it has become in our country.

In a country of 1.33 billion people, cricket is the most followed sport and mints the highest amount of money, way more than hockey, the national sport, does.

According to reports, the latest India VS Pakistan match, broke television viewership records when one billion people reportedly tuned in to to watch it. Almost 8,00,000  people applied for the measly 23,500 seats at the Old Trafford cricket ground for the match.

The viewership crossed the 530 million mark which was when people saw the Moon landing live on television in 1969.

Indian Premier League which is the undisputed king of entertainment when it comes to cricket enjoys a television viewership of 1.25 billion according to BARC data report of 2017.

In a scenario like this, where cricket is as important as religion,  kind gestures by cricketers go a long way with the fans.

When a win is celebrated with much pomp and fare, a loss  evokes the same degree of emotional impact, but on the negative side.  For example Dhoni’s house got stone-pelted in October 2013 when he chose not to field first in the ODI between India and Australia.

Six years down the line he now enjoys a loyal fan base.

‘The game of gentlemen’ has gotten its strings attached to Indians and going by the data and ever increasing fandom of cricket, it is safe to say, it is the people and their emotional connect to the game and players that gives it the mammoth limelight it enjoys.