The Indian government on Tuesday (June 19), gave a written assurance to the International Olympic Committee that it has allowed Pakistani athletes and officials to visit and play in India “without any prejudice” to the country’s “principled positions and policies on other political matters”.

The decision was taken in view of the suspension of India’s hosting rights for international sports events after it didn’t allow Pakistani shooters to participate in the Rifle/Pistol Shooting World Cup earlier this year.

The decision means that India will soon be hosting events including the Tokyo 2020 Olympic qualifiers. The government has assured of hosting the event by saying “such commitment of the government stems from our world view of ‘Vasudhaiva Kutumbakam’ or ‘The World is one family’ which, in essence, is also the spirit behind the International Olympic movement”.

The IOC will first focus on lifting the ban and issuing visas to Pakistani athletes and sportspersons from Kosovo for participating in international events in India.

The hosting rights of India were suspended after the Indian government denied visas to two Pakistani shooters and their coach for the Rifle/Pistol Shooting World Cup, earlier scheduled to take place in Delhi in February this year, after 44 CRPF jawans were killed in the Pulwama attack.

The government had also banned a female Kosovan boxer from participating in the Women’s World Boxing Championship in November last year stating that India doesn’t recognize Kosovo as a nation.

The move also stands to give chances to the Pakistan women’s cricket team to visit India for the bilateral ODI series between July and November this year as part of ICC’s Women Championship, to qualify for the Women’s World Cup 2021. 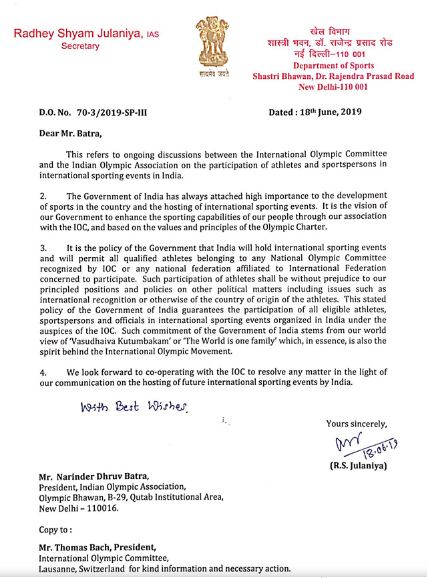 The BCCI had written to the sports ministry last month, seeking permission to host Pakistan’s women’s team but they shifted the appeal towards the Ministry of External Affairs. The decision will also allow the Pakistan Table Tennis team to participate in the Commonwealth Table Tennis Championships scheduled in Odisha from July 17 to
22.

The letter also stated that the Indian government has always attached high importance to the development of sports in the country. “It is the vision of the government to enhance the sporting capabilities of our people through the IOA’s association with IOC, based on the principles of the Olympic charter,” the letter read.

It was also decided in April 2019 between the Sports Ministry and Indian Olympic Association that the new government will reach a consensus on the same and resolve the issue.