India taking on Australia at The Oval on Sunday (June 9) will perhaps be one of the most high-profile matches this World Cup season with the ultimate rivals looking forward to keep their winning streak intact.

The clash is expected to be largely a battle between the bowlers of the two teams, given the pitch remains unpredictable and both the teams get only one day for practice. 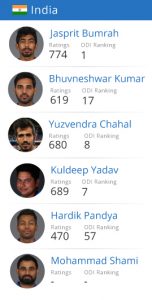 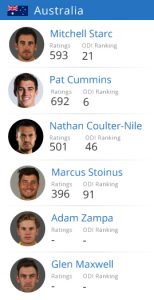 In earlier instances, The Oval has been highly favourable to the pacers and sometimes to the spinners as well.

The battle between India and Australia will be close as both the teams have at least five bowlers ranked within the top 100 by the International Cricket Council in ODIs.

If the teams don’t change their line-up, the clash shall witness quick wickets in the middle and the death overs.

The climax of a match is as important as the one in the movies. The performance of the bowlers during the death overs is what determines the target to be chased and how they can restrict a team.

Ranked 1 by the ICC, India’s Jasprit Bumrah has been labelled “one of the best death bowlers in the world” by South Africa’s Quinton deCock. His skill of in-swinging yorkers and bowling at varying pace with pre-determined drop points makes him a difficult-to-play bowler even for the pros.

However, Australia’s Mitchell Starc took everyone by surprise when he became the first bowler to score 150 ODI wickets and derailed West Indies by picking up 5 wickets and restricting them in the death overs at Nottingham on Thursday (June 6).

The most crucial time in a match are those middle overs that can turn the game upside down. Wickets in these overs can break the backbone of a team and restrict them from setting or chasing an unbeatable target.

India’s Yuzvendra Chahal, Kuldeep Yadav and Hardik Pandya are known for their show of skills with the surprise spin of the ball and reverse swings that made it impossible for the Men In Blue to steal the match from South Africa on Wednesday (June 5).

Australia is no less when it comes to spinning and showing extraordinary change of pace in the middle overs. Bowler Adam Zampa, all-rounder Glenn Maxwell and pacer Marcus Stoinis are going to be hard to tackle by the Indian batsmen if they don’t put their best foot forward. The trio had thrashed their opponents West Indies, known to have the big hitters such as Chris Gayle and Andre Russell.

The pressure would be high when the spinning trios lock horns to make or break the game.

The right opening: Kumar and Shami vs Cummins and Coulter-Nile

Runs allowed in the first 10 overs can give a head-start to the opponent and hence, the opening overs demand the most number of maidens. India, here, has its maiden specialists Bhuvneshwar Kumar and Mohammad Shami who’ll be battling for the throne with Australia’s most experienced opening bowlers Pat Cummins and Nathan Coulter-Nile who are well-versed with their use of the bat as well and clinched the match from West Indies even after losing eight wickets by the end of the 44th over.

Cricket is no more a batsman’s game. It is now the battle of the bowlers who are tend to put up a show to watch in The Oval at 3 PM IST.

Australia pushes for trade links with India after trade spat with Ch...