July 28, 2022 marks a momentous day in the history of Indian chess. For the first time ever, the country will host the Chess Olympiad and it is fitting that Tamil Nadu has got the honour to organise this mega event.

The state of Tamil Nadu is the powerhouse of chess in India, and the city of Chennai is known as the ‘Mecca of Chess’.

So far, India has produced 74 Grandmasters (GM) and 26 of them come from Tamil Nadu, which is over 35% contribution to the country’s GM list. It also has seven Woman Grandmasters (WGM), including India’s first S Vijayalakshmi. As of July 17, 2022, India has 1,10,477 players in the FIDE rating list and has outnumbered Russia, which has 1,06,209.

Aaron, one of the pioneers

When we talk about Tamil Nadu’s chess history, everyone talks highly about Aaron’s contribution. Born in Burma (now Myanmar) in 1935, his family moved to India during the Second World War. 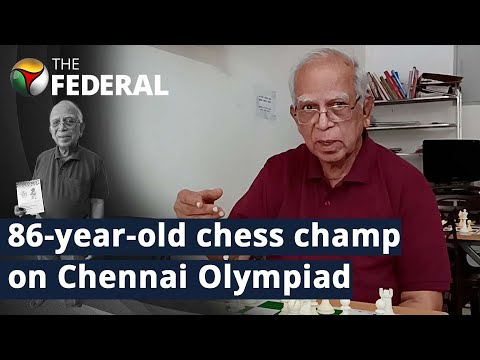 “We were driven out of Burma by the Japanese during the Second World War. After coming to Madras (now Chennai), I started playing chess as a seven-year-old. I cannot play any other game. I took up the sport after watching my father play. Even my grandfather played chess,” recalls 86-year-old Aaron in an exclusive interview with The Federal.

In 1961, Aaron became India’s first International Master. From there onwards, Aaron involved himself in the sport and changed the scene in Tamil Nadu. He was a nine-time national champion and also served as the secretary of the All India Chess Federation (AICF) and Tamil Nadu State Chess Association (TNSCA).

Aaron founded the Tal Chess Club (named after former world champion Mikhail Tal) in 1972 which paved the way for many to take up chess. It was housed in the Soviet Cultural Centre in Madras.

“Tal Chess Club was started on August 14, 1972. We wanted to launch on August 15, Independence Day, but then it was a holiday for the Soviet Cultural Centre, we inaugurated one day earlier. At the time, I had an ambition that in 15 years (by 1987), the club should produce a world champion,” Aaron said.

However, according to Aaron, his dream was not fulfilled. But he was proud that Viswanathan Anand had become a junior world champion in 1987; it made up for the disappointment.

“Anand’s earlier days as a chess player were entirely spent at the Tal Chess Club. The club played a very important role in Anand’s career and many other youngsters. Our club was the only place where we could play only chess. Though we had YMCA to play chess but there were other activities as well there. We never thought YMCA as a chess-playing centre, we had a lot of difficulties there,” explained Aaron.

According to him, Chennapuri Andhra Mahasabha in Madras too played a huge part in the development of chess in Tamil Nadu.

Thanks to Aaron, players like Anand and many others could access chess books from Russia. As those books and magazines were in Russian, Aaron made it a point to learn the Russian language, besides learning German, and imparted those lessons to the locals.

A young Anand would pose a lot of questions to Aaron.

“Anand used to ask me a lot of questions. However, for some, I did not know the answers as I was only translating what was in Russian books,” said Aaron.

Later, Anand went on to beat Aaron three times. “Anand beat me thrice. He was superior to me. At the time, I knew he would become a great player,” recalled Aaron.

Another reason for Tamil Nadu’s growth in chess was Aaron’s Chess Mate magazine. It started in August 1982 and still continues to be published with Aaron and his son Arvin Aaron writing about the sport.

Aaron says Tal Chess Club was established with the support of the Soviet Union, and had to wind up when the Soviet Union collapsed. However, Aaron set up another academy and continues to coach youngsters.

“Explosion of chess” in India happened due to Bobby Fischer who won the world title in 1972, and Anand, says Aaron.

“Tamil Nadu has been a leader in chess for many decades. There are many reasons for this. The state has produced many talented players starting Manuel Aaron, India’s first grandmaster, Viswanathan Anand, Woman Grandmasters S Vijayalakshmi and Aarthie Ramaswamy. The achievements of these players motivated youngsters to take up chess,” Ramesh told The Federal.

“Aaron has played a huge part in Tamil Nadu’s chess success story. With his Tal Chess Club and Chess Mate magazine, and importing chess equipment, Russian books on chess, Aaron was the guiding light for all of us, including me. The Tal Chess Club was the main meeting point for all chess players in Chennai,” Ramesh who is now India ‘B’ team coach for the Chess Olympiad in Chennai, said.

Ramesh coaches around 100 youngsters (in person) in Chennai while more than 1,000 from across the globe join for online chess classes.

According to Ramesh, Anand has been a ‘one-man army’ in popularising the sport in the last few decades.

“Anand is a one-man army. It is like all the planets are revolving around the Sun. He is the main pillar of chess in Tamil Nadu and in the country. He is just pulling the kids away from computers, TVs, and mobile phones. He is a strong role model. He is playing a huge role. In fact, I came to chess after he became a GM,” Ramesh was effusive in his praise for the five-time world champion, who will be seen as a mentor for the Indian teams at the Olympiad.