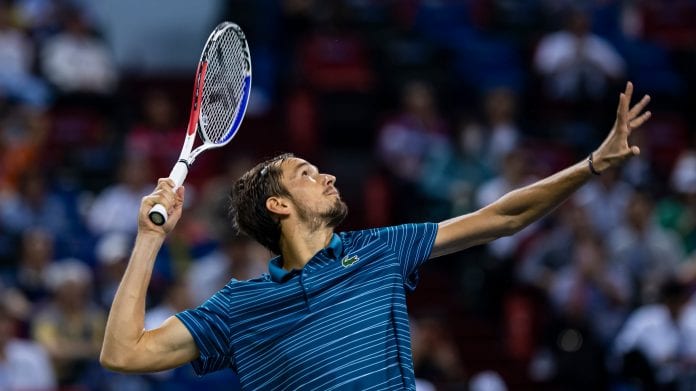 World number one Novak Djokovic calls him a “complete” player and his Shanghai masters rival Alexander Zverev feels his unique style makes him one of the best in men’s tennis in his current form.

He is the US Open finalist Daniil Medvedev, who is now eyeing tennis great Roger Federer’s world ranking third spot before he goes on to chase the first Grand Slam title next year.

The 23-year-old said he had been “invincible” as he won the Shanghai Masters with a ruthless 6-4, 6-1 demolition of Zverev on Sunday (October 13).

The Russian beat Stefanos Tsitsipas in the Shanghai Masters semi-final and got critisised by the 21-year-old Greek by calling his way of winning “boring”.

“So he has a huge serve and if you manage to get it back, it’s just countless balls inside the court… (all) you can do is hit as hard as you can side to side, be accurate, and make him move. Otherwise you can just play it back to him and play it again and play it again.”

But effective? Certainly, because Shanghai was Medvedev’s sixth final in a row. Even before losing to him for the first time in five meetings on Sunday, the 22-year-old Zverev said that Medvedev was the best player in the world right now.

And after losing the final to him in straight sets, the sixth-ranked German gave an insight into what makes the fourth-ranked Russian so hard to beat. Zverev took issue with the “boring” tag.

“I actually think the opposite. Daniil is somebody that plays a way that we have never seen before,” said Zverev.

“That is not boring to me.”

Zverev said the 2019 Medvedev is a wholly different proposition to the one he has repeatedly defeated before.

Elaborating on what he meant about Medvedev’s style, Zverev added: “Maybe he doesn’t do huge winners or jumping forehands or anything like that.”

“He plays very flat, he plays with shots that you can’t really do anything with the ball, and that is difficult to play against him in an aggressive way.”

“Sometimes that’s maybe why it looks on TV or from the outside that players are not playing as aggressive against him as against others, but I feel like he doesn’t let you.”

Medvedev has been a known quantity to tennis fans for a while and he won three titles last year. But since this summer the Russian has stepped up to a whole new level. He announced himself to the broader sporting public with an agonising five-set defeat to Rafael Nadal in the US Open final in September.

Speaking on Sunday in Shanghai, Medvedev said that “something clicked” in the United States, where his run of six finals on the bounce began in July-August. But if he knows what it is, he is not saying.

“I maybe started to understand something more about myself, and I’m not really sure what,” he said.

But the Russian freely admits that his gangly frame does not give him the raw power that many of his rivals possess — so he tries to play what he called “smart” instead.

“Like even talking about the serve, I improved it a lot. But, for example, I cannot serve 230 (kmh).

“I don’t know why, but I cannot do it, so I have to play with my game.

“And as I say, I started to understand my game much more and trying to mix things up, trying to choose the best shot possible in every situation.