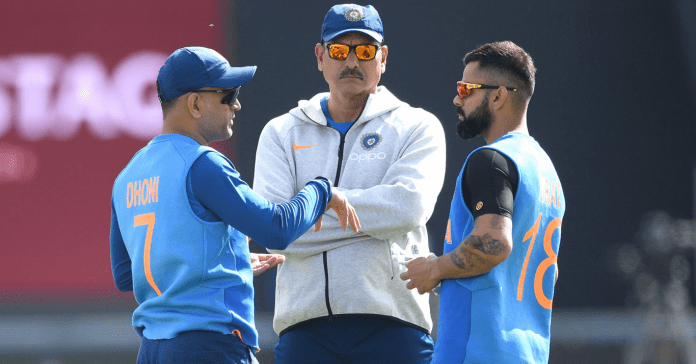 Days before the T20 World Cup began, Virat Kohli said, “I understand we’ve lost some time without cricket (during the pandemic) but in trying to cover that up, if you lose players then world cricket is not going to be better off. So there has to be a balance in the future." Pic: Twitter

India’s drubbing in the T20 World Cup and consequently cricketers complaining of exhaustion due to long stays in the bio-bubbles have compelled the Board of Control for Cricket in India (BCCI) to evaluate the workload on players ahead of the New Zealand tour.

Outgoing coach Ravi Shastri and his successor Rahul Dravid too have said that IPL, immediately followed by the World Cup, left the players with no time to rest.

Shastri said after India’s exit from the T20 World Cup: “I am mentally drained, but I expect that at my age. These guys are physically and mentally drained, six months in a bubble, and we would have ideally liked a bigger gap between the IPL and the World Cup. It’s when the big games come and when the pressure hits you – you are not that switched on as you should be. And it’s not an excuse.”

Days before the T20 World Cup began, Virat Kohli said, “I understand we’ve lost some time without cricket (during the pandemic) but in trying to cover that up, if you lose players then world cricket is not going to be better off. So there has to be a balance in the future.

The current Indian team has been in a bio-bubble since the World Test championships against New Zealand in June, followed by a full-fledged series against England, second half of the IPL in Dubai and T20 World Cup now.

BCCI secretary Jay Shah is expected to head the panel that will assess the workload management of players. While bio-bubbles is a reality and is likely to stay for some time, the BCCI wants to make sure COVID safety does not affect the mental well-being of players henceforth.

While Rohit Sharma has taken over as the T20 captain for New Zealand’s tour of India starting November 17, the BCCI — and not the selectors who usually decide whom to rest — has decided to give Virat Kohli, Jasprit Bumrah and Ravindra Jadeja a break for the first T20.

The Indian Express quoted a senior official to say that from now onwards the BCCI will decide on which player needs to be rested. “We are aware of the fatigue issue. The player who has been rested will get his place back in the team even if the replacement does well,” the official said.

The team physio will submit his report on every player to head coach Rahul Dravid, who will then discuss the matter with BCCI secretary Jai Shah, before selecting the team.

The BCCI, on its part, will ensure only the best players get to play and the board does not end up sending a second-string side for the sake of television rights and sponsorships.

While the BCCI deliberates on reducing cricketers’ workload, the coming few months are going to be hectic for Team India nevertheless.

The home series against New Zealand starts on November 17 with a T20 in Jaipur. The two teams will play three T20 Internationals and two Test matches. In December, India will travel to South Africa to play three Tests, three ODIs and four T20s.

In February, India will play three ODIs and three T20s against the West Indies. Immediately after that series, India play Sri Lanka in March. The IPL will be played in April.