People may have experienced vibrations in their cars during a tour or a ride. To provide them with a smoother ride, a team of researchers from the Indian Institute of Technology (IIT) Madras have found that the ‘Carbon Nanotube Composites’ contribute in absorbing the vibrations in automobiles quite efficiently.

“In an approach to absorb vibrations, we have done one method of absorbing vibrations by using tube-like carbon nanomaterials or tubes. We have embedded these particles into the polymers. When the vibration tries to go through the polymers, the internal structure of carbon nanotube is such that it is doing some internal movement within itself, that absorbs the energy of that movement, and therefore we get fewer vibrations” said Prof. Prathap Haridoss, Department of Metallurgical and Materials Engineering, IIT Madras.

The properties of carbon nanotubes (CNTs) – nanometre-sized molecules made of rolled-up sheets of carbon atoms – can tremendously improve mechanical, thermal and electrical properties of polymers. Of the numerous attractive properties of CNT-polymer composites, their vibration damping properties make them useful in aerospace, automobile and construction industries.

Prof. Haridoss and his collaborators work with a special class of composites called polymer nanocomposites. The discovery that nanoparticles – particles a hundred thousand times smaller than the thickness of a sheet of paper – can afford extraordinary properties to polymers, is the basis of such composites.

“Carbon nanotube (CNT)-reinforced polymers combine the viscoelastic properties of the polymer with the interfacial properties of the CNT, resulting in enhanced vibration damping. Thus, CNTloaded polymers can conceivably give you a smoother ride on your car. The team decided to find out why,” explained Prof. Haridoss.

The research team used MWCNTs synthesized by different techniques and loaded them into Epoxypolymers. MWCT’s are made of concentric tubes of carbon and the slide between the layers are believed to damp vibrations. Naturally, the efficacy of damping would depend on the nature of the MWCNTs. 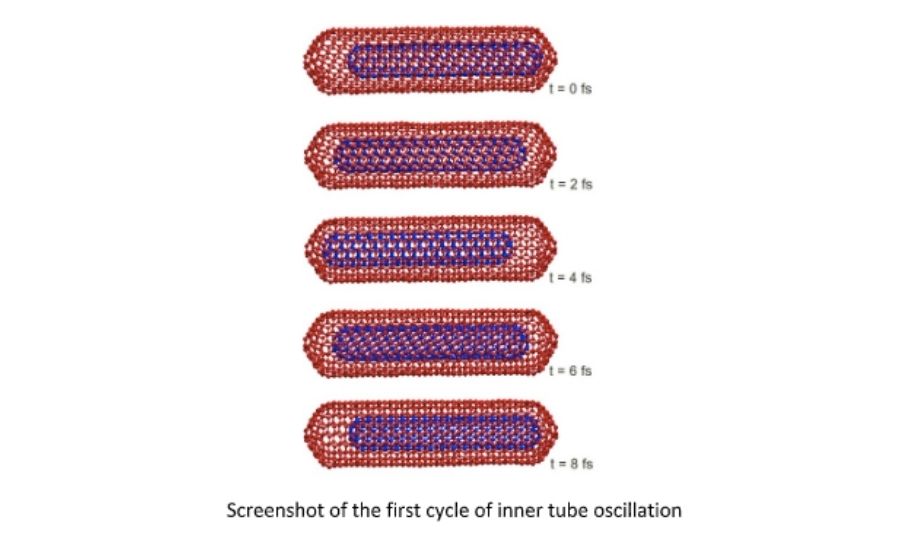 For example, MWCNTs prepared by a process called Plasma Arc discharge Method, are straight and long, while those prepared by Chemical Vapour Deposition are coiled. As can be imagined, the straight long nanotubes would have better layer slide between walls, and thus better vibration-damping effects than the coiled nanotubes.

This was exactly what the researchers observed in their work. Further, Prof. Haridoss added, “In order to visualize the damping effects of the two types of MWCNTs, the researchers performed computational simulation studies. Our simulation studies have shown beyond doubt that the vibration damping properties in MWCNTs arise from an interaction between atoms that constitute the inner and outer tubes rather than the inter-tube frictional energy loss.”