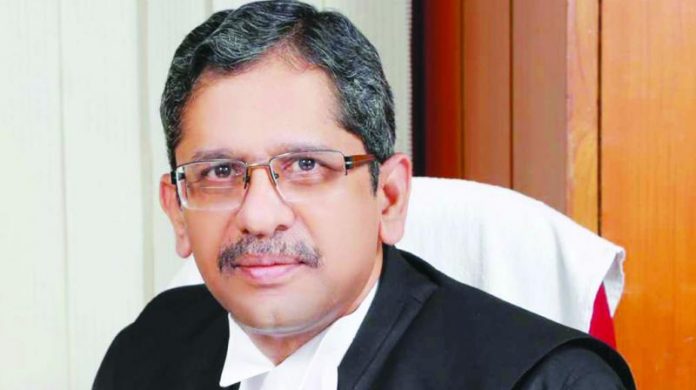 Justice N V Ramana, who has given dynamic directions for speedy trial of cases involving ministers and legislators, will be the 48th Chief Justice of India. His term offers a new hope of quicker trials in criminal cases involving politicians holding constitutional positions.

In a peculiar case, Andhra Pradesh Chief Minister YS Jagan Mohan Reddy, with more than a dozen charge-sheets against him, made allegations of bias against the state judiciary and the second senior-most judge of the Supreme Court.

The decks were cleared for Justice N Venkata Ramana’s elevation after the publication of a statement on Wednesday that a complaint sent by Chief Minister Reddy against Justice Ramana to the CJI on October 6 last year was dismissed under an in-house procedure “on due consideration.” The SC said: “It (should) be noted that all matters dealt with under the in-house procedure are being strictly confidential in nature and are not liable to be made public.”

For the first time in the Indian judicial history, a chief minister has levelled very serious allegations against a senior judge who was in line to become the next chief justice, kicking off a nationwide debate and all sorts of comments on social media. Besides writing a long letter, the chief minister also made his Secretary Ajey Kallam to address a press conference to give details of the complaint. Reddy alleged the state judiciary was biased against him and blamed Justice Ramana for that.

Justice had Ramana led a bench that has taken up issues involving criminal charges against politicians holding Constitutional offices and directed all high courts to supervise speedy trials in charge-sheets to relieve governments from the control of such leaders.

The Justice Ramana bench was in fact doing what most Indians have wanted, but influential leaders have been trying to scuttle the process.

Chief ministers of both Andhra Pradesh and Karnataka face criminal cases. Unfortunately, the same is true for the opposition leaders too. The top court bench had felt that the rule of law is under serious threat with people’s representatives being busy attending courts at the cost of governance.

Unfortunately, the major obstacle for Justice Ramana Bench’s order of speedy trial is high courts as they have granted numerous stays on investigations.

It is said that the Andhra Opposition leader, Chandrababu Naidu, has got around 21 stays on investigations against him, including a latest FIR for alleged wrongful alienation of lands allocated to SC/ST and weaker sections.

The bench of Justices NV Ramana, Surya Kant, and Hrishikesh Roy in September last year directed the chief justices of all high courts to decide within two months all cases where a stay had been granted in trials against sitting and former legislators. The bench gave them a year’s deadline to try and complete all criminal cases against them. The Supreme Court also asked the chief justices to designate a special bench, which included them as well, to monitor the progress of the trials.

The process of speedy trials started in 2017 when the Supreme Court ordered setting up of 12 special courts across the country. The court’s direction came in a PIL filed by BJP leader Ashwini Kumar Upadhyay who had demanded fast-tracking of criminal trials against tainted politicians and a life ban for those convicted.

It is not that all charged politicians are criminals; some of them are victims of political vendetta. An example was given by Indialegalive.com. It reported that former Haryana minister Sampat Singh, while welcoming the Supreme Court direction, said: “I have been a proponent of probity in public life and speedy trial of cases involving lawmakers. At the same time, I have also been a victim of political vendetta and prolonged trials….In 1985, I had prepared a memorandum against Chief Minister Bhajan Lal listing alleged acts of corruption involving him after strenuous and often risky efforts. The memorandum was signed by 100 MPs. Chaudhary Devi Lal and I along with many leaders presented the memorandum to Prime Minister Rajiv Gandhi who referred it to the Jaswant Singh Commission. However, Bhajan Lal returned to power, and on January 9, 1993, a case under the Prevention of Corruption Act was registered against me. Over 50 officers and 2,000 policemen were involved in raids that took place in 26 places. Thankfully, in March 2002, I was acquitted by the special court.”

In 2004, the complainant filed a revision petition in the Punjab and Haryana High Court; it was dismissed in 2010. Thus, it took 17 years for the case to be finally decided. “There is need for an effective mechanism to discourage registering criminal cases to settle scores,” Sampat said.

The trial, speedy or ordinary, will require the witness protection because influential leaders holding power can threaten the witnesses or eliminate them if they don’t fall in line.

In case of Swaran Singh vs State of Punjab, the Supreme Court observed: “A witness has to visit the court at his own cost. Nowadays it has become more or less fashionable to repeatedly adjourn a case. Eventually, the witness is tired and gives up.”

The SC further said: “While adjourning a case without any valid cause, a court unwittingly becomes party to miscarriage of justice. Most witnesses have to wait until their turn. And when the time for deposing or giving evidence comes, the lawyers examine and cross-examine them as if they themselves are the perpetrators of the crime.”

The Law Commission in many reports emphasized witness protection procedures. The Malimath Committee report also supported such efforts. But there was neither a specific program nor a proper response of states and high courts. The Law Commission’s 198th report on ‘Witness Identity Protection’ and ‘Witness Protection Programmes’ of 2006 was forwarded to states for inputs.

It is not enough if high courts respond to the Justice Ramana Bench directions. Unless state governments and political executives act promptly and sincerely, the speedy trial of the ‘prosecution’ that includes them will not be possible. The question is which Chief Minister would support speedy trial of criminal cases against him, and which opposition leader would want vacating stay against the investigation of charges.

As number two judge of the Supreme Court, Justice N V Ramana initiated the program of speedy trial. Six months are over. The people look forward to the implementation of the orders of this bench, which is under the direct supervision of the Chief Justice of India.