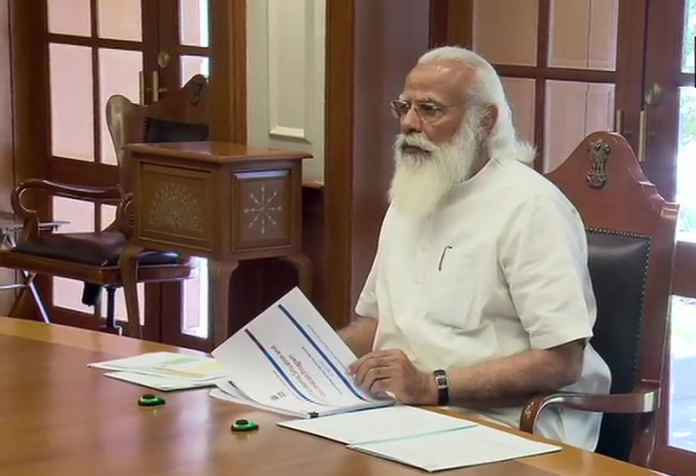 In Prime Minister Narendra Modi’s head, everyone must perform — all the time — toward a new India. But this is India. All is maya.

“A good friend will stab you in the front,” Oscar Wilde said. Last week, Bollywood veteran Anupam Kher, a staunch supporter of Prime Minister Narendra Modi, said the government should focus more on Covid management and less on ‘image building.’

In Delhi, for the first time since April 10, cases are falling. From a daily average of 10,000, it has come down to 8,500. The health infrastructure is still overloaded, and vaccines are in short supply, even as the cow continues to be furtively looked at as a potential producer of oxygen, suddenly the most elusive of gases. It is there, but it is not.

And there are, as in a Garbriel Garcia Marquez novel, dead bodies floating in the Ganga, a river so holy we can only desecrate it, no matter what we do.  Newspapers reported some 800 shallow graves had been found on the banks of the river, which in high tide would shift the bodies out into the waters. Some of them have since been dug up and the bodies cremated. Yet we only narrowly missed the Moon, and have got a rocket on its way to Mars.

All that can happen to a man or a woman has more of a chance of happening in Unnao — rape, murder, free-speech ban. Perhaps Uttar Pradesh Chief Minister Yogi Adityanath is conducting an experiment there on human endurance. Humans tend to do a great deal without quite knowing it.

The alcoholic character Mike Campbell, in Ernest Hemingway’s The Sun Also Rises, when asked how he went bankrupt, says: “Gradually and then suddenly.”

Nothing has changed so gradually and so suddenly as Modi himself. It could not be dementia, could it? It could happen to the best among us. This writer suspects he himself is already suffering from it occasionally.

On Friday, the PM’s transformation from a seemingly ruthless and goal-oriented CEO to an embodiment of empathy was complete as he released ₹19,000 crore (just ₹1,000 crore less than the estimated cost of the Central Vista project) to farmers via a video conference.

“The pain that the countrymen have endured, the pain that many people have gone through, I feel the same pain. Being your Pradhan Sevak, I share your sentiment,” he said. He didn’t look pained at all.

Why does one feel like being the good friend, and reach for the steel? Could it be because the PM’s most intimate words, of personal sympathy and fellow feeling, still need at least a football-ground of people?  Nothing that the PM says is meant for personal communication, perhaps.

The Prime Minister’s strength and weakness is that he sees problems and solutions in statistics. He understands the individual only vaguely, like an abstract — out of focus, out of shape. There is for him only a one-billion-strong mass.  One followed by so many zeroes. Take that one away, and what are we left with?

Think of what Stalin said in the context of World War II: “The death of one man is a tragedy. The death of millions is a statistic.”

It is a power-trap to see things compulsively in numbers. Many successful executives of large companies have this talent, in which a number replaces a face.

The kisans who appeared on the video rose to the occasion, explaining how they fared. It was like they had all become chief executives.  Modi congratulated them. Perform more, he said, and he always says it with good intention. How can performance be bad?

In the PM’s head, everyone must perform — all the time — toward a new India. Everyone is always straining forward, the way they are seen to do in the public sculptures in Soviet Russia: giant workers with prodigious muscles dragging some reluctant and invisible burden forward.  No one is allowed to fail. One goes down, all go down.

But this is India. All is maya, including the CoWin app which rarely works: try getting a vaccine slot using it. Long back, when this writer was yet a college student, he met novelist OV Vijayan at his Defence Colony apartment in Delhi, who said his idea of a peaceful India was one where each sat quietly under his backyard banyan tree and smoked up.

With an idealism that was already cracking up, this writer stuttered, but shouldn’t we be successful out there in the world? It’s all the same, Vijayan said, looking down at his frail feet, like a Zen teacher. It is so much peace, he said a moment later, not winning.

According to reports, more vaccines are on their way. A nasal spray that can kill the virus is expected to hit the market; and a tablet, not preventive, but curative, is likely to arrive in the shops in a few days. What a thing is a man! By around June-end, there would be a flattening of the curve.

It would have come too late. Some of us may not live to see that time though it is only weeks away. And even fewer are likely to see August 15 next year, when India turns 75, and a new Raj Path — now under manic reconstruction — will be on display, an ultimate image-building exercise, notwithstanding Kher.

On that day those still alive will hear the Prime Minister exhort the nation, having survived a kind of natural pogrom of the weak and the old, a new India, one that resumes its march, toward a strong and powerful future out to teach the world a lesson.

So be it. If winning is important, it still makes sense to remember victory is at the expense of those who failed — to stay at rest even in their graves in Unnao.

(CP Surendran’s novel, ‘One Life, and the Many Lives of Osip B’, is slated for release later this year).

(The Federal seeks to present views and opinions from all sides of the spectrum. The information, ideas or opinions in the articles are of the author and do not necessarily reflect the views of The Federal).