The Narendra Modi government is keen to have simultaneous elections to the Lok Sabha and all the state assemblies. But, the proposal needs an informed debate on its pros and cons before the government takes the idea further.

The idea of One Nation One Election (ONOE), simultaneous elections, was first made in the annual report of the Election Commission in 1983, and referred to by the Law Commission in 1999. After Prime Minister Narendra Modi reiterated this proposal in 2014, the Niti Aayog prepared a working paper in January 2017. Meanwhile, the Law Commission in its recommendations identified several problems and concluded that at least five Constitutional inputs would be needed.

The Law Commission under various regimes at the Centre has been endorsing the idea of ONOE on two counts — to reduce election expenditure and promote efficiency in governance, which is affected due to imposition of the Model Code of Conduct for long periods. 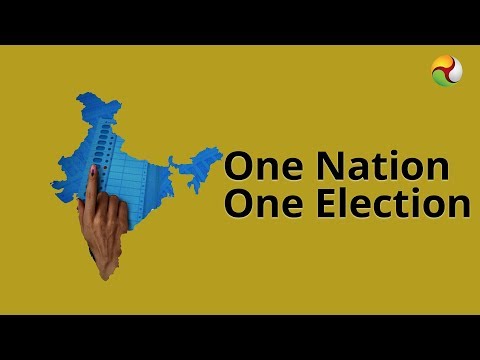 Main opposition to the idea of simultaneous polls to Parliament and Assemblies has come from CPI, CPM, DMK and some regional parties on the ground of federalism. The CPM has informed the Law Commission that holding the Lok Sabha and Assembly polls together is inherently “anti-democratic” and negates the principles of federalism, which is a fundamental feature of the Constitution.

Party general secretary Sitaram Yechury, in his letter to the Commission, listed the party’s objections to the proposal. He said it goes beyond the ambit of law reform entailing major amendments to the Constitution and runs against both the “letter and spirit of our Constitution”.

Read: One Nation, One Election will create confusion among voters: Deve Gowda

The CPI has described the move as “unrealistic”. Party leader D Raja has said that, “Simultaneous polls are not feasible as the central government cannot force all state governments to go for polls during Lok Sabha elections”. He has charged the ECI of “toeing the BJP line”.

J Jayalalithaa, the former general secretary of AIADMK had approved of ONOE with some riders such as a guaranteed fixed term. The present EPS government has said it cannot be taken up in the immediate future.

A year ago, DMK in a letter to the Law Commission firmly opposed simultaneous polls stating that it goes against the “basic tenets of our constitution and established principles of democratic functioning”. The party termed the Law Commission’s proposal “a complete misadventure that will decimate the federal structure.”

Responding to April 17, 2018 Law Commission’s Working Paper the DMK said, “State Legislatures have a distinct constitutional identity and derive their powers from Chapter III of the Constitution. Though Parliament is empowered to amend the Constitution – in accordance with Article 368 – there are basic features of the Constitution which cannot be abrogated.”

Party leader M K Stalin had said that Federalism was one such basic feature and this has been repeatedly held by the Supreme Court.

Further, the powers to dissolve the Legislature were vested with the Governor and the President under relevant articles of the Constitution, and these powers have been “circumscribed” by a seven-judge bench of the apex court in 1977.

“Any alteration of these powers by the Union Government or Election Commission of India may run the risk of altering the basic structure of the Constitution and directly impinging on its federal character,” Stalin said.

On the possibility of synchronising Assembly polls with 2019 and 2024 Lok Sabha elections, the DMK leader said the panel’s Working Paper had apparently not considered that Lok Sabha is also capable of being dissolved before its five-year term.

“If such a situation were to happen, it is unclear whether all Legislative Assemblies will also be dissolved to synchronise electoral process again,” Stalin said.

A recent study published by IDFC institute has concluded that “on an average, there is a 77 per cent chance that the Indian voter will vote for the same party for both the State and Centre when elections are held simultaneously”.

The authors of this study analyzed electoral data for four rounds of Lok Sabha elections –1999, 2004, 2009 and 2014. They chose states whose elections coincided with the above elections and noted that “trend of choosing the same party has gone from 68 per cent in 1999 to 77 per cent in 2004 to 76 per cent in 2009 and 86 per cent in 2014” implying that “the ability or willingness of the voter to vote differently is only decreasing with time”.

Also read: One nation, one election sounds attractive but not possible: Ex-CEC

Another article published by Prof. Sanjay Kumar and Prof. Jagdeep Chhokar states that “If we consider elections from the 1989 general election onwards, there have been 31 instances of holding simultaneous elections for State Assemblies and the Lok Sabha in different States… In 24 elections the major political parties polled almost a similar proportion of votes both for the Assembly and the Lok Sabha, while only in seven instances was the choice of voters somewhat different.

However, the NITI Aayog study says there is no danger to federalism if there were simultaneous polls. It rejected the above objections saying that elections to large states such as Maharashtra and Karnataka were not simultaneous. The elections to Andhra Pradesh and Telangana were held simultaneously in 2014. There was no evidence to support criticism of simultaneous polls, it concluded.

The Niti Ayog paper states that voting is a complex phenomenon and is driven by a gamut of factors such as –incumbency, anti-incumbency of governments, organizational strengths, presence of alternate political options in a state, voters’ perception of key leaders and candidates in assembly/ Parliamentary constituencies, political parties’ stand on various state/ national issues, political alliances and so on. To add to these, there were “social aspects such as caste, religion, local community dynamics, voter bribery etc.”

“To sum it up, correlating a particular parameter (simultaneous timing of elections) to explain election results would be over-simplifying the complexity of voting behaviours and undermining the maturing of Indian electorate as well. Together the above arguments clearly indicate that there is no strong basis to conclude that simultaneous elections should not be considered,” the paper concluded.

(The writer is a senior journalist based in Chennai)