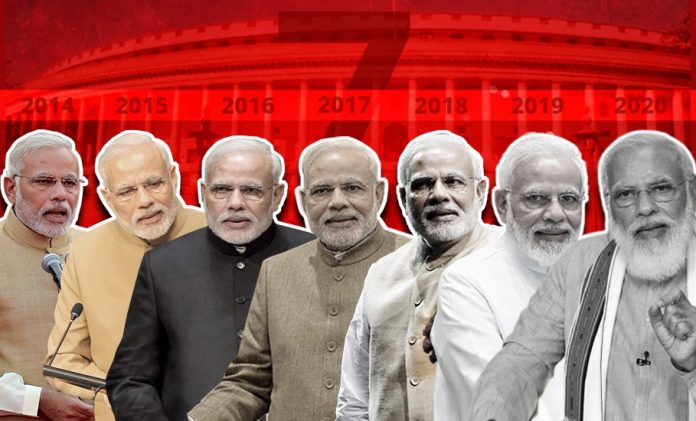 Modi would have been spared public anger if the expectation from him was not so elevated.

(This is the first in a series of articles wherein The Federal will examine seven years of Modi government. The articles will cover a wide range of topics like economy, demonetisation, COVID lockdown, and livelihood)

The Seven Year Itch is a 1955 Hollywood romantic comedy most famously starring Marilyn Monroe. Besides the titular phrase, the film has immense recall capacity for the iconic photograph of the actor amusingly restraining her ‘flying skirt’ down, when a gust from the subway vent blew it up moments after she stepped out of a movie theatre with her date. The film’s title was drawn from the popular belief, legitimised by several psychologists, that there is often a decline in the quality of marital life after seven years of wedlock.

Some phrases, often used to describe the extent of marital harmony or its absence, are often used in political analysis too, ‘honeymoon period’ for instance. When used in the context of a couple’s marital relationship, this refers to the period when married individuals are willing to overlook everything and see no faults in the partner. Likewise in politics. It has been observed that people, in the immediate aftermath of electing a leader to office, respond to every decision uncritically, that is when most unpalatable decisions are best taken.

It is Prime Minister Narendra Modi’s misfortune that he faces the gravest of the political and administrative challenge of his career while on the cusp of completing seven years in office. Given the perceptible public anger over government ineptitude, indifference and negligence while tackling the most serious health and economic challenge that Indians have collectively faced in a century, it is apt to ask if the reverse countdown for this regime has quietly begun.

Or would he succeed in holding on to his electoral modesty with a verdict in 2024 that may not be to his complete satisfaction?

Modi’s is not in an enviable position. Since March 2020, after belatedly realising that the threat from coronavirus was real and not a scare triggered by forces inimical to India, Modi has perforce trudged on an unknown path against an adversary whose behavioural trajectory is known to none. He made his situation worse by continuing to showcase himself as the all-conquering ‘superman’.

Modi would have been spared public anger if the expectation from him was not so elevated. Due to the primacy this regime gives to securing votes in election after election, Modi’s persona was placed on a pedestal and he was projected as a demigod. He failed to live up to the meticulously constructed belief that everything was attainable if he was in saddle – the slogan, ‘Modi hai to mumkin hai’, was precisely this promise.

There are occasions in history when empirical evidence is not required to comprehend that the bandwagon has derailed. In this instance, however, in addition to the sense of gross erosion of trust and belief in Modi, there is even one, in fact two to be precise, data sets. Separate surveys, one by the US data intelligence company, Morning Consult, and the other by the Indian opinion tracker, CVoter, reached the same conclusion – Modi’s approval ratings have fallen to an unprecedented low.

The data from these surveys are backed by-election results of West Bengal. Despite repeated claims of Modi’s chief aide, Home Minister Amit Shah, the BJP not just failed to secure majority, but also fell short of the psychological mark of a hundred seats. The verdict was a big snub to Modi. He after all, invested unprecedented time and energy in trying to win elections when he needed to prioritise strategies to anticipate and counter the catastrophic second phase of the pandemic.

The prime minister’s supporters juxtapose this inadequate showing with the BJP tally of six seats in the outgoing assembly. Instead, the latest performance needs to be placed against the 2019 verdict when the BJP established leadings in 120-plus assembly segments and secured a vote share in excess of 40 per cent. 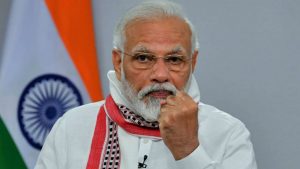 The BJP’s emergence in Bengal needs to be analysed over every poll since 2011 when the party started with zero seats in its bag and vote share of just 4.14 per cent. The BJP’s rise in Bengal is solely due to the Modi-factor and not because of popular regional leaders, the state unit remains divided and banks on trapeze specialists from other parties.

Failure of Modi to remain the ascendant star in West Bengal being the result of growing bitterness towards him, also found reflection in Mohan Bhagwat’s uncharacteristic criticism of the government although he balanced this by naming the people as also being responsible for the spike in the pandemic.

Those who do not learn from history are condemned to repeat it. This truism should haunt Modi for failing to keep in mind that the UPA regime’s tailspin too started when it was on the verge of completing seven years in office. After assuming office in 2004, the Manmohan Singh regime also secured an enhanced mandate in 2009, although the Congress tally of 206 was almost a 100 less than the BJP’s in 2019 – but electoral numbers must be framed against political contexts.

Till the India Against Corruption agitation started rocking the UPA boat, the UPA government had, like Modi has, weathered a political storm or two. But the tipping point for cumulative anti-incumbent sentiment to add up against the regime was reached at almost the same point that Modi is now.

It is pertinent to recall that people first decided to vote out UPA. It was only subsequently that they got the option of getting Modi in, the verdict would have been the same, possibly less emphatic, if he had not been BJP’s mascot.

True, this is not the first time that Modi faced an electoral challenge — in 2017 he barely carved out a victory in Gujarat and a year later lost a series of crucial by-polls in 2018 besides the states of Madhya Pradesh, Rajasthan and Chhattisgarh. The setbacks were collectively the result of the government’s failure to enable people stage recovery from demonetisation-induced financial setbacks.

By early 2019, it was clear that the narrative had been seized by the Congress when the party announced cash doles under a proposed Nyuntam Aay Yojana if elected to power, an idea which Modi immediately implemented as his own in the last pre-poll budget. The political discourse, however, was fundamentally altered after the unforeseen and unfortunate terrorist strike in Pulwama, thereafter Modi sprinted to a runaway victory.

If the warning bell has been rung a year earlier in this tenure and not in the fourth year as in his first term, he also faces a greater challenge. In his previous tenure, disenchantment with Modi, barring among ideological critics, was over incapacity to reignite the economy and give people more jobs and add to their purchasing power. Yet, he successfully communicated that actions like demonetisation were taken for ‘common good’ – fighting corruption.

This time, Modi does not have the cushion of having (not) acted for public benefit. The seething anger now is also not against his politics, as the anti-CAA stir was, but because of his inability to demonstrate competence in governance, an attribute which was undoubtedly over-estimated.

The virus planted a mortal kiss across social identities, economic classes and ideologies in rural, small-town and big-city India. Everywhere, ‘connections’ were useless. In 2016, worthless currency notes were either exchanged in banks by paid proxies standing hours in queues, or through the backdoor. This time, people had no option but to personally gasp with family and friends in tow, for oxygen cylinders and hospital beds – only in rarest of rare cases could ‘networks’ swing their way these life-saving essentials.

Since 1989, when the BJP emerged as a political force to reckon with, the party’s worst performance was in 2009 when its seats in Lok Sabha slid to 116 and a vote share of 18.8 per cent. This can be considered the party’s core vote bank, drawn mainly from its predominantly trader and upper-caste social supporters, besides the unflinching backers of the Hindutva ideology.

The decline in support that Modi is staring at, is in both sections – traditional supporters and those drawn by the magical spell he wove. It is too early to quantify the extent of erosion in backing. But when numbers start falling, there is no knowing where these stop. No one expected the Congress tally to drop to 44 in 2014.

Modi, however, has three years to mend his edifice. But, a significantly improved performance in henceforth tackling the pandemic is hindered by an unpredictable virus and scanty groundwork done so far.

There is also compelling need to prevent social unrest and lawlessness as a failing economy and personal penury looms on the horizon. There is the additional burden of running a regime of ‘yes-men’, personally handpicked by him and having no courage to show him the mirror whenever required.

There is of course, the gnawing sense that when everything fails, political leaders often fall back on tried and tested formulae. In Modi’s case, the temptation would be resort to religious polarisation. But repeating a game all too often, enables both adversaries and spectators to see through the moves. Hopefully.