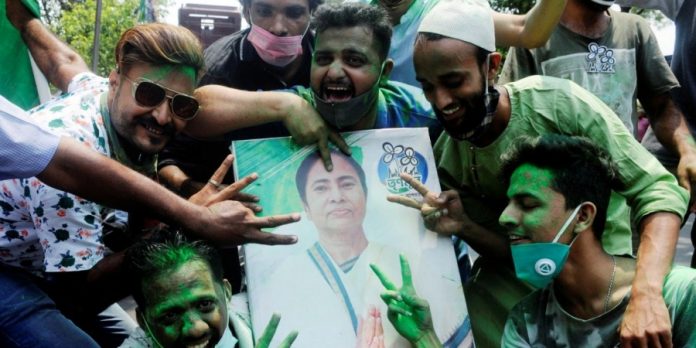 Mythology could be a good crystal ball for an era where politicians are more myth than reality. And, where else to begin except in West Bengal, where the election had blurred the lines between mythology and politics with competing chants of Jai Shri Ram and chants of Chandi.

So, as the legend goes, all the gods and minor deities once became helpless in dealing with an adversary who had been blessed with conditional immortality by Lord Brahma. Since the adversary, half buffalo-half human, could only be vanquished by a female, the gods created a powerful female form with ten arms and gave her a copy of their weapons. This female form, Durga, slayed the seemingly immortal and invincible opponent.

Mythology can’t be applied to life literally. But, with the disclaimer that in politics nobody is a goddess and nobody is a demon, it can be a good parable for politics, as it stood at the starting point of the Bengal elections.

Also read: Sharp rhetoric to tall claims: What went wrong for the BJP in Bengal

On the one side of the battle for Bengal was a seemingly invincible army of Prime Minister Narendra Modi, armed with money, men and a media, bolstered by the presence of pliant institutions on its flanks. When the battle started, the BJP’s victory looked all but inevitable destiny. Yet, a lone woman, riding a wheelchair, not a lion, humiliated and defeated this rampaging force blessed with electoral immortality.

The question now is: can this victory — the electoral push-back to Modi — be replicated? Has Mamata Banerjee set a template that can be followed across India to repulse the BJP’s marauding army that converges on every state that goes to polls?

This crystal gazing warrants we first understand why the BJP lost a state it seemed on the verge of putting in its basket. One reason is that the BJP started with a deficit of a third of votes. Its divisive agenda had ensured that Mamata Banerjee had the support of the 28-32 Muslims the BJP alienated by demonising the minorities as anti-national. With a third of vote already out of its grasp, it was left with the task of pocketing a majority of the Hindu vote. In contrast, Mamata had to attract just about a third of the remaining 70 per cent voters.

The BJP’s 37% vote share shows its ploy of polarizing Hindus didn’t work. A back of the envelope calculation reveals the Hindu vote was divided roughly 50-50 between the BJP and the opposition (including the Left-Congress combine). This was, as Prashant Kishore argued on NDTV, in sync with the historical arc of polarisation, which, he said, doesn’t brainwash more than 50-55 per cent of a community.

The remainder of India may not offer the opposition the luxury of starting with nearly 30 per cent voters demonised by the BJP. But, the Bengal election certainly breaks the myth of a consolidated Hindu vote. Within the majority is a large mass of people who are liberal, secular and, perhaps, critical of the BJP’s policies. The opposition will have to convince this section of Hindus to vote for it in subsequent elections.

Mamata has already shown how to do this — by talking of an inclusive India, a country for all, and governance for all. She conveyed her secular, liberal credentials without being apologetic of her cultural and religious identity. But, the key difference between the BJP and Mamata was that she didn’t use her religion as a scythe, a weapon to divide the electorate. Her Chandi path was, unlike Jai Shree Ram, not a war cry but a rejoinder to the BJP’s campaign branding her anti-Hindu.

Recall that a similar strategy of creating an umbrella coalition of secular, liberal Hindus with the minorities has worked also for Arvind Kejriwal. In the middle of Delhi election, Kejriwal had suddenly morphed into a Hanuman bhakt to counter the BJP. In principle, the amalgamation of religious identity and politics may be wrong, but then how do you deal with an adversary that talks of nothing except religion? So, going forward the opposition will have to embrace their socio-cultural identity without being skittish about it.

If Hindutva is poison, unlike Shiva or Socrates, you don’t have to gulp it. Because, India’s liberal, syncretic and secular ethos can effectively neutralise it.

Skeptics may wonder why this strategy has not worked in the past for the Congress. Rahul Gandhi, after all, was among the early practitioners of this identity politics with his so-called temple runs and reminders of his janeu (sacred thread) defined Brahmanism.

The answer, again, is to be gleaned from the Bengal results. Mamata has shown that you can’t defeat Modi unless your stature is equal to him and if the election is not a presidential shootout between two clear choices. The Congress has failed so far because Rahul Gandhi has always come across as inferior to Modi. He has failed to raise himself to the heavyweight category to earn the right to enter the same ring as Modi.

The problem with the opposition is that the Congress, as the Ajit joke goes, is like liquid oxygen for it. The opposition can’t do without it as regional leaders like Mamata can’t contest in the Hindi heartland. But the Congress is also the singular reason behind the opposition’s demise in national elections. This conundrum has to be sorted out. Perhaps, the Congress can roll the red carpet for Mamata, and ask her to lead the party which was once her kindergarten.

The good news for the opposition is that Bengal has pushed Modi back at a time when the nation is revisiting the PM’s legacy. Modi’s image of man of action has been tarnished by his inept handling of the corona pandemic. As Indians struggle for medicines, hospital beds, oxygen cylinders and cremation grounds, there is collective realisation of Modi’s failures.

Success, it is said, is a result of time, place and effort. At the moment, Modi is at his most vulnerable. The place of the next election would be Uttar Pradesh, where chief minister Ajay Mohan Bisht (Yogi Adityanath) has not only come across as incompetent, but also ruthless. The iron, as they say, is hot. With the right effort, the opposition can wrest UP from the BJP. But where is the Durga to take on a formidable adversary?