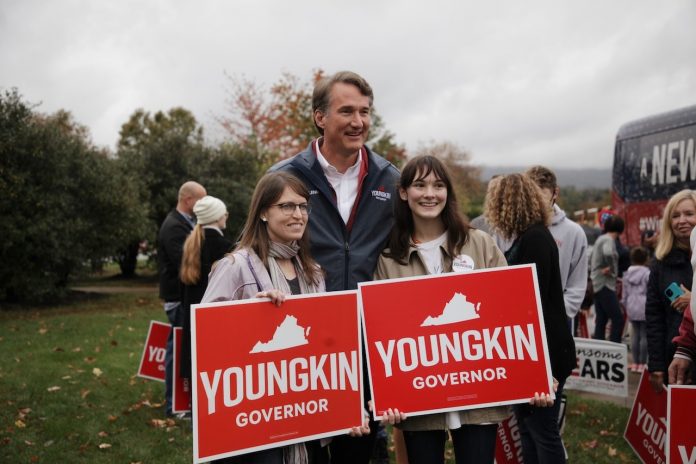 The politically untested Republican, Glenn Youngkin, who was in the private sector as a CEO managed to pull off the victory campaigning hard for 'local' issues. Pic: Twitter

The Democrats and President Joseph Biden will be waking up to a bitter cup of coffee on Wednesday (November 3) morning. Their defeat in the Virginia Governor’s race was something that neither Democrats nor the Biden White House seriously expected; if anything there was this glimmer of hope that Virginians would bring Terry McAuliffe back in office. In fact, this confidence was expressed by President Biden even as he was returning from the Climate Summit in Glasgow, only to discover to his dismay that people in the neighboring state of Washington DC had other ideas.

The Grand Old Party has put one of its own in the Governor’s Mansion after more than a decade and in the process bidding farewell to one of longtime Democratic operatives.

The race was undoubtedly tightening in the final stages and in the end some clever campaigning by Glenn Youngkin paid rich dividends. In normal times, the loss of Virginia would have gone down as nothing out of the ordinary considering the ups and downs in politics.

But both Republicans and Democrats know that these are not ordinary times in politics and for different reasons: the Grand Old Party, with or without Donald Trump, is keen on wresting the House of Representatives and Senate from the Democrats in the mid-term elections of 2022; and Democrats wish to give some finality to their grip on legislative power hoping to consolidate their position in the same two chambers.

Virginia is a state that Hillary Clinton won in 2016 by five points; and Joe Biden doubled it to ten points in 2020; but in a span of some eleven months it is undoubtedly a rude awakening to the Democrats in spite of pulling in all the big guns to campaign for McAuliffe. The politically untested Youngkin who was in the private sector as a CEO managed to pull it off by cleverly using the Trump machine and at the same time convincing voters that he is not a part of the old song and dance of whacko conspiracy theories of the 2020 elections. And Youngkin had his way in spite of last minute Democratic efforts to pin him down closely with the former Republican President and his cohorts.

Also read: Political right in the US and its idea of Biden-Harris rift

What really stumped the Democrats in Virginia was that Youngkin essentially took a leaf out of the notebook of former Democratic Speaker of the House of Representatives Tip O’Neill, who in 1982 coined the phrase “all politics is local”, a theme and words that have been traced back to the 1930s.

The Republican challenger was not focused on the larger issues of what divided the GOP and Democrats but in the later stages of campaigning started talking about the rights of parents to know what their children learn in schools. The issue of parents or the school boards boiled down to a vigorous debate on whether schools should teach critical race theory and rights of transgenders in classrooms. And in the end, Youngkin hammered away at the Loudon County School Board on its investigation of two sexual assaults in schools.

Whether Biden and the Democrats admit it or not, the Virginia verdict has national implications for the mid-term elections of 2022 and the Presidential polls of 2024, irrespective of the candidates in the fray. Even the Republicans who were reluctant to stand by Youngkin in Virginia will be tempted to jump into the victory bandwagon; and former President Trump will assert bragging rights over Youngkin’s win. Even though the new Governor had been careful not to throw in his lot with Trump, only going to the extent of saying that he was “honoured” for the support but not associating himself with rallies thrown by ardent supporters of the 45th President.

Also read: Virginia Battle: Why both Democrats and Republicans are not excited

Undoubtedly, Youngkin’s victory energises the hardcore Trump followers who will most certainly see the hand of the former President in this victory and will try to keep the momentum going for next fall’s elections. Keeping alive the worn-out and discredited theories of 2020 Presidential elections are coming at a time when sober Republicans were hoping to steer the party away from the troubled twelve months and in the process negate the effects of Trump and so-called Trumpism.

Seen in this perspective the results of Virginia have kept alive the chances of Trump trying his hands at the Presidency in 2024. Trump will not only go to town on his popularity and Republicans will trip over one another trying to get his support that not only comes with his numbers but also with the dollar sign behind it by way of campaign donations.

The Virginia loss is a double whammy for the Biden White House as it is struggling to get its legislative agenda through the House and the Senate. In fact, the outcome in Virginia is an eye-opener more to the Democrats than to Republicans and it comes at a time when President Biden literally needs every single Democrat to be solidly lined up behind him. Moreover, Democrats in the state of Virginia, especially Senator Joe Manchin, are going to be carefully watching funding for climate change to ensure that nothing is taken away from this coal rich state. And, for the small handful of Republicans who have crossed the aisle on rare occasions, it is a time to re-think.

The writer was a former senior journalist based in Washington DC for about 15 years
covering North America and the United Nations.