A typical Bollywood film till the 80s had a typical hospital scene. After keeping a person on life-support equipment for a few days, a sombre looking doctor would come out and announce: the mareez (patient) needs dua (prayers) more than dawa (medicine). Cut to scenes of an Amitabh Bachchan or Rajesh Khanna seeking the blessings of Medina (Coolie) or Mata Rani of Vaishno Devi (Avtaar).

The bad news at the beginning of the fourth round of lockdown in India is similar. The doctors have given up hope and announced the country now needs dua more than dawa. In short, the country is now at the mercy of its destiny.

So, why is it time to seek the power of divine blessings? The simple answer: the lockdown has failed in its primary objective. And now that Modis and Kejriwals have realised there isn’t much they can do, it is time for the Bachchans and the Khannas of India to start praying.

India’s lockdown restrictions are being gradually eased after two months of draconian measures. The scenes in the streets are that of life getting back to normal — you can see vehicular traffic going up, shops opening up, and people walking around with their faces hidden behind cheap masks or kerchiefs wrapped around their face. But, the problem with the stand-at-ease order is that India is opening up when the infections are peaking. From the 400-odd confirmed patients at the beginning of the lockdown, the numbers are now in excess of one lakh. Instead of squashing the sombrero, as Boris Johnson said, India is opening up when infections are growing by thousands every week.

In comparison, China opened the country only when the infections had hit zero. In fact, Wuhan — the epicentre of the pandemic — stayed under a strict lockdown for several days even after the sombrero had been smashed. Similalrly, London, Paris, Madrid, and Rome are easing restrictions with the infection rate at the lowest since the beginning of the pandemic. India, unfortunately, is doing the exact opposite.

There is compelling evidence that the virus may be entrenched deep in India. On Tuesday, Bihar reported that every fourth migrant who had returned from Delhi tested positive for coronavirus. A few days ago, Punjab tested 137 pilgrims who had returned from Maharashtra’s Nanded positive for the virus. In all likelihood, hundreds of asymptomatic patients waiting to be diagnosed are spreading the disease into the community.

A report in the Indian Express suggests the two months of lockdown have helped India buy three weeks of time. On March 29, the number of infections had reached 1,000. From there to 10,000 took another 15 days, and at that rate, India seemed headed towards 100,000 cases by the end of April, if the disease was allowed to spread exponentially, entirely unchecked. But the numbers stayed around 35,000 and hit six figures only on May 18.

Yet, India had no other option but to open up.

When the pandemic began, the hope within the establishment was that the virus would disappear or weaken with time. Back then, the lockdown appeared to be a temporary measure for flattening the curve of the disease till a treatment was found or the summer heat acted as a deterrent for the virus. This hope for a serendipitous escape from the virus has now crashed.

What has crashed, instead, is the economy. With Indian economy coming to a standstill, demand and production both have been destroyed. A good indicator of the impact of the lockdown is the number of new vehicles sold by Maruti during the first four weeks of the shutdown — it was zero. Before the lockdown began, Indian economy was suffering because of a steep fall in consumption, leading to eight quarters of fall in the GDP. The lockdown has added another dimension to this slowdown — a fall in production. So, now India n economy is being squeezed from two directions — the demand and supply sides.

This squeeze has led to dire predictions for the future of Indian GDP. Some analysts now predict the economy would contract by 50 per cent in the April-June quarter and, as a result, the annual growth could be negative. To keep the economy from tanking further, India has to open up, even at the risk of letting the pandemic get out of hand.

On May 16, the number of new cases was 3,970. Two days later it had gone up by 30 percent to 5,242. At this rate, the doubling rate could again go back to where it was at the beginning of the lockdown and India would hit a million reported cases by the middle of June. Once that happens, we’d be on a dangerous spiral of growth where the only hope would be prayers. The lockdown, as we’d soon realise unless there is a miraculous slowdown, has been a complete failure. The botched up implementation, the stop-start-stop interventions on travel, the inability to ensure everyone is sheltered in a safe place with enough food, and the low levels of testing have defeated the basic purpose of the lockdown — of opening up when new cases are at the lowest. 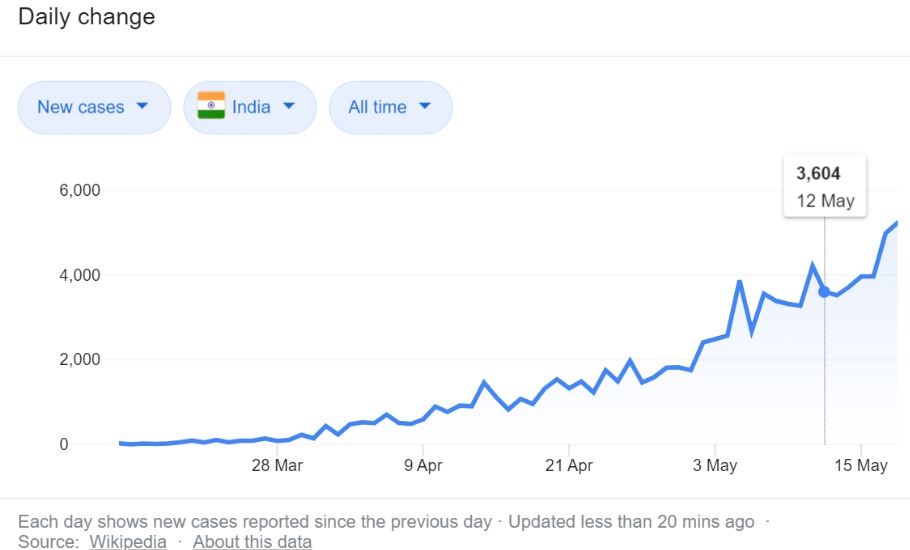 The other objective of the lockdown should have been to prepare our healthcare system for a sudden spike in the number of patients. In Maharashtra, with the virus yet to peak, hospitals are already running out of beds. In other states, a similar breakdown may not be too far away. We will soon find out if India is ready for a life beyond lockdown.

Related news: Lockdown for the good of people not a weapon of impunity

The only achievement of the lockdown is the increased awareness among people about the gravity of the pandemic. Most Indians are now taking precautions to ensure the virus doesn’t hit them — they are stepping out with masks, avoiding unnecessary travel and staying away from public places. But, a densely populated country eager to restart the economy these safeguards may not be enough.

Opening up the country is the bitter pill we will have to swallow for the health of the economy. And, as far as our health is concerned, we can all start practicing those filmy bhajans.