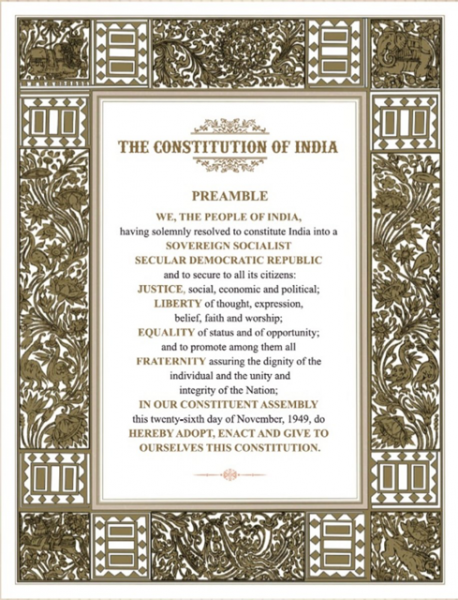 The Preamble declares that Liberty, Equality and Fraternity are sacred to all of us.

November 26 has for a while been recognised as Law Day, or Constitution Day, but it used to pass by without much recognition, except for some celebrations by bar associations and law colleges. However, the Preamble of the Constitution has assumed great importance and relevance in recent times due to the unconstitutional measures of the governments, and people have started reciting it as a symbol of protest.

Since 2020, public readings of the Preamble, besides being a popular form of protest, are a reminder to the government to adhere to the principles enshrined in the Constitution. Scores of protests and programmes to resist the Citizenship Amendment Act (CAA) have been marked by protesters holding up copies of the Constitution and by public readings of the Preamble. That way the Preamble has transformed from plain text to a socially dynamic statement.

The objective behind reading the preamble is to “instil confidence among crores of people across India that our country is secular and a democratic republic”. The Constitution does not allow anyone, including the government, to divide or distinguish its citizens on the basis of religion. The new CAA grants Indian citizenship to Hindus, Christians, Sikhs, Buddhists, Parsis and Jain refugees from Pakistan, Afghanistan and Bangladesh, who entered India on or before December 31, 2014. The Act, when combined with the NRC (National Register of Citizens), becomes a complex problem.

Thus, over the past couple of years, people have begun to take the Preamble seriously and celebrate Constitution Day. The recitation of the Preamble has become a significant tool of agitation against anti-constitutional policies. The police have resisted Preamble recitation, terming it ‘provocation for violence’.

Reciting the Preamble is not a crime

When Dalit leader Chandrasekhar Azad protested against the CAA in 2020 by reading the Preamble and flashing copies of the Constitution, Delhi police slapped several criminal cases on him. The bail petition reached a Delhi court, which told city Delhi police and prosecution that reciting the Preamble of the Constitution in a public place is not a crime.

“In the colonial era the protests were out on the roads. But your protest can be legal, inside the courts,” she further said. “Inside Parliament, things which should have been said were not said and that is why people are out on the streets. We have the full right to express our views but we cannot destroy our country.”

Also read: Three States and their endeavour to keep GOs out of public domain

She went on to state that during the Colonial Era, when the British followed the policy of ‘divide and rule’, Ravindra Nath Tagore had visualised a nation where there is no fear in the minds of the people, and education and enlightenment are attained by all. She then quoted from Tagore’s poem, Where the Mind is Without Fear.

The Centre has now realised the ‘potential’ of the Preamble and started campaigning for it. Amid the ongoing Azadi ka Amrit Mahotsav event being organised across the country to celebrate the 75th year of Independence, the Centre has directed all the ministries and departments to “put up a Preamble wall in their office premises and submit their action-taken report to the (concerned) ministry “.

In fact, the celebration of Constitution Day was started in 2015 by Prime Minister Narendra Modi, at the Central Hall of Parliament. On November 26, 2020, then Union Minister Prakash Javadekar inaugurated the Preamble wall at the premises of the Ministry of Environment, Forest and Climate Change.  The same year, the Department for Promotion of Industry and Internal Trade, as well as the Department of Personnel and Training, and several other ministries also unveiled Preamble walls.

This day last year, President Ram Nath Kovind led the nation in community reading of the Preamble of the Constitution, organised by the Union Ministry of Social Justice and Empowerment.  The Opposition joined in in the celebration. Paying rich tributes to Dr BR Ambedkar on his 129th birth anniversary, Congress leader Priyanka Gandhi said Dr Ambedkar had a major role to play in the building of India.

Reading the Preamble in schools

The Maharashtra government recognised that the Constitution is at the heart of the nationwide protest over the CAA, as it is widely believed that the new amendment goes against the Constitution and its promise of equality of all religions. The State government made it a must to read the Preamble in all schools, through a directive.

Similarly, the Madhya Pradesh government mandated its recital in morning assembly prayers. Kerala, on January 8, 2020, has also proposed to make the reading of the Preamble a part of assembly sessions in schools and colleges, to create awareness regarding the importance of protecting the Constitution.

Interestingly, when the State directive to hold group readings of the Preamble was announced in 2013, it had faced resistance and ridicule from civil society members and activists, who called it ‘lip-service’ and ‘tokenism’ by the government, instead of taking efforts to ensure that rights such as ‘freedom of expression’ of citizens were safeguarded.

What is the Preamble?

The Preamble declares that Liberty, Equality and Fraternity are sacred to all of us. It acts as a constant reminder to lawmakers and policy makers while formulating legislation and public policies. It is considered as critical to open the minds of the lawmakers as it is to the mischiefs which are to be remedied and the objects which are to be accomplished. It embodies solus populi supreme lex, which means the good of the mass of citizens is the supreme law.

The Preamble puts forth the four objectives of justice, social, economic and political, by means of which the people of India constitute ‘a Sovereign Democratic Republic’. People must be free to speak for their rights and that must be fulfilled, as guaranteed by the Constitution.

Wesley Newcomb Hohfeld, an American jurist, said the term ‘rights’ must be confined to only that which exists corresponding to a duty. The Preamble lists out those rights and thus is called Charter of Rights. Constitutional law scholar Gautam Bhatia has argued that the Preamble’s “declarations of universal justice, of equality, and of fraternity, […]  speaks to us of the kind of country that we aspire to be.” Encapsulating our constitutional values, it becomes the shortest charter of rights for our nation of 1.3 billion people.

Five constitutional points – on being liberal

The Preamble aligns well with Gandhian principles. In her book Why I am a Liberal, Sagarika Ghose gives five arguments as to why Mahatma Gandhi was the greatest Indian liberal:

The Preamble is a social contract between the citizens of India. We can defend the Preamble’s values and principles which seek to create a compassionate, rational, and liberal Indian citizen. Our nation and people are still divided on religion and caste. They may not disappear suddenly. But if everyone understands the meaning of the Preamble, it can spur a social movement towards transforming us into good citizens.