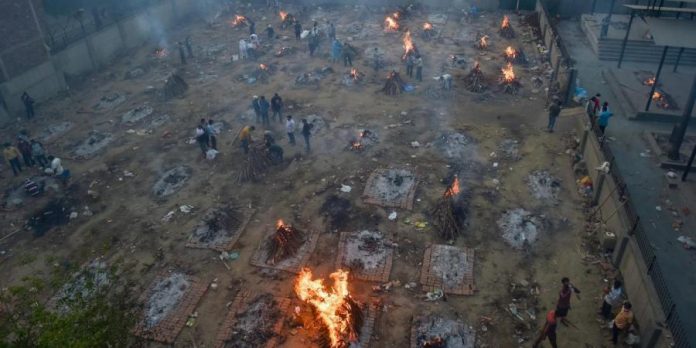 Images such as this one about dead being cremated in an open ground appear regularly on social media following a deadly spike in COVID deaths.

Congress MP from Malkajgiri in Telangana, Revanth Reddy, recently tweeted that India was having over two lakh new COVID cases every day and that the healthcare system was collapsing. He also posted a picture of a mass cremation on his Twitter account.

We cannot see the truth in Reddy’s claim in India first-hand, even as the world can see it. This is because of ‘mini-censorship’ on the media imposed by the government until it was exposed by MediaNama web portal. Not only Reddy’s, but 52 other tweets were also blocked out because those were critical of the government’s miserable failure.

The Central government that ‘locked down’ the whole nation the previous year to fight the corona virus has now chosen to block down the voices to hide corona failures. The government requested Twitter, which promptly complied, to censor 52 tweets.

Not only the voices of journalists and social activists, but the voices of MPs have also been curbed on Twitter. Indians are barred from seeing critical remarks of Moloy Ghatak, a West Bengal state minister; actor Vineet Kumar Singh; and two filmmakers, Vinod Kapri and Avinash Das. The web portal MediaNama has seen public disclosures of the orders made available by Twitter to the Lumen Database which receives and publishes disclosures from private entities, including social media companies, of legal takedown notices they get from governments and private entities all over the world, as per MediaNama.

A popular technology media news website, MediaNamaearlier exposed how the withholding of Rajya Sabha Member of Parliament Sukhram Singh Yadav’s Twitter account based on a Lumen Database disclosure happened. Such orders are typically sent by the Ministry of Electronics & Information Technology (MEITY) of Government of India.

The MediaNama also reported that the filmmaker and former journalist Vinod Kapri confirmed to it that he had received a notice from Twitter that his post was restricted in India. The website also reported the confirmation from others whose tweets were deleted.

Twitter is not like a newspaper or an independent journalist. It is just a business company ambitious of making huge profits out of using the news content and current events. They simply obey the request of the government to remove the comments as if that was a writ. Twitter or similar commercial platforms on cyberspace do not even feel aggrieved because of their lack of commitment for free circulation of all ideas, which the Constitution of India under Article 19 guarantees.

Was that a valid request?

Twitter-like organizations think that they are not bound by these obligations. When MediaNama contacted them, Twitter responded: “When we receive a valid legal request, we review it under both the Twitter rules and local laws. If the content violates Twitter rules, the content is removed. If it is determined to be illegal in a particular jurisdiction, but not in violation of the Twitter rules, we may withhold access to the content in India only”.

Twitter’s response needs further examination. It said: “In all cases, we notify the account holder directly so they’re aware that we’ve received a legal order pertaining to the account”. Twitter must share the legal order’s copy also. How can a ‘request’ from the government be treated as a legal order?

Also read: No state should clamp down on information shared on social media: SC

Twitter also claimed: “We notify the user(s) by sending a message to the email address associated with the account(s), if available. Read more about our legal request FAQs. The legal requests that we receive are detailed in the biannual Twitter Transparency Report, and requests to withhold content are published on Lumen.

The company claimed that it had notified users about their tweets’ censorship, and that they only remove COVID-19 misinformation if it advances a harmful narrative and is demonstrably false. If that is true, is criticism harmful? In fact, the censorship of criticism is harmful to democracy as the government will tend to become more dictatorial. How can Twitter say the ‘criticism’ is demonstrably false? In fact, demonstrably false and fake campaign is rampant on social media by official and non-official groups of various ruling parties in India. Fake news on social media is a serious threat to democracy.

What is that content which is unpalatable to the Union government? The MediaNama quoting anonymous sources reported that the Ministry feels social media was abused.

The multi-phase election in West Bengal is a very contentious issue, especially when rulers are irresponsibly addressing huge rallies unmindful of hazardous risk of COVID spread. It is in this context the criticism of West Bengal’s Minister of Labour and Law Moloy Ghatak who criticised that India would “never forgive” the Prime Minister for what he described as underplaying the seriousness of the pandemic, and for exporting vaccine doses to other countries. Comments like this, satiric remarks, comparisons and critical sentences were removed.

A tweet of ABP News Editor Pankaj Jha was calling out the difference in attitudes towards the Tablighi Jamaat event in 2020 and the Kumbh Mela.

Actor Vineet Kumar Singh’s Hindi tweet was that he was in Varanasi and that it was difficult to get medication. He criticised political rallies being held amid the pandemic.

Filmmaker Vinod Kapri had tweeted about the mass cremations with a video of one such cremation ground. In that tweet, Kapri made a sarcastic remark about how a promise to make more shmashānas (Hindu cremation grounds) had been fulfilled.

When contacted by MediaNama, the actor wrote: “India is facing biggest crisis of all times, thousands are dying every day because of lack of oxygen and medicines and it is my moral duty as a filmmaker and journalist to tell the truth, to expose this inhuman and immoral government who instead of supplying oxygen to dying patients, is writing to Twitter to take action against free and independent voices.”

There is a history of removal of some tweets. For instance, the Centre very strongly opposed certain contentious hashtag tweets like the #ModiPlanningFarmerGenocide hashtag etc. All those dozens of tweets were withheld.

What is to be done?

This is the time the aggrieved should question the Twitter’s unilateral action of removal of their comments without hearing from them. Social media platforms should have ombudsman with good experience of legal and constitutional issues to receive, hear and decide objectively a ‘legal order or requests’ to remove abusive comments.

Though it is a serious breach of freedom of expression, the remedy is not provided. Except Article 32 remedy of knocking the doors of Supreme Court, no other remedy is visible. Is it possible for the ordinary Twitter commentators to approach the Supreme Court? Does this mean that we have to surrender our freedom of speech at the feet of Twitter, which subserves the interests of a ministry of the government of India?

The censorship of comments though limited for Indian viewers should be strictly on grounds listed out under Article 19(2) of Indian Constitution which says: (2) Nothing in sub-clause (a) of clause (1) (“all citizens shall have the right to freedom of speech and expression”) shall affect the operation of any existing law, or prevent the State from making any law, insofar as such law imposes reasonable restrictions on the exercise of the right conferred by the said sub-clause in the interests of the sovereignty and integrity of India, the security of the State, friendly relations with foreign States, public order, decency or morality or in relation to contempt of court, defamation or incitement to an offence”.

The Constitution of India shall govern our expression, not Twitter.